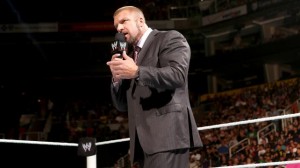 This week’s edition of Monday Night Raw scored a high grade in my book. First of all, I loved the Triple H and Randy Orton promos to open the show. Triple H plays a bad guy so well. His demeanor is perfect for the McMahon family. Orton is also best when he is a villain. Together, the two are so arrogant and cocky, the crowd really feeds off of it. Daniel Bryan is the perfect face to go against them.

Overall, just about all the segments had meaning this week, although I still feel that the segments involving the mid to under-card matches could be developed a bit more. I found it particularly interesting in the end when the entire roster stood onstage and did nothing to help Bryan. I was really expecting one of them to help out and become a new face of Raw. The WWE continues to establish the new Corporation with Triple H and the McMahon’s and I guess I can understand another week of letting them reign supreme.

One complaint that I have, which is more about the WWE in general, than Raw is that we are seeing the same guys compete against each other every week. The heels and the faces are faltering here. Neither group is getting a reaction from the crowd. Just look at the Cody Rhodes, Miz, Sandow, and Fandango feud. You have four very solid wrestlers, all with weaknesses, but they all have more upside than down. The Miz is undeniably the most solid of all, but none of them are getting over. I believe that this is going to cost Rhodes any chance of ever developing into a top-tier star, which I believe he can be.

Bryan and Seth Rollins had the match of the night, which ranked just ahead of the Christian and Orton bout. The pacing of the match and energy, was awesome. I think viewers really got a peak at how talented Rollins is. I think this may be a sign of things to come, and hopefully the separation of The Shield.

I was not a huge fan of the A.J. promo, but I understand it. I think it will be good for the Divas division. I believe she is the top wrestler in the Divas division, but she continues to be overshadowed by the likes of the Bella’s. Speaking of the Bella’s, if you haven’t caught the Total Divas show on E!, check it out. I find it very entertaining and interesting, even if it is a scripted reality program. It’s pretty cool to see a lot of the Divas and their male counterparts outside the ring. 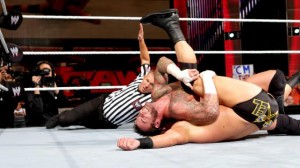 The C.M. Punk and Paul Heyman face off delivered once again. The only thing taking away from the match is Curtis Axel. Let’s face it, he’s bad. The guy needs major work. Any wrestling fan can see that he is no threat to Punk. This match at the Night of Champions pay per view will be a wash. Punk gains nothing from it. Hey will eventually destroy Heyman, but why keep throwing Axel into the mix. It’s a waste of time for fans. Wrestling fans damn near worship Punk. We do not need to be insulted by seeing him fight for the Intercontinental Title or a second rate wrestler. End Axel’s involvement please!!