‘Up’ out on Blu-Ray Comba Pack, DVD, and Movie Download November 10th. Enter to Win a Free Copy. 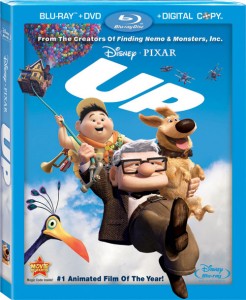 From the revolutionary minds of Pixar Animation Studios and the acclaimed director of MONSTERS, INC. comes a hilarious uplifting adventure where the sky is no longer the limit.

Carl Fredicksen, a retired balloon salesman, is part rascal, part dreamer who is ready for his last chance at high-flying excitement. Tying thousands of balloons to his house, Carl sets off to the lost world of his childhood dreams. Unbeknownst to Carl, Russell, an overeager 8-year old Wildnerness Explorer who has never ventured beyond his backyard, is in the wrong place at the wrong time — Carl’s front porch! The world’s most unlikely duo reach new heights and meets fantastic friends like Dug, a dog with a special collar that allows him to speak, and Kevin, the rare 13-foot tall flightless bird. Stuck together in the wilds of the jungle, Carl realizes that sometimes life’s biggest adventures aren’t the ones you set out for.

UP flies high with a pristine picture, theater-quality sound and hours of never-before-seen bonus features available only on Blu-ray™ Hi-Def. It’s an adventure that will send your spirits soaring!

Enter for a chance to win a FREE copy of “UP″ Blu-Ray Combo Pack! All you have to do is leave a comment below with the place you’d most like to visit if you could fly your house there! Winners will be randomly drawn, and notified via e-mail.

Good luck! And don’t forget to pick up your copy of “Up″ on  and DVD and Blu-Ray Today!

BUY UP ON DVD or BLU-RAY