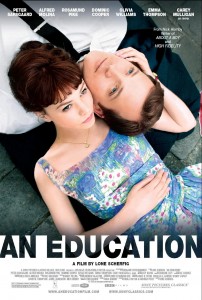 An Education is one of those little treasures of a film that sneaks up on you in not only the quality of the overall film but by the incredible turn by its star Carey Mulligan.

Jenny is a seventeen year old school girl in 1960’s England and is set on getting into Oxford for seemingly everyone around her.  Bright, pretty, and cultured well beyond her age, Jenny seems to have a pretty good head on her shoulders even if she thinks all the work she goes through is a bit much.  Enter David, a late twenties/thirty something man who spots Jenny on the corner in the rain and offers her cello a ride as he is fond of music and would hate to see it ruined and wouldn’t dare expect Jenny to accept a ride with a stranger.  She eventually hops in and the two hit it off quite well which leads to David and Jenny both looking for this relationship to go somewhere further.  Jenny’s parents are loving and demanding and are a bit taken aback by the prospects of David, but before they barely realize it he smooth talks his way on to Jenny’s arm and into the night for a show with his friends.  The two’s relationship grows and progress with the utmost respect to Jenny’s wishes and an unlikely romance begins to bud as Jenny begins to doubt her seemingly chosen path to attend Oxford.

This coming of age film feels both fresh and original while moving on at a whips pace.  The film flies by and Lone Scherfig and crew deserve serious props for assembling this refined picture.  Nick Hornby also wrote the screenplay and deserves major acknowledgement as well for creating a bevy of fleshed out and interesting characters with dialogue that snaps and makes you laugh.  The film’s mood remains light for most of the film with a couple of suspicious and down turns thrown in the films dramatic twists but nothing feels cheap or unearned and comes across as extremely natural.

Everything is fun and exciting here as we experience this interesting world through the eyes of Jenny and we feel as she does as our eyes open with hers to this world we have been hidden from.  The questions and issues the film also tackles from the time are neither forced nor forgotten and do a fine job of rising question to the absurdity of the era’s schooling methods.

The actors in the film are all top notch across the board as well starting first and foremost with its star Carey Mulligan.  Mulligan seizes the opportunity given the lead here and carries herself wonderfully and convincingly.  Demanding respect to Peter Sarsgaard’s David she always seems in control and while things might not be what they seem at times, once she is in on the rouse she shows how strong she is.  Mulligan also holds her own with the vets around here when it comes to make us laugh or go dramatically toe to toe and will probably be in the running for an Oscar after this turn and making herself one of the new it girls in Hollywood.  Peter Sarsgaard also gets to shine again and he is endlessly charming and convincing as David.  He is easy to trust and spins with the best of them lifting us seemingly off our feet like Jenny we get so caught up in his words.  Alfred Molina is also at his best as Jenny’s father bringing plenty of sweet tenderness and humor to the role and is both overbearing yet still very likeable and we never think his actions are unjust; which they aren’t.  Olivia Williams and Emma Thompson both walk fine lines of being overbearing B’s but walk their parts just right to keep them feeling honest and never dive into stereotype or convention.  Dominic Cooper and Rosamund Pike are appropriately beautiful and charming as David’s friends and help us buy into and fall in love with the world they open up to Jenny as they are both fun and exciting to be around.  Pike also captures the dimwit ness of her character without looking like an idiot and instead a respectable socialite.  And Matthew Beard deserves credit for creating the sad and simple Graham that doesn’t stand a chance.

In the end, An Education isn’t just one of the finest indie films of the year, but one of the best in general.  Fast paced, filled with great performances, and plenty of charm, drama, and humor to entertain the film rarely falters.  Everyone involved should be proud of what they put on screen and will possibly be rewarded for their work come award season.  Carey Mulligan turns in a star making turn and is worth the price of admission alone, but beyond her you will find plenty to love and fall for in this film that will pull you in from start to finish.

An Education is an A