Who Does Stallone Want as Villain for “Expendables” Sequel? 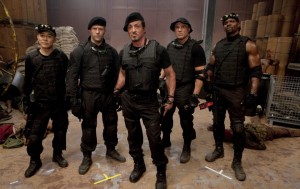 I saw The Expendables not expecting much, and there was probably the best idea for it.  The story is weak.  The acting isn’t great.  But the action is pretty cool with big set pieces that guys will love.  The film was successful at the box office so sequel talk began immediately.  Fanboys started to make their dream lists of action stars to appear in the new film.  But fanboys don’t make the film.  So who does Stallone have his eye on for the sequel?

Star of the first film Dolph Lundgren recently talked to Moviehole about what he has heard regarding the sequel so far:

“I know they were talking about someone really young, like that guy, what’s his name? The guy that was in G.I. Joe…. Channing Tatum, or someone like him to bring that audience.

Lundgren then commented on Jean-Claude Van Damme coming in for the sequel:

“Stallone said something like, “Yeah, I want you to break his fucking neck somehow…”. So, we’ll see what happens!”.

“So, I think that there’s a certain chance he’ll be in it. As a bad guy he would be cool. I think he should play a bad guy. It’s a great way to come back, you know, because people aren’t used to that, doing a whole bunch of evil crap. People will be like, “Woah, he’s killing all these innocent people! Jesus!” That’d make them feel something.”

I like the idea of Van Damme.  Not real crazy about Tatum.  But that’s just because I have a strong dislike for him as an actor.

Who do you think should be in the sequel?  Let us know in the comments below.