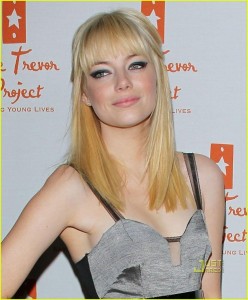 The lovely and talented Emma Stone has to be in a good mood lately.  She has been nominated for a Golden Globe for her role in Easy A.  She is co-starring in a huge superhero franchise.  And she know longer has to dye her hair red and can keep it her natural blonde for a while.  Now, we know she has job security at least for a couple of years.

Stone talked with Jay Leno last night about the upcoming reboot of the franchise and told him that “there’s a few Spider-men” she will be featured in.  This really doesn’t surprise me all to much.  Emma Stone is a name and face that the public knows.  Garfield had The Social Network, but outside of that a majority of audiences have not seen him on the big screen.  Stone will be able to sell this franchise a little more.  And she is a good actress so why would you get rid of her early.

But you never know.  We do know that Stone is playing Gwen Stacy, Peter Parker’s first love.  **SPOILER** In the comics she tragically died with Parker slightly to blame.  Obviously this new franchise does not have to follow the comics, but it would be interesting to see how they would.  Kill Stacy in sequel to bring in Mary Jane for the third one?

Will this new franchise even make it to three films?  Let us know what you think in the comments below.