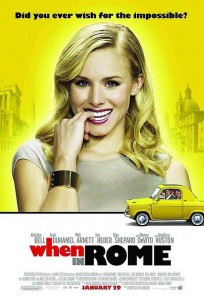 It didn’t take long to get a huge stink bomb of a movie this year in 010 and that movie is When in Rome.  The movie is so poorly written, is almost devoid of humor, is absolutely absurd, and gets nothing out of a decent slate of talent that made the unfortunate decision of taking on a role in this piece of… well you get the point.

I was groaning and restless from the get go as we quickly jump into absurdity and cliché that inhabits every romantic comedy that feels like it has to follow the formula.  Beth,Kristen Bell, a successful curator who has a big event coming up that could make or break her career, gets a drop in visit from her younger sister who has just met a guy and is getting married after two weeks of knowing him.  Within seemingly a matter of days, Beth and all of her family and friends of the family are in Rome where an elaborate and expensive wedding is being held; how it was planned and so well attended in a mere matter of days is just dumbfounding.  Logistics aside, Beth meets the handsome and charming Nick, Josh Duhamel, who sweeps her off her feet.  Of course Beth is ready to go for it but fails into a drunken stupor after seeing Nick schmoozing another girl from afar.  In this stupor she takes these coins from a sacred fountain of love which causes every owner of said coin to fall in love with her.  Four strangers and apparently Nick end up stalking Beth vying for her love and attention and hilarity ensues.

Actually, it doesn’t, in fact the film made me audibly laugh on only a couple of occasions and that is mostly because of my love for a number of actors that wade through this attempt at humor and shine through in the slightest bit that it made me chuckle.  Every joke is seen from a mile away, as is every plot twist, and you will be begging to leave the theater by the time it is all sad and done.  In fact, when watching the film the negative burned out right before the third act and it took every once of strength and resolve in me to not get up and just leave.  Mostly I stayed just to make sure something good didn’t come out of the work of some of the actors I enjoyed here; it didn’t and I can fairly report to you that there is no reason to ever see this film.  Throughout the whole film my girlfriend constantly leaned over to me and said how horrible this film is and she thinks any romantic comedy is decent and watchable 95% of the time.

And the crazy thing is it wasn’t even like the actors were just awful or anything.  A couple faces don’t really do a whole lot, Jon Heder and Dax Shepard’s characters are one note characters that get old quickly and neither brings much to the picture.  Danny Devito shows a bit of heart and grins and bears it through his scenes and fairs as well as he can.  Will Arnett at least seems knowingly aware of how awful the film is and just goes for broke with the silliness of his character.  Josh Duhamel is charming and likeable as is Kristen Bell in the lead roles but are both unfortunately forced to labor through the awful writing.  The director Mark Steven Johnson gets nothing out of his actors and any humor, like previously said, is on the skills of the actor.  Johnson just completely missed the boat on every level here.

In the end, When in Rome is not worth seeing, ever.  Sure there are a couple chuckles and the two leads are pretty and charming but this isn’t anywhere close to being enough to warrant putting yourself through the unequivocal mess of a film.  If you pay to see this film you are a fool and will regret it within the first few minutes as you would have been better off throwing your money in a fountain with the hope that someone would take it out and cause some sort of spell to be cast over you that will erase any knowledge of you seeing this film.

When in Rome is an F

Another take from Kevin:

“When in Rome” is director Mark Steven Johnson’s attempt to pull off a romantic comedy, after directing a couple of lack-luster action flicks. The result? A cliché, ridiculous mess of a movie that is neither unpredictable, or enjoyably to sit through.

Beth (Kristen Bell) is a curator at the Guggenheim Museum, mainly in charge of finding rare and sought after art pieces to display during parties and galas. She plays the same part that we have seen so often before in romantic comedies of late – the workaholic, who just can’t seem to find a guy that she likes as much as her job. At the beginning of the movie, she is put in a ridiculous situation that embarrasses her in front of the attendees of one of her events – where everyone thinks that she has just become engaged. This disastrous moment leads into a conversation with her sister who appears at her door, only to bring news of her engagement after barely knowing her fiancé for two weeks.

Flash forward to Rome – the site of Beth’s sister’s extravagant wedding. Here we are introduced to the real plot of the movie, and are introduced to all of the main characters. Beth meets her love interest, Nick (Josh Duhamel), as he stumbles down the isle as the best man of the wedding. It is from here on that we are introduced to his bad luck, where he always seems to trip and fall – and basically get into any other calamities that you could think of (including, but not limited to: walking down the street and falling into an open cellar,and walking into a pole). After Beth gets into a few silly predicaments at the wedding, and Nick being her knight in shining armor throughout, the two of them start to develop an instant romance. But all of this is shattered – when the main character of our romantic comedy predictably sees Nick with another woman later on, and her giving him a kiss.

After having her heart broken, after finally finding someone who she has fun with, Beth goes outside to the fountain of love. It is at this fountain, that people say you can throw a coin into the water, and you will find true love. Angry at the thought of love, with a bottle of wine in hand, Beth trudges through the fountain picking up coins and pocketing them. It is at the exact moment each coin is removed, that we see the cast of the film – one by one – drop what they are doing as they are enamored with the thought of love. They include an artist (Will Arnett), a street magician (John Heder), a model (Dax Shepard), and a Sausage Salesman (Danny Devito). Throughout the movie, the aforementioned characters all try to chase down Beth in an attempt to get her to reciprocate her love. Unfortunately this only leads to a plethora of unfulfilling comedic performances – most of which are too low brow and absurd to be funny.

There are only a few parts in the film that were laughable – most of which were only salvaged because of the comedic talent of the actors involved. It is too bad that even these comedians couldn’t save the movie. Even the two lead actors – Kristen Bell and Josh Duhamel – are likable, and share a good on-screen chemistry. But the ridiculous situations they get into and the poor script negate anything positive that they achieve. In the end, the film falls into a pile of romantic comedies that follow the same formula for disaster.