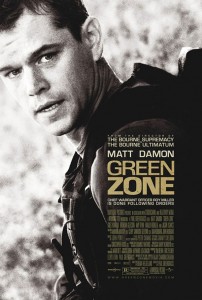 The more I see of this film, the higher hopes I have for it. Now that Bourne 4 looks to be a no go, this might be the last chance we get to see Matt Damon in this type of role for a bit.  I would have never thought when Matt Damon first came on the scene that he would play a viable action star. His intelligence and demeanor on screen make him a force to be reckoned with.  I’m hoping that it won’t be a rehash of the Bourne series, but with an Iraq setting. Although, there could be worse things. My one other fear is that all the intense action scenes shown in the trailer misrepresent it to audiences. I’m looking for an intelligent thriller, with some good action set up. Regardless, I’m just happy that it’s March release date is just around the corner.

Chief Warrant Officer Roy Miller (Matt Damon) is certain that Hussein has been stockpiling WMDs in the Iraqi desert, but in their race from one booby-trapped site to the next, they soon stumble across evidence of an elaborate cover up. As a result, the objective of their mission is inverted, and Miller realizes that operatives on both sides of the conflict are attempting to spin the story in their favor. Now, as Miller searches for answers made ever more elusive by covert and faulty intelligence, the truth becomes the most valuable weapon of all. Will those answers prove pivotal in clearing a rogue regime, or escalate the war in a region that grows increasingly unstable with each passing day? Amy Ryan co-stars as the New York Times foreign correspondent who travels to Iraq investigating the U.S. government’s allegations about weapons of mass destruction, with Greg Kinnear appearing in the role of an additional CIA officer, and Antoni Corone essaying the role of a colonel. Brendan Gleeson rounds out the main cast for this Universal Pictures production. ~ Jason Buchanan, All Movie Guide