What is the Upcoming “Toy Story” Short Going to be About? 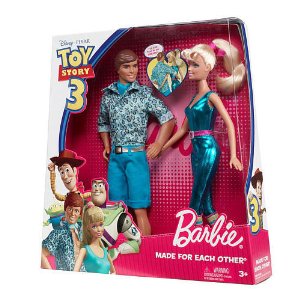 It has been known for a little while that the short that will be featured before Pixar’s Cars 2 would be centered around characters from Toy Story in particular Ken and Barbie.  I personally love the idea.  I think that Pixar should leave their perfect trilogy of films alone and just down shorts to lets us revisit all of the characters from that world.  So what will this first short actually be about:

Bonnie is off to Hawaii, and Barbie and Ken are excited to go along on their first tropical vacation! But when they’re accidentally left behind, it’s up to Buzz, Woody, and the rest of the toys to create a Hawaiian paradise right in Bonnie’s room.

Sounds great to me.  I loved Ken in Toy Story 3.  How can we resist more Michael Keaton?  This synopsis came from an upcoming storybook featuring the Toy Story characters.

What do you think?  Should Pixar do original shorts like they have been or should they reuse characters already in their arsenal?  Let us know in the comments below.