Let me start by saying that I did not see every film that was release in 2010.  Thankfully I was able to avoid films like Sex and the City 2 and Grown Ups.  But I did miss Blue Valentine and The Illusionist which I very much want to see.  But here I give you my top ten favorite films that I have seen.  Some of them were easy to rank.  The middle four could probably be switched around a bit.  But these are definitely my ten favorite.  I also wanted to talk about my worst, most underrated and most disappointing films of the year.  I sometimes find these three to be more interesting than the ten best.

Like I said, I dodged what most people would consider the worst films of the year, but I still took some bullets.  Legion was as bad as I expected.  Fortunately for everyone sitting in theaters, Jonah Hex was nice and short to make the experience more like pulling off a band-aid.  But Skyline topped both of these.  Now when I look back on it I’m not sure if there is anything I liked about the film.  Yeah, the special effects were not bad, but obviously they spent every dollar they had paying for them.  Cause the money certainly did not go into the script or actors.  This is a film that would probably be better if you didn’t see the last ten minutes.  So just walk out of the theater at that point to avoid the worst ending in of movie of the year. 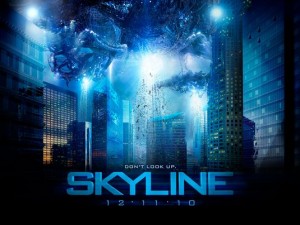 The Wolfman was not that bad people.  I watched it again just to make sure.  I feel like the biggest complaint on this film is that it lacks suspense and scares.  I can agree to an extent, but it seems to me that Johnston was not out to make a scary monster movie.  He made a great homage to the classic Universal Monster films.  All of the acting in the film is quite good in particular del Toro’s performance.  Yes, the love story feels a bit rushed, but that is just an editing issue.  A lot more scenes between Blunt and del Toro can be found on the DVD.  It is not a perferct werewolf flick, but it is a lot better than critics give it credit for. 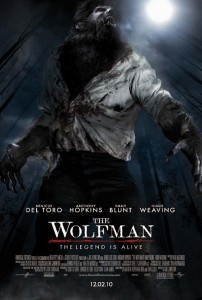 There were three films in the running for this award, but the winner was head and shoulders above the other two.  I was really excited about Salt.  I loved the director and Jolie in the role, but too many plot holes left much to be desired.  TRON Legacy looked great, but the story was severely lacking.  I ended up being more bored with the film than anything.  This year’s winner goes to Alice in Wonderland.  I usually love Tim Burton, and Johnny Depp has done some exceptional work lately.  But I was so bored sitting through this film.  The special effects did nothing for me.  Crispin Glover’s CGI body annoyed me, and the Mad Hatter’s mood changes were perplexing.  I had so much hope for this film.  But I got nothing in return.

10.  How to Train Your Dragon – I will just start by saying that this was a great year for animated films.  This movie really surprised me.  I had heard a lot about it, and just how good it was.  But I was not expected as much action in the film.  Dreamworks Animation has not really impressed me.  I like the first two Shrek films, but after that I was not on board with any of their films.  The film was just different than I expected it to be.  Not as kid friendly as I anticipated.  While I enjoyed it, I respectfully disagree with those who say that this film should win Best Animated Feature at the Oscars.

9.  Shutter Island – Audiences had to wait a little longer to see it, but when it finally did come out it did not disappoint me at all.  I read the book about two months before I saw the film so I knew what I was gonna get, but that didn’t detract for the experience at all.  I love all of the performances in this film.  Especially Ruffalo’s who got very little recognition for the film.  I’m not going to get into it all because I already wrote an entire article about it.  But if you tell me you knew how this film was going to end I will call you a liar.  Speaking of ending, the movie differs ever so slightly than the book.  I like the book more but still a great movie. 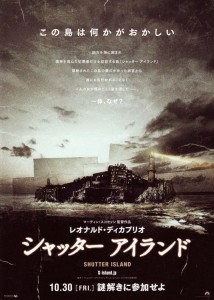 8.  Black Swan – I have to say that this film was going to be much higher on my list, but upon second viewing it did not quite attack me like it did the first time.  But you can not deny the performance Portman gives which, in my opinion, should win the Oscar hands down.  The movie is extremely intense and captures the audince on this emotional roller coaster the main character is taken on.  I think this is easily Aronofsky’s best film. 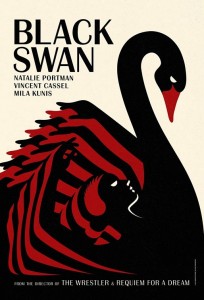 7.  The Ghost Writer – I really don’t have much to say other than that I enjoyed the film immensely.  Ewan McGregor gives a great performance as the nameless lead.  Pierce Brosnan also turns in great work.  Despite what you think of Polanski, you can’t deny that he directs a great thriller.  I really wish more people would see this film so if you haven’t check it out.