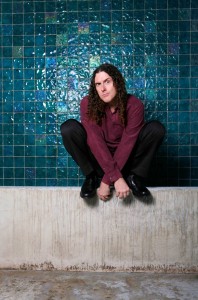 Weird Al is back!

This coming Monday, July 12, Weird Al Yankovic will be returning to the St. Charles Family Arena for the first time since 2008. The show starts at 7pm. Tickets are on sale now, and can be purchased at the Family Arena Ticket Office and all MetroTix locations (including Macy’s and select Schnucks). Seating available is: 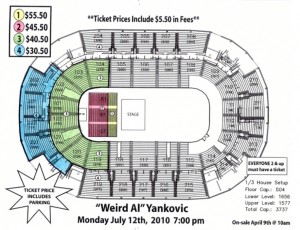 “Weird Al” Yankovic, the undisputed king of pop culture parody, has sold more comedy recordings than any other artist in history. In a career spanning nearly three decades, he has amassed 28 Gold and Platinum albums, 7 Gold and Platinum-certified home videos and 3 Grammy Awards (with 12 nominations).

Al’s most recent CD “Straight Outta Lynwood” debuted at #10 on the Billboard charts, making it Al’s highest charting album in a long and illustrious career that continues to thrive. The single “White & Nerdy” also debuted at #10 on the Billboard Hot 100 chart, and was #1 on iTunes for 5 weeks straight. The music video for “White & Nerdy” was #1 on VH-1 and on iTunes, both for 5 weeks, and quickly became a viral phenomenon, viewed over 100 million times on the internet. Straight Outta Lynwood added two more nominations to Al’s Grammy legacy, for Best Comedy Album and Best Surround Sound Album.

• 2008/2009 – “Internet Leaks” (EP – Volcano/Sony) – 5 digital-only releases – 4 original songs and 1 parody. Each song accompanied by its own music video by major video director including Liam Lynch, Josh Faure-Brac (Current TV’s SuperNews) and Jib Jab. Songs to be included on new studio album to be released later in 2010.