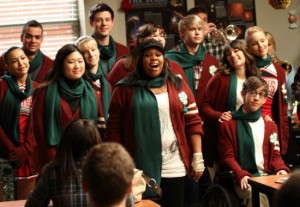 Let me start off by saying that ­­I did not have very high hopes for this week’s Christmas episode of Glee. For some reason, the warm comfort of Christmas music and the cool, sleek style of Glee just didn’t seem like they’d mesh. I guess I was right and wrong.

The problems start right off the bat. The character of Brittany has been a weekly punching bag of dimwitted comic relief; however this week they take it a bit too far. Going from ditzy blonde to almost pathetic childlike behavior, Brittany reveals her wholehearted belief in Santa Claus and in what should have been a chuckle-of-a-one-liner, Glee takes this premise and essentially builds the entire episode around it, getting more pathetic and preposterous as it goes along, its only redemption comes at the very end – but it pays off pretty well.

The episode’s other story arc involves the staff’s Secret Santa exchange and in an ironic twist that we only happens in television, Mr. Schue gets Sue as his gift-recipient…shenanigans ensue and we find out that Sue has rigged the drawing and has replaced all the names with her own. After Sue gets her presents, the rest of the staff finds out and takes them back; and in all her embittered glory, Sue literally goes “Grinchy” and steals them yet again. It would seem that only a Christmas miracle could save the day at this point, but if you’ve ever seen “How the Grinch Stole Christmas” you probably know how this is going to end.

If you haven’t realized by now, music hasn’t yet been mentioned once in this article – this is because as in the actual episode, the music seems to take a back seat to the story…and I haven’t decided whether that’s a good thing or a bad thing. Christmas music doesn’t seem to fit the Glee kids exceptionally well, the two best performances are Kurt and Blaine’s “Baby It’s Cold Outside” and Finn and Rachel’s “Last Christmas” by Wham!. The others are utterly forgettable.

It struck me as odd that for a show with two Jewish characters that make almost weekly references to their Jewish faith that there was no mention of Hanukkah or the fact that public school is openly celebrating Christmas without even a superficial rationale. It simply doesn’t make sense that the Rocky Horror episode would spend so much time addressing the issue of “what’s ethical in school” and yet in this episode, it’s not addressed whatsoever.

With the exception of Finn, the characters’ personalities all seem to be consistent with their established roles. Finn drifts into cartoonish idealism; but ultimately it works for the episode. The other notable character performance is that of Dot-Marie Jones’ Coach Beiste, and as always she is nothing short of brilliant.

I suppose the issue with most Christmas episodes is that writers are often afraid to walk that fine line between cheesy and heartwarming. Go too far and people will say it’s a Pollyanna-ish attempt at young idealism…don’t go far enough and you’re essentially just adding a red and green color palette to boost ratings. This week Glee may have gone too far in some respects, but for anyone who isn’t a complete Scrooge or Grinch, they’re sure to find something in this episode to brighten their holiday spirits.­­ If you’re a fan of Glee, I recommend soaking it up now, because it looks like we’ll be Glee-less until 2011.

What did you think of tonight’s episode? Leave me a comment below.