Right now, it’s a good time to be a football fan in St. Louis. With big wins by two of the “local” football teams, this weekend could potentially be a turning point in the seasons for both teams. I’ll give a brief post on both of the wins by Mizzou and the Rams.

I’ll admit, I didn’t get to see this game live. I was in Quincy, IL, with my lovely friend Elizabeth and her family watching the Hawks somehow score 50 points and lose to Iowa Wesleyan by 12 points. But this game was a huge boost to Missouri’s hopes for a Big 12 title as well as its national ranking. I like to end stuff on a high note, so I’m gonna start with the bad first.

What Went Wrong for Mizzou

– The ground game still has yet to establish itself as a top unit. This didn’t really matter as Blaine Gabbert produced a huge day, but in the next few games, it’s going to be important that the run game open up defenses and allow the passing game to breathe a little bit. Kendial Lawrence ran the ball 11 times for 44 yards and a TD, and Henry Josey added 29 yards on five carries, but overall, the Tigers got just 56 yards on 25 carries. The ground game ranks 84th nationally with a 131.8 average per game. With two huge games coming up against Oklahoma and Nebraska, it’s obvious Missouri misses the presence of Derrick Washington.

– The defense failed to create a turnover, although again, this wasn’t really an issue, as Missouri didn’t turn the ball over themselves.

– For the second time this season, Missouri failed to convert an extra point attempt. This comes after Mizzou went nearly five years without missing an extra point. At one point, they converted 252 consecutive extra points, falling ten shy of the national record. Every point could count from this point forward. Grant Ressel did a terrific job last year with field goals and extra points, so hopefully this can get fixed quickly.

– As mentioned before, Gabbert had a huge day, throwing for 361 yards and three touchdowns without tossing a pick. Questions about his hip seem to be answered. Missouri’s gonna need him to continue to play at a high level.

– The defense continues to make inroads, allowing just nine points to a very potent offense. The defense ranks second nationally, allowing just 10.8 points per game. Mizzou’s secondary is one of the most underrated in the nation, as most of Johnson’s passing yards came in the fourth quarter with the game well out of reach. Their next big test comes against Landry Jones.

– The receiving corps, while lacking a single big name, continues to be a strength. Wes Kemp, who has struggled with consistency this year, had a terrific game, catching ten passes for 89 yards and two scores. T.J. Moe continued his monster year with six receptions for 110 yards and a score, and Malcolm Egnew added ten catches for 87 yards. The passing game ranks 19th in the nation with 282.8 yards per game.

With the win, Missouri finds itself already bowl eligible and ranked 11th in the BCS standings (16th in the Coaches Poll and 18th in the AP poll). With Nebraska losing, Mizzou finds itself in the driver’s seat for the Big 12 North. The game of the year is coming up Saturday with number 1 Oklahoma coming to Columbia. Win this game, and Missouri could find itself in the top 5. Hopefully Aldon Smith, who has been out with a broken bone in his leg, can return this week. The defense has played well in his absence, but his return could provide a huge boost to Missouri’s upset hopes.

Raise your hand if you saw the Rams actually winning this one. Coming off a 44-6 humiliation to a winless team, having lost their top receiver for the season, there aren’t many people who picked the Rams to beat San Diego, who boasted the top-ranked offense and second-ranked defense in the league. But the Rams find themselves a surprising 3-3 and just a half game out of the lead for the NFC West.

– Pat Shurmur is taking a lot of heat for the second half play-calling, and perhaps deservedly so. After Sam Bradford carved up the San Diego defense for 172 yards and a touchdown in the first half, he threw for just 26 yards in the second half. The Rams raced to a 17-3 lead at halftime, but went into a defensive mode in the second half.

Certainly a win is a win. But San Diego made adjustments and did their best to contain Steven Jackson, which they did until the final drive. If the Rams are to win more and eventually contend, they have to learn to put games out of reach. Steve Spagnuolo sort of pleaded ignorance on this, saying he was focused on the defense in the second half, but in an era when he preaches accountability, as the head coach, he must get the ear of the offensive coordinator and be as aggressive on offense as he is on defense.

– Speaking of Bradford, he managed to go a game without an interception, the first in his career. But he was very fortunate, as there were at least two passes that could have been picked off. Each time, he was staring down his receiver, telegraphing his intentions to the defense.

– Helmet to helmet hits are the current hot-button topic in the NFL, and on Sunday Bradford was the recipient of such a hit from Chargers linebacker Kevin Burnett. Fortunately, Bradford suffered no ill effects from the hit, which took his helmet off, but such a hit in the future could lead to a concussion or worse. Bradford’s tough, and his resiliency thus far this season has allayed some of his durability questions, but a concussion can have a tremendous impact on a player’s health in the immediate future and down the road. His decision making in that instance is questionable, as he could have either gotten rid of the ball or slid.

– Jackson ran for 100 yards for the second consecutive game, running for 109 yards and a touchdown on 29 carries. When the team needed him most at the end of the game, he responded, rushing for 28 yards on five carries to maintain posession and allow the clock to run out, preventing San Diego from getting another chance at the ball. 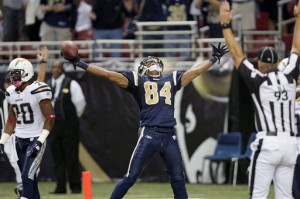 – With Mark Clayton and Donnie Avery gone for the season, the receiving corps is already dangerously thin. But in steps Danario Alexander, the top receiver in college football last year. The Mizzou product, playing in his first game, was targeted five times and tallied four receptions for 72 yards, one of which was a beautiful 38-yard score. Alexander outran the coverage and dove into the endzone and came up with the ball. His previous reception, two plays earlier, was a terrific 16-yard fade that perhaps none of the other current Rams receivers could have made. Alexander could be a huge steal, as he went undrafted, but the Rams must temper optimism with caution. He reported his surgically-repaired knee was sore after the game. Whether this is typical wear and tear or something more serious has yet to be determined, but Alexander could play an integral role in the offense this year.

– The defense is showing the rest of the league it’s for real, holding the top-ranked offense to 287 yards and just 17 points. The Rams pressured Philip Rivers all day long and got seven sacks, a total they hadn’t reached since 2003. After getting just 25 sacks last season, the Rams already have 17 six games in. Minus the debacle in Detroit, the Rams have given up 13.8 points per game, which would rank second in the league. As it is, the Rams are still a respectable 11th with 18.8.

– After a somewhat rough start to the season, Josh Brown came up huge, nailing a 48-yard field goal that proved to be the difference in the game.

Much work remains to be done, but the Rams are doing far better than anyone expected. Had the first two games been played with the progress the Rams have made, who knows, they could even be 5-1 or 4-2. Up next, the Rams head to Tampa Bay, who was recently throttled by New Orleans. It certainly won’t be easy, but it looks to be a winnable game, something the Rams will need if they’re to start enjoying the level of success they once had.