Watch WWE Pay-Per-View Events at Murphy’s on 21 in St. Louis 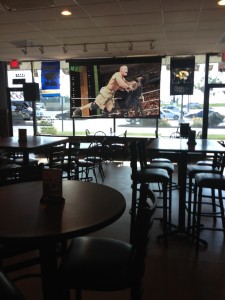 Dramatization of pure PPV awesomeness at Murphy’s on 21.

Ever since the closing of the Rec Room in South County several years ago, it’s been hard for WWE fans in the area to find a spot to watch pay-per-views. While the Stratford Inn showed a handful of PPVs shortly after the closing of the Rec Room, that only lasted a short while. Once that bar closed, wrestling fans were left with nowhere to go on Sunday nights for the monthly events. While some may have opted for watching at home with friends, others may have simply given up until they could rent or buy a DVD  – or stream online.

Luckily St. Louis wrestling fans will now have another option, as Steve Murphy, owner of Murphy’s on 21, has opted to make his bar a blast zone for all WWE pay per views.

“We started showing them back at the Royal Rumble,” Murphy said. “I’ve been a wrestling fan all my life, and have never really gotten away from the atmosphere.”

The bar, which is located at 13226 Tesson Ferry Road, celebrated their grand opening back in January. The bar has been a safe haven for wrestling fans ever since. Wrestling fans of all ages are welcome at the bar. There is a $5 cover for each fan to get into the bar to watch the event.

At the last WWE pay per view, Money in the Bank, the bar was filled; in fact it was standing room only.

The drawing point for a lot of the customers at Murphy’s on 21 is the 12 ft wide projection screen that is used for their pay-per-views. On the night of the event, Murphy’s will also feature an hour long preshow live in the bar starting at 6 p.m., discussing the matches of the night and feature trivia questions for prizes.

Murphy said while he is a big wrestling fan, he is also hoping to do something with fantasy football at the bar, as well as possibly make the bar a home for a fan club of an NFL team. Murphy’s on 21 will also feature the Sunday Ticket during the NFL season.