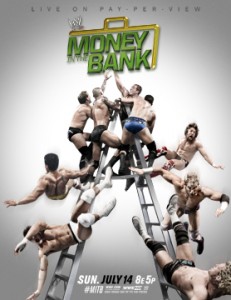 Apologies for the late column this week, but I was on vacation in Jamaica. After a 12-hour day of traveling, the first thing I did was fire up the old computer and watch a streaming version of WWE Money in the Bank. As tired as I was, I was quickly awakened by the high-energy Money in the Bank match the opened the pay per view for the World Heavyweight Title briefcase.

This match featured Cody Rhodes, Damien Sandow, Fandango, Jack Swagger, Antonio Ceasaro, and my personal favorite Dean Ambrose. Despite not getting a lot of push on Raw, this match was a 10 out of 10. It had several entertaining spots, as every competitor pushed their bodies to the limit. It is one of my personal nominees for match of the year, so far. I really thought Ambrose would get the win, with his friends from The Shield interfering, but in the end it was none other than Damien Sandow getting the win, after screwing over his friend and tag team partner Rhodes. Speaking of Rhodes, he was busted open during the match, which I felt was a career defining performance for him. He stole the show, as the crowd was favoring him most of the match. Nonetheless, it was Sandow who won the briefcase. 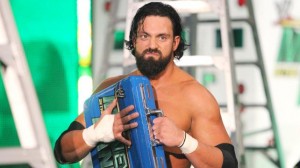 After the match, Brad Maddox, the new general manager of Raw came out to honor the recently fired Vickie Guerrero. This was nothing but filler, as Maddox basically mocked Vickie. I’m sure this will be an ongoing storyline leading to Summerslam.

The next match featured The Miz vs Curtis Axel. Axel did not have Paul Heyman at ringside and was able to retain the Intercontinental belt without assistance from Heyman. I thought the match was rather dull and boring. The Miz is a mess right now. Is he a face or a heel? The WWE needs to quit trying to make him the next Ric Flair. I like that they kept the belt on Axel, even though I think he’s bland and very raw on the microphone. While I’m not a fan, they need to continue to push the kid and give him a chance. After all, he’s Mr. Perfect’s son. This match suffered because of the great match it had to follow. Any wrestler would have struggled in this situation.

AJ Lee and Kaitlyn were up next for the Diva’s Title. Again, this match felt more like filler than anything. It’s clear that the Diva’s division is suffering from a lack of wrestling skill. Lee is clearly head and shoulders above any other woman in the WWE. She is the only woman worthy of holding the title at the moment. Her finishing move, the Black Widow, is pretty cool to see. She finished Kaitlyn off with the move in the match. With a second pay per view loss in a row for the title, it appears that Kaitlyn should be done for a while. It will be interesting to see who Lee feuds with for the title next. 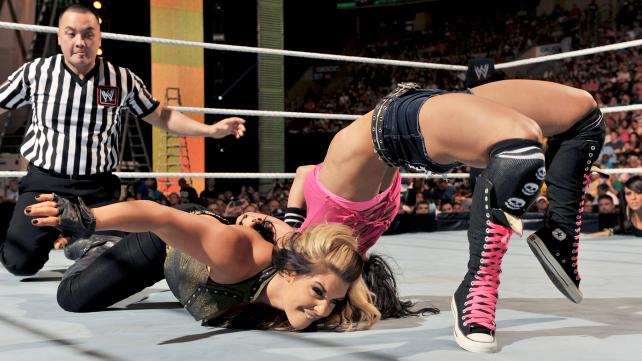 Another match that I wasn’t really looking forward to was Chris Jericho and Ryback. Jericho is wrestling royalty. He’s one of the greatest of all-time, but Ryback is about as interesting as watching paint dry. Surprisingly, the match wasn’t too bad. Jericho did carry the entire match, and wound up losing after attempting a lion sault and missing. Ryback curled him up to score the victory. This feud was not the greatest and was pretty much one sided. The WWE has turned a one-time monster into a cry baby. Jericho’s constant ripping on Ryback, calling him ‘Cryback,’ didn’t help matters. It will be interesting to see how WWE handles Ryback from here on out. He is not ready for a run at the top, but could still be utilized as a destructive force. As for Jericho, rumors are he will be taking time off to tour with his band Fozzy. He will probably be leaving after Summerslam, if not before, as it looks like he may have an injured leg. It’s clear he is favoring a leg in his matches. Maybe it’s time for the former ‘Dancing With the Stars’ contestant to take some time off. 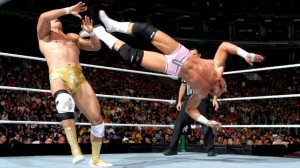 The World Heavyweight Title match between Dolph Ziggler and champion Alberto Del Rio, was without a question the best match the pair have had. While it was a shame that it ended in a disqualification because of the interference of AJ Lee, I’m happy that this will definitely end the relationship between Lee and Ziggler. The match itself featured a number of great near falls. Ziggler, who had suffered on the mic as of late due to poor writing, looked like a star. He has the swagger of a young Shawn Michaels. If the WWE is looking for someone to be the face of the company and replace John Cena, Ziggler is the guy. He is phenomenal, plain and simple. As Ziggler walked out of the ring, the crowd chanted “You screwed Ziggler,” at Lee. Philadelphia fans are always a hoot to watch at a wrestling event. Earlier in the match when Lee first came to ringside, the camera caught a larger man in a Phillies hat yelling “AJ, I love you!” It was pretty comical. 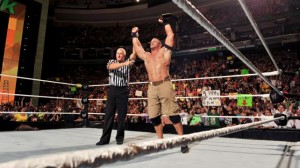 John Cena and Mark Henry were up next. One of the freshest feuds to hit the WWE in a while ended with a resounding thud. Yes, Cena won. Was there ever a doubt? Every wrestling fan in the world probably knew that Henry wouldn’t be given a proper push. Shame on the WWE for doing a great worker like Henry that way. As usual, Cena was beaten down the entire match, only to pull out the victory in the end with his lame version of the Crippler Cross-face, titled the STFU. It’s so lame. Once again, I am left wondering when will the WWE remake Cena’s character. Yes, he’s a great person, with all the time he contributes to Make a Wish, but he needs a character change. And, for crying out loud, get the man a legitimate opponent who fans believe can beat him! 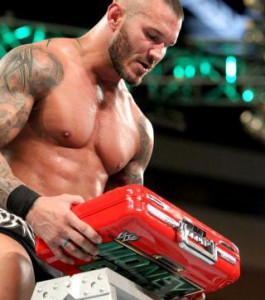 Finally, it looks like St. Louis’ own Randy Orton will be getting another shot at the WWE title. The 9-time champion won the WWE Title All-Stars Money in the Bank match. While I think the first Money in the Bank match of the evening was a bit more exciting, the Raw match had its exciting moments. One featured Sheamus being knocked off the top turnbuckle onto the floor, but before going to the floor, he fell through several ladders. It was one of the sickest falls I’ve ever seen. Rob Van Dam, the fan favorite of the night, looked great, even if he is 42 years old. He took several tough falls, having his head busted open at one point. Daniel Bryan looked to have the match in hand, but that led to Curtis Axel interfering and taking him out. While on the floor, CM Punk hit Axel with the GTS. This prompted Heyman to run out to the ring. He began to yell at an unconscious Axel. After chastising his star of the future, Heyman began to cheer on Punk, calling him his best friend. As Punk was about to pull down the briefcase, Heyman shoved a ladder into his back several times, knocking him down. He then busted Punk open by ramming a ladder into his face. Just when it looked like RVD may win the MIB, as all the competitors lay on the floor battered and bruised, Orton came to and RKO’d Van Dam off the ladder. He then climbed it and grabbed the briefcase to become Mr. Money in the Bank. As the pay per view came to an end, Orton stood atop the ladder in the middle of the ring, while Punk laid outside, dejected, nearly in tears.

Overall, a phenomenal pay per view as far as story telling goes. There were some matches that were duds, like the Cena/Henry bout. But in the end, the two MIB matches stole the show. There are so many potential storylines that the WWE can run with and that’s what makes great television. Let’s hope the WWE can expand upon a solid pay per view and continue the run with 5 weeks of great storytelling leading up to Summerslam.