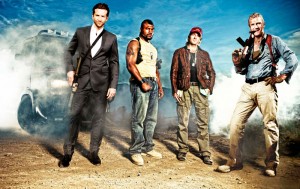 The A-Team cast is basically a group of people who have transcended where they were in pop culture in the past couple years. Bradley Cooper has made his way onto the A-List with The Hangover, Liam Neeson had international hit Taken (and an unfortunate family loss), Sharlto Copely gave an eye popping performance in District 9, and Rampage Jackson is a UFC fighter who is embedding himself in arenas outside of the sport. So, this movie has plenty of star power, but will it have the chops to be a big summer blockbuster? I’m thinking it will be ridiculous action that will be great for a summer popcorn flick

The current trailer is extremely lo-res. It will be replaced with a hi-res version when available. If you would like to see the trailer in full theater glory it should be playing before Daybreakers.