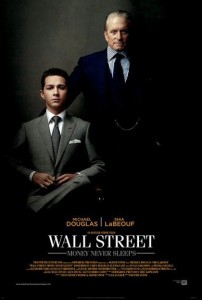 Michael Douglas returns as Gordon Gekko, the role that won him an Oscar, in the cumbersomely titled sequel Wall Street: Money Never Sleeps. The film opens in 2001 as Gekko is being released from prison having completed an 8-year sentence for the insider trading scandal from the first film. As he reenters the world, abandoned by his family and devoid of money, he is purportedly a changed man. Gone are limos and lavish mansions. In their place are a MetroCard and an apartment. (Admittedly, the apartment is still pretty lavish but it’s nowhere near as opulent as the homes he used to own.) While he has no money he still posses the charm and charisma seen only in the best of snake oil salesman. And it’s a pretty safe bet that’s all he’s going to need.

The movie quickly moves forward to the year 2008. Jake Moore (Shia LaBeouf) is hotshot up-and-coming stockbroker who is engaged to Winnie (Carey Mulligan), Gekko’s estranged daughter. Winnie has shunned the world of finance (not counting the stockbroker she’s sleeping with) and instead has focused her attention on running a leftwing (their words) website. When the two see Gekko working the talk show circuit hawking his new book Is Greed Good? they have opposite reactions. She’s repulsed. He’s intrigued.

The story takes place against the backdrop of the financial meltdown (you remember the financial meltdown, don’t you?) and Gekko is the lone voice in the wilderness decrying the calamity to come. The film uses the benefit of hindsight to create the illusion of prescience. Gekko is viewed with derision by his present day counterparts and, as they openly mock him, we can all laugh at their hubris. It’s the financial equivalent of The Wedding Singer’s jokes about parachute pants.

The plot is convoluted affair. It’s jumble of phrases that we hear often but that most of us have no real grasp of – credit default swaps, hedge funds, toxic assets – and as such quickly descends into what, for many, will be a head scratching sequence of Machiavellian machinations. The only time the film truly comes alive is when Douglas is on screen. Sadly, he’s absent for the bulk of the first hour. Lucky for us then there’s another hour and fifteen minutes yet to come…yeah. Um, lucky. Douglas has been relegated to a supporting role in what is really Shia LaBeouf’s movie. The film revolves around his rivalry with titan-of-industry and Forbes-Magazine-made-flesh Bretton James (Josh Brolin). While I do think LaBeouf can be likable on screen his lack of believability as financial whiz kid really hampers the film.

Director Oliver Stone (who also helmed the original Wall Street) has created a meandering film. While it might only be 12-minutes longer than its predecessor, it feels like more. The film is in dire need of editing. Scenes linger for much longer than they need to and plot points seem all but forgotten until they serve the story 40-minutes later. Gekko’s motivations are always murky but it feels less like an artistic decision and more like different drafts of the script caught in a tug-of-war. Stone makes repeated usage of themes such as bubbles, dice and dominos; it’s some of the most embarrassingly obvious usage of visual metaphor since Martin Scorsese’s rat in The Departed. All these years later, Douglas is still fun to watch in what has become his career defining role. And there are scenes that crackle. But in the end it’s not quite enough. Money, as the movie’s title tells us, might never sleep…but you might.