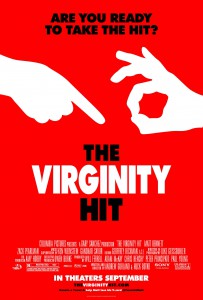 If you ever watched a Judd Apatow film (Superbad, Knocked Up, The 40 Year Old Virgin) and thought how much you’d enjoy it if it weren’t for all that pesky wit and charm, then have I got a movie for you. The Virginity Hit follows the exploits of a group of high school seniors led by Matt Bennett and Zack Pearlman playing characters of the same name. Zack is a would-be filmmaker, which isn’t as much of a character trait as it is a plot device to justify why the film is a collection of YouTube clips, camera phone recordings and flip camera video. He is determined to capture his adopted brother Matt’s quest to lose his virginity to longtime girlfriend Nicole Weaver. When Matt and Zack discover that Nicole has had a dalliance with a college boy at a frat party the two devise a plan wherein Matt and Nicole will proceed with deflowering each other and then, upon completion, he will immediately break up with her. And if that plan isn’t distasteful enough for you, Zack, the aspiring auteur that he is, will record everything. Oh, and a group of their friends will listen in from an adjoining room.

Matt attempts to achieve the geek charm of Saturday Night Live’s Andy Samberg, while Zack wants to be Jonah Hill so bad he can taste it. Neither succeeds nor comes close. They speak in the cadence of jokes but there’s relatively few punchlines (or at least few that actually work).

Virginity losing quests are a frequent theme in films. As a friend of mine pointed out, they seem to run on 4-5 year cycles; most likely because it’s a new story to each generation of teenagers. And while the exuberance of youth often times leads to bad decisions, filmmakers typically find a way to imbue their characters with a certain level of pathos; some unspoken way to prevent the viewer from mistaking hormonal eagerness for sexual pathology. However, there is none of that here. The preponderance of failed jokes combined with the crass actions of the main characters makes for a dreary film going experience. There is, after all, very little comedy to be found in the hijinks of a group of serial rapists. Instead, what we get are the unfunny, mean-spirited antics of the Ghost of Registered-Sex-Offenders Yet To Come. Late in the film they attempt to turn the tables on the protagonists, but by then it’s too little/too late…even if it were done effectively…which it is not.