Hello all, sorry I haven’t written anything in quite a bit. Life’s been a bit hectic and…yeah.

From around St. Louis sports:

The Cardinals have all but been eliminated from the post-season. As we sit here, the magic number for elimination is two, meaning any combination of Cardinals losses/Reds Wins equaling two will eliminate them. I am, however, happy to say that I finally got to go to a Cardinals game that resulted in a victory, as I went last Friday when the Cardinals defeated the Padres 14-4.

Backup catcher Jason LaRue was forced to retire as a result of the concussion he received in the melee in Cincinnati. Johnny Cueto was last seen running in terror screaming like a small child. As he should, as nothing can escape the wrath of the mustache. 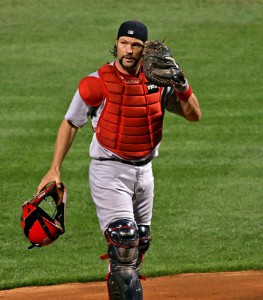 It hears your footsteps, Cueto.

The Tigers are off to a 4-0 start, although they had quite a bit of a scare against San Diego State. Blaine Gabbert has gotten off to a solid if unspectacular start, completing 68.2% of his passes for 1039 yards, 5TD and 3INT. At tailback, with the dismissal of Derrick Washington , Henry Josey (26 carries for 212 yards and 4TD), De’Vion Moore (31 carries for 183 yards and 3TD), and Kendial Lawrence (16 carries for 112 yards and 1TD) have handled the bulk of the carries. Aldon Smith has picked up right where he left off last year, gathering three sacks in three games before injuring his leg.

The real breakout of the year, however, has been receiver T.J. Moe. Moe doesn’t have the breakout speed of past receivers like Jeremy Maclin or Danario Alexander, but he has terrific hands, a huge vertical, and has become one of the nations leading receivers, with 37 catches for 394 yards and two touchdowns.

I will be covering the Rams in a separate post, as there’s too much for me to write about. I simply wanted to put up a quick post about the Cardinals and Tigers.

Finally, a big congratulations to the River City Rascals for winning the Frontier League Title. After falling behind two games to none to the Southern Illinois Miners, the Rascals swept the next three games and defeated the Traverse City Beach Bums in the finals 3 games to 1. Stephen Holdren earned a spot on the All Frontier League team for his campaign after hitting .305 with 16 HR and 72 RBI. I think it was due to my excellent coverage and report on the Rascals games that they were able to win the title.