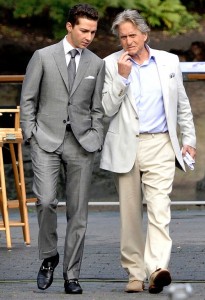 We are finally getting a trailer for the long talked about sequel to Oliver Stone’s Wall Street. The trailer primarily focuses on Michael Douglas’ character from the original film, Gordon Gekko. I’m a little baffled at the trailer to be honest. Teaser trailers are marketing tools to hype up the release of a movie. It seems they are relying to heavily on promoting as a sequel to a film that is over 20 years old. When it comes to films, people’s memories are not that long (unless you happen to be as big of a geek as me). They have little chance of getting people in the 15-25 age group to pay money to see this if all the ads and trailers follow Gordon Gekko. I would have thought that Shia Lebeouf would have been pushed more to the forefront in the advertising since, at this moment he is a much more bankable star than Michael Douglas. I’ll wait for the full trailer to see if they change their marketing plan a bit.

Back in action again following a long prison term, Gordon Gekko (Michael Douglas) finds himself on the outside looking in at a world he once commanded. Ostensibly hoping to repair his broken relationship with his daughter, Gekko forges an alliance with her fiance, Jacob (Shia LaBeouf) . Though Jacob comes to view Gekko as a father figure, he learns the hard way that Gekko is still a master manipulator who will stop at nothing to achieve his goals.