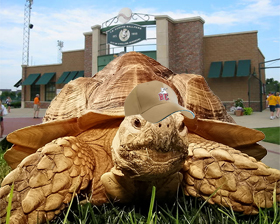 Join ReviewSTL and our friends from Petropolis at the River City Rascals baseball game tonight for the Petropolis Playoff Push!

The River City Rascals and Petropolis Pet Center have teamed up for this Sunday, August 9th to continue a pet supply donation drive for the St. Charles County Humane Society, and all of the pit bulls that were recently rescued from the fight ring.

ReviewSTL will have a booth at the game, and will be giving out great movie prizes, such as t-shirts, hats, posters, and other great give-aways! We hope that you can make it out to the ballpark, support a great cause, and score some free stuff!

During this Sunday’s Rascals home game starting at 6:01pm at T.R. Hughes Ballpark, fans that bring any donation items will receive a coupon good for $3.00 off of a box seat to that nights game. Petropolis will also be holding a Nintendo Wii home run competition for a $2.00 donation to the cause. Prizes include tickets to a St. Louis Cardinals game, a week of boarding at Petropolis, and Rascals giveaways.

Fans are allowed to bring their dogs this Sunday and every Sunday to T.R. Hughes Ballpark. We hope to see you tonight!

Click here to purchase tickets for tonight’s game, and for more information on the River City Rascals