Viral Video of the Day: “Crysis Roll’d” Rick Astley’s “Never Gonna to Give You Up” Vs. Video Game “Crysis” 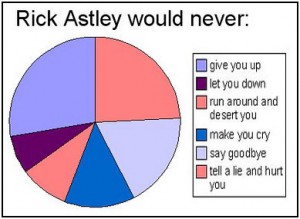 This video will hold no weight if you’ve never been Rick Roll’d.  The infamous “Rick Roll” comes from a famous internet image board (of which the first rule states I cannot talk about). It started as a prank where someone would like to something, and when clicked it would instead lead to this. Very soon it became popular all over the internet, and for a few months I hovered over every link to make sure it did not contain the URL which would lead me to the video. The fame of it became so much that is seemingly resurrected singer Rick Astley’s career. It was so big a couple years ago that Astley himself Rick Roll’d the Macy’s Thanksgiving Day Parade.

Now the song has morphed itself with another internet phenomenon, Crysis, a videogame with graphics so good that the internet meme about computers came up; “Yeah, but can it run Crysis?” Using in game developer tools someone combined the top notch graphics, and addicting 80s love song. Let us know what you think in the comments below!