Videogame Review: ‘We Happy Few’ Out Now on PC, PS4 and Xbox One! 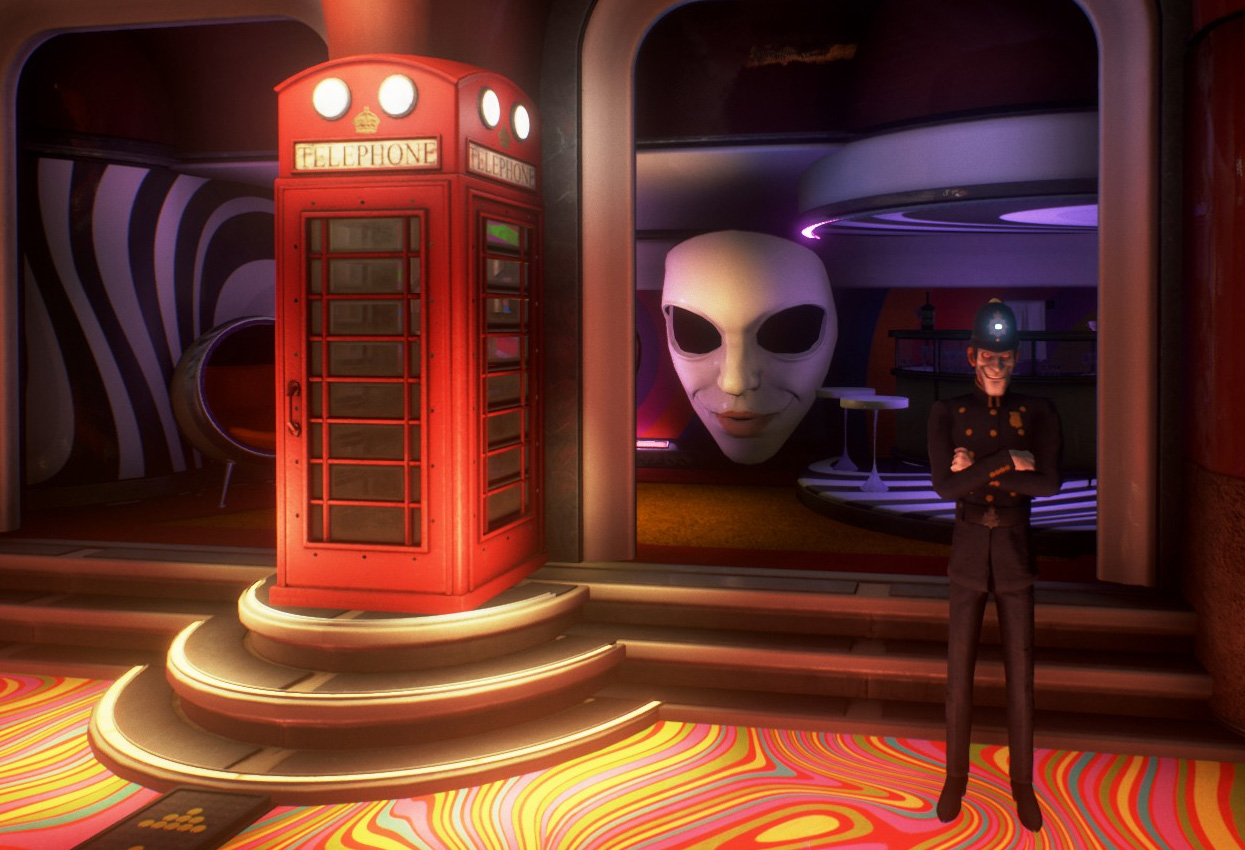 A game of paranoia and survival, in a drugged-out, dystopian English city in 1964.

That is how Compulsion Games, the developer of We Happy Few, describes their latest game on their website. To put it in even more relatable terms, imagine a cross between Borderlands, Bioshock, A Clockwork Orange – and one of many survival games like Rust. I can see influences from all of them, some of my favorite properties out there, in this action-packed cautionary tale. 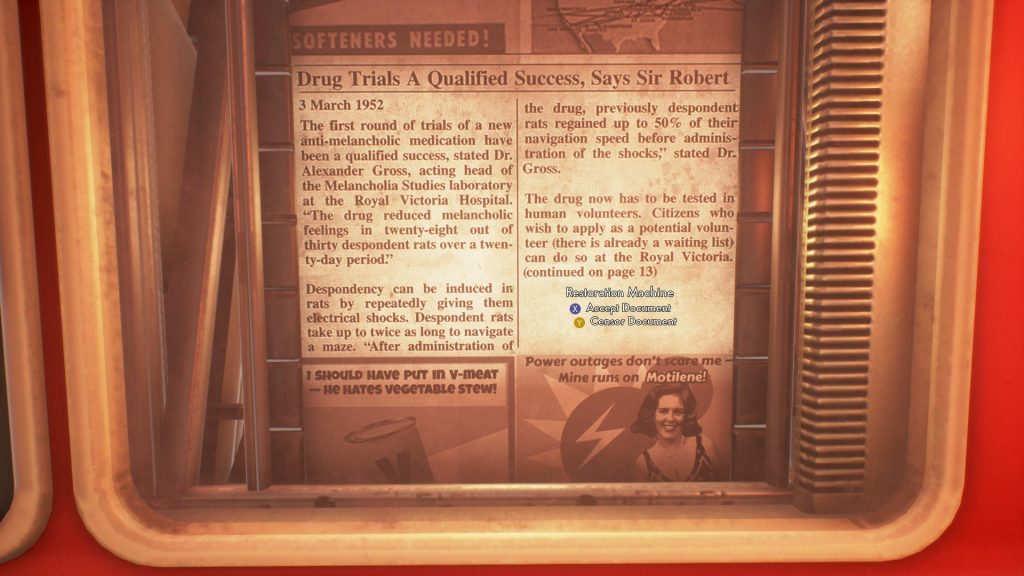 In the game you start off as Arthur Hastings, one of three playable characters whose stories are all interwoven. Arthur works as a censor for the Wellington Wells newspaper, removing articles from their archives that are deemed offensive or counter-productive to the government’s ideology. Everyone in town takes a medication called, “Joy,” which keeps them all in a constant state of happiness. Arthur decides to stop taking his medicine, and realizes that a co-worker went missing who had also stopped taking her Joy. He eventually realizes just how much is being hidden from them, and starts to remember what happened to get them to this place. It is up to you to help him regain his memories, and navigate this alternate post-WWII version of Britain.

You also play as Sally Boyle, a chemist who has worked on Joy, and Ollie Starkey – a military man who knew Arthur before the war. 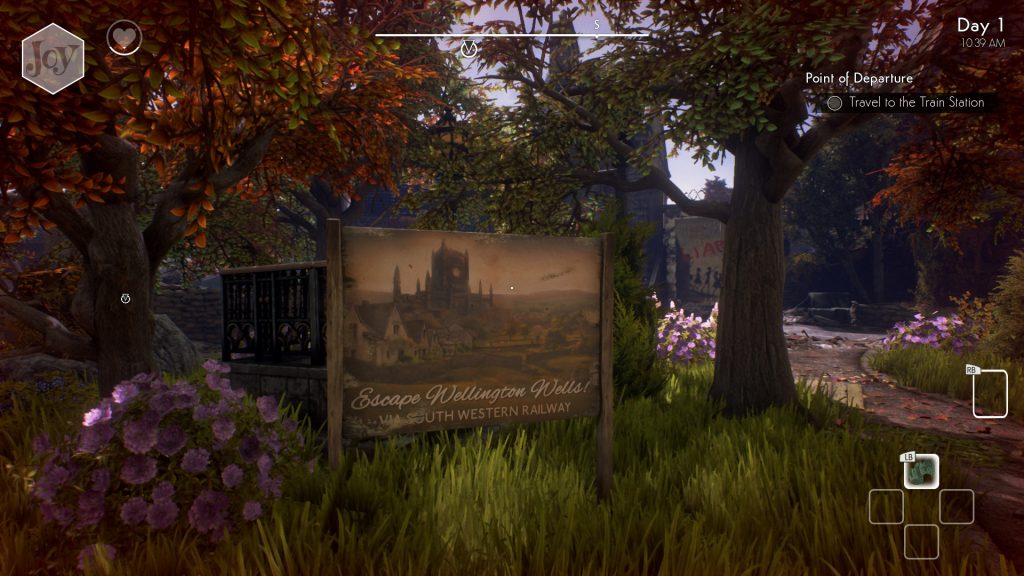 We Happy Few is played from the first-person perspective, like many of the aforementioned games.

The art direction of We Happy Few is absolutely gorgeous. The style is very unique, but certainly draws inspiration from the detailed post-apocalyptic world of Borderlands, as well as the Bioshock games (especially Bioshock Infinite, with all the bright and beautiful colors). The style for the era is also very reminiscent of the 1971 Stanley Kubrick film, A Clockwork Orange. At one point in the game, after Arthur crosses a bridge into another town, the music even sounds like the haunting Wendy Carlos film score – a great homage.

The graphics are not hyper-realistic, yet they are incredibly detailed. The game definitely does not look too cartoonish, and it isn’t cell-shaded like Borderlands. The stunning visuals are unique, and were hard for me to take my eyes off of. I found myself just walking around at times and taking in the beautiful yet decaying world that Compulsion Games has created for the game. Again, I think Infinite is probably the closest thing I could compare it to (one of my favorite games of all time). 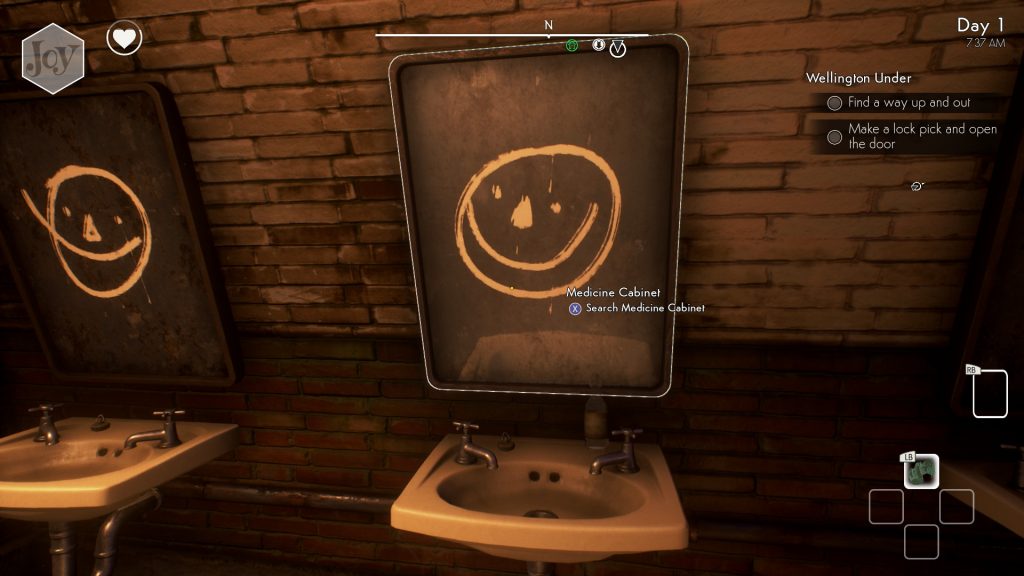 The default controls were very intuitive, and I didn’t find the need to change any of the standard settings. I used an Xbox One controller for the majority of my game. The only thing I had to tweak was the look sensitivity, as the x and y axis weren’t quite as responsive as I’d like. Once I cranked them up, I was good to go.

If you are used to first person games – shooters, or especially survival games like ARK or Conan: Exiles – you’ll be able to pick this one up and run with it. It has all the basic mechanics, an easy to access menu for inventory management and crafting, and you can use the d-pad for hot-swapping  your different items. They are separated into categories, and you simply click the direction of the items multiple times to scroll through. 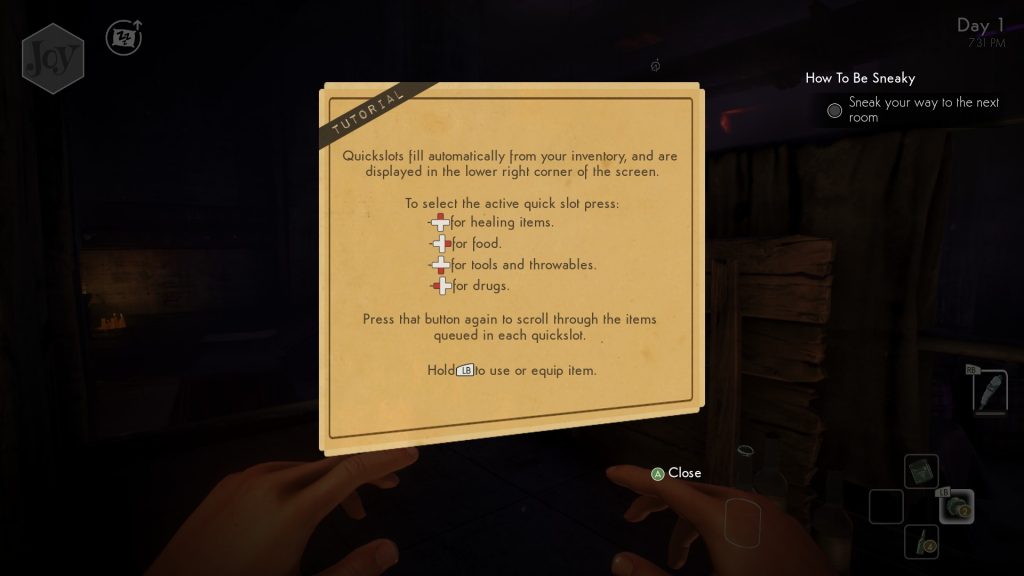 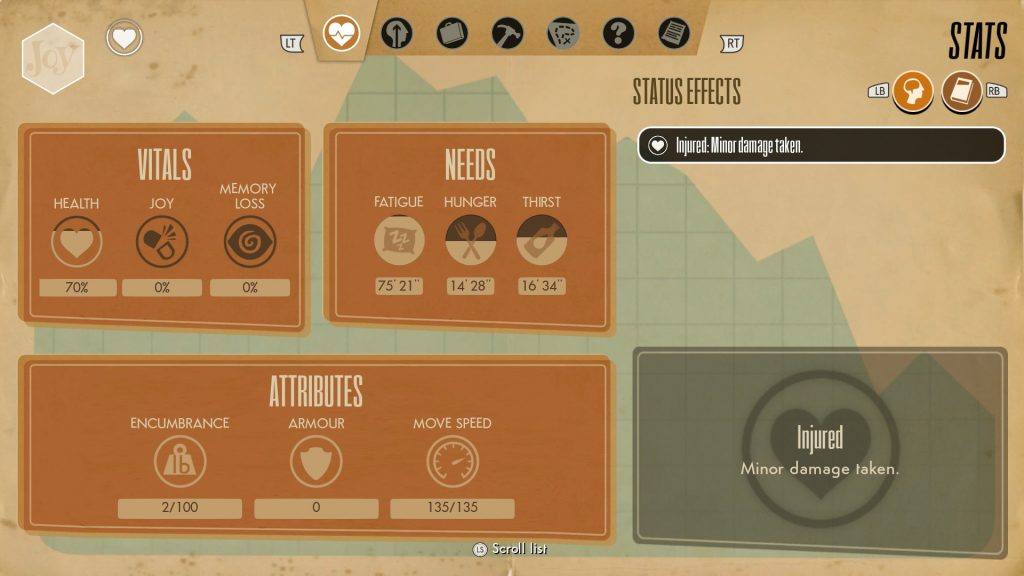 Aside from the thrilling story and adventure you go on to learn the truth about what happened to Wellington Wells, there is also a strong survival element built into the game.

It is important to collect food items, water, bandages, med kits, and other items to keep your character in good health. By finding different plants and items, you can also craft healing creams and other items that are necessary to survive. You can eat rotten food and use dirty bandages to keep you alive – but be careful, as there will be consequences. Sleeping in beds located all around town will keep you rested, offers some healing, and will also pass the time (some missions require a certain time of day).

The combat in the game revolves around brute strength. You start off punching, and things come to fisticuffs during an early mission. You eventually find items like sticks, bats, bayonets, etc. that will aid you in your combat. But there are no guns – not any that fire bullets, anyway. This gives the player an extra challenge, relying more on blocking and swinging at the correct time – or even better yet, relying on stealth whenever possible. 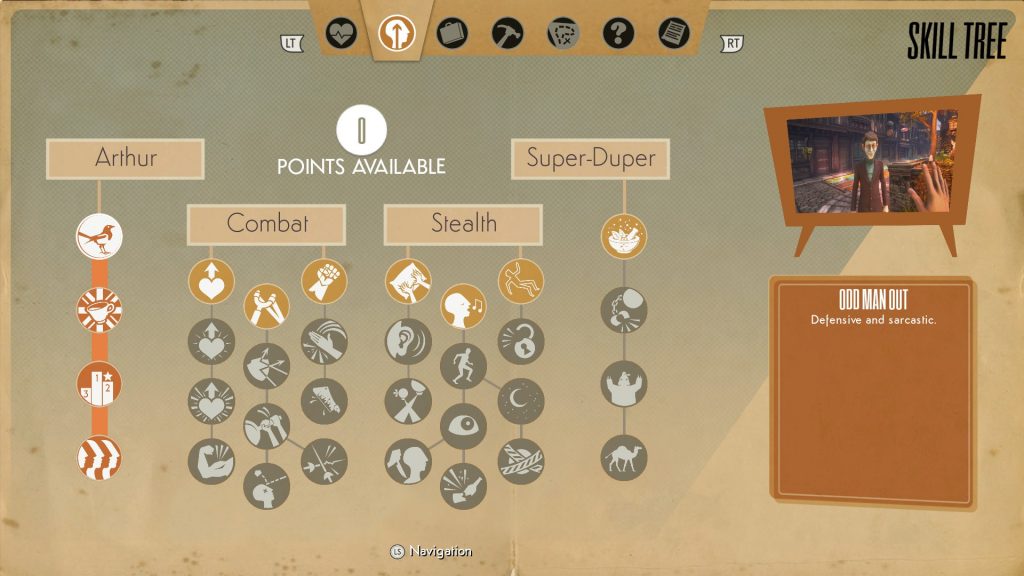 Speaking of skills, there is a basic skill tree that allows you to unlock different branches as you complete missions and earn points. As in most games, there are skills that improve health, endurance, sneakiness, and very important for this game – skills that allow you to be more persuasive when interacting with people.

As I mentioned early, stealth is a wise choice throughout the game. The people who enforce the laws are always on alert, and the townspeople who have managed to escape the government are very skeptical of outsiders. Your best bet is to blend in, stay quiet, and keep to yourself.

A unique mechanic to this game is how you have to balance using Joy to remain undetected, while limiting your skills. You risk being noticed while off the drug, so it created a fun juggling act as you try and make your way through hostile areas. 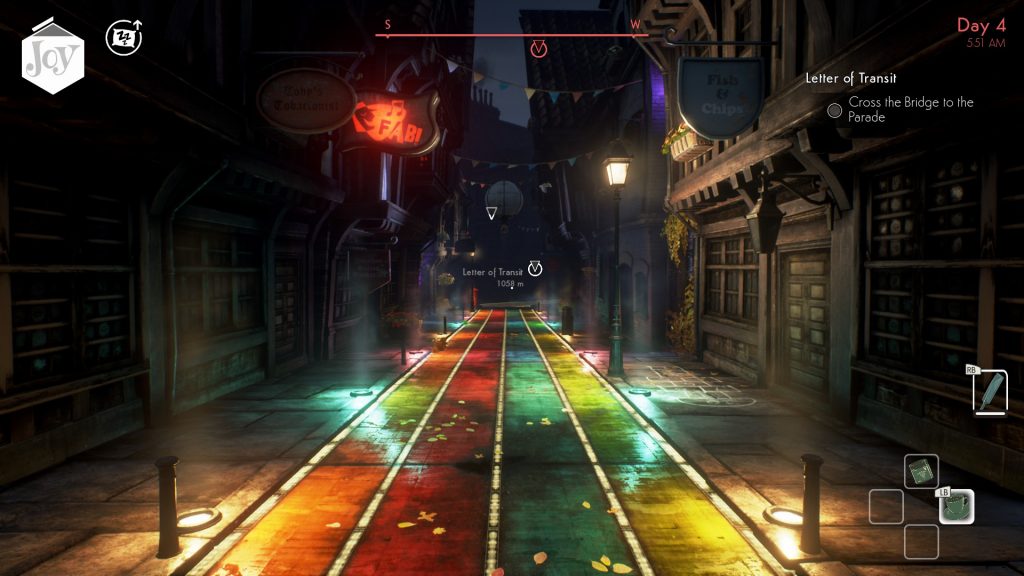 We Happy Few has been in development for several years, and was released in early access on PC in 2016 (in sandbox mode only). Meanwhile, Compulsion Games has been taking their time to create a great story which also serves as a cautionary tale. I love the idea of telling the story through multiple characters, and playing a game that wants to talk about real issues that affect all of us today. The subjects of prescription drugs, government control, censorship, and denial are all prevalent throughout the game.

Stealth and Survival are two of my favorite genres, and this game perfectly combines both of these elements. Staying undetected while keeping your vitals up makes for a fun and exciting challenge while exploring this beautiful nightmare of an alternate reality. It’s also one of the most compelling stories I have played through in a game for quite some time, and kept me riveted the entire time.

Good things come to those who wait, and We Happy Few is no exception to that rule. 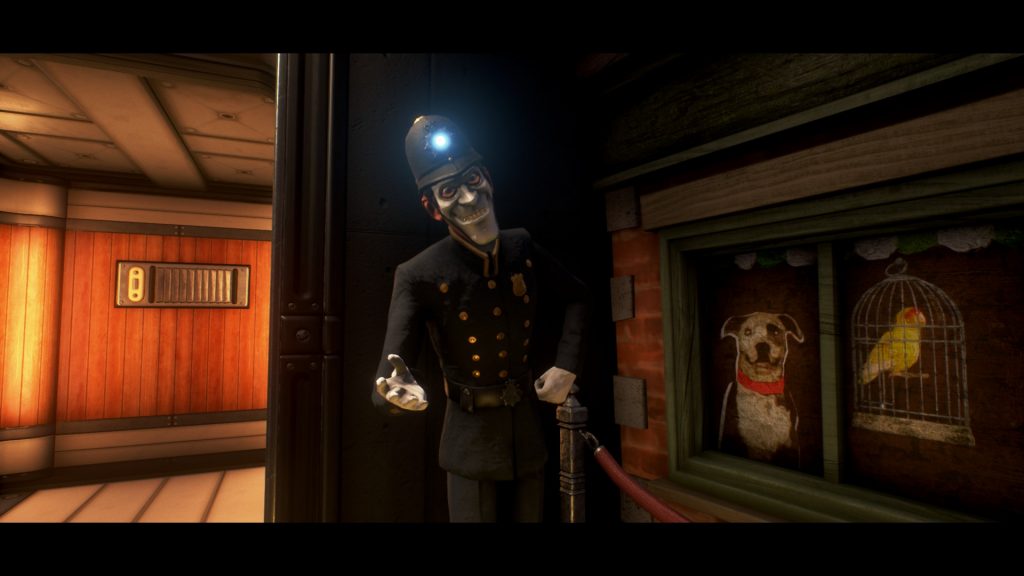