Gen Con 2018: A Weekend in Review (Plus Cosplay Photo Gallery) 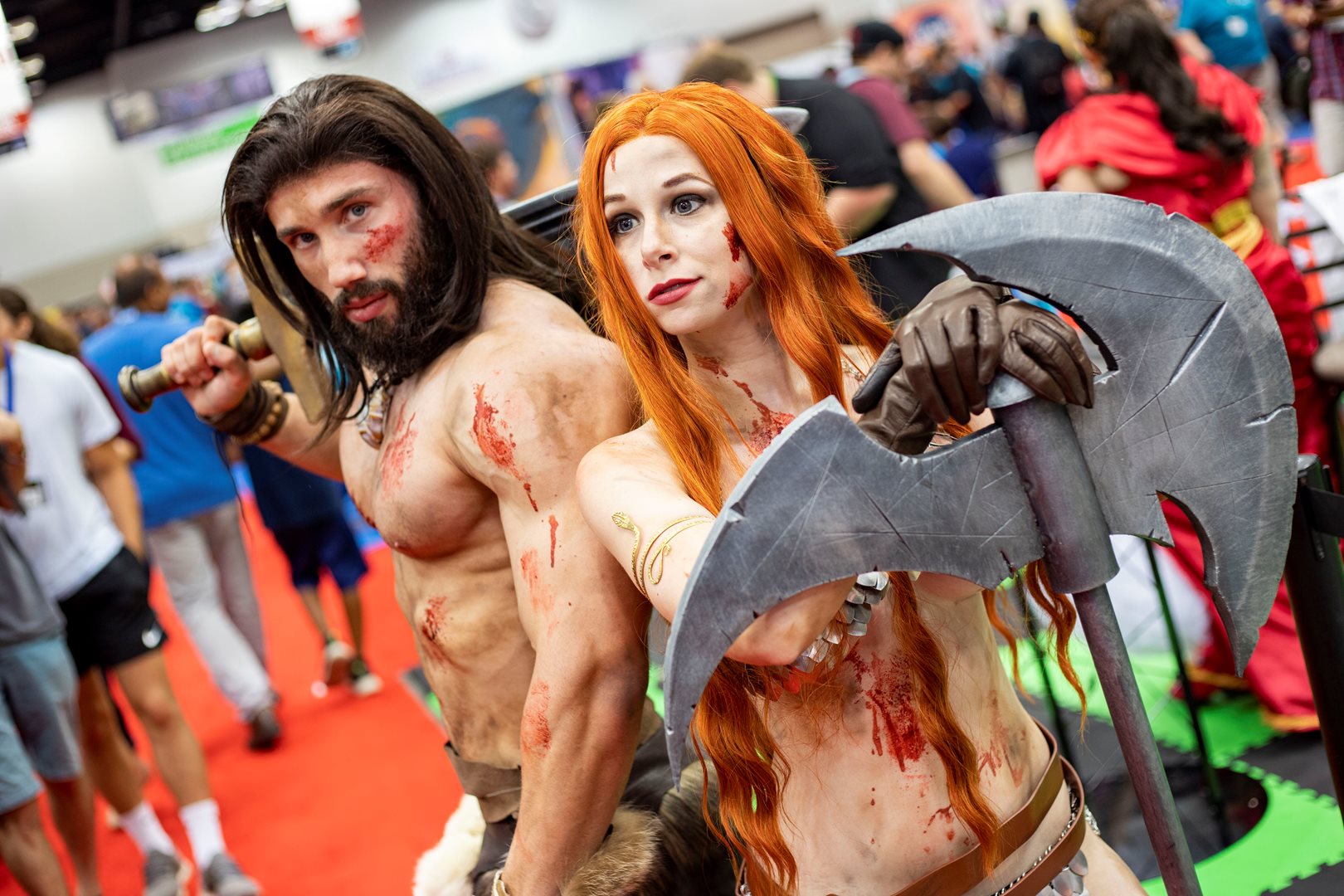 Gen Con… oh, sweet Gen Con. This is a big one, folks. I have wanted to experience Gen Con ever since I knew what cons were, and it certainly did not disappoint! For those of you that don’t know, it is the BIGGEST tabletop gaming convention of the year. In recent years, video games have also found their way into the fray. Plenty of tabletop games like Magic: the Gathering, Ticket to Ride, and Star Realms have their own video and mobile games to accompany the physical versions. We never got a chance to try it, but there was a whole room dedicated to the Star Trek Bridge Simulator! To be honest, Gen Con had so much to see that it would be impossible for any one person to experience everything.

My St. Louis crew, consisting of Dan Caliguiri, James Reese, and Dylan Travis, each had our own reasons for being there. The one we all shared though, was Magic: the Gathering. This year is the 25th anniversary of the most popular trading card game, and you could absolutely tell by the way things were set up. Almost a quarter of the massive gaming hall was dedicated to Magic players. We took part in a couple of events, but I’ll get to that later.

In addition to this being my first Gen Con (it was the first for the rest of my crew as well), it was also the first time I attempted to do two big cons in a row. The weekend prior, I was down in Raleigh, NC for Supercon. Since last year, Supercon nearly doubled in size and saw a massive increase in attendees. Not to mention, Raleigh is basically an outdoor sauna so it felt like I really did spend a weekend in the wasteland. I only had two days at home in St. Louis before leaving for Gen Con to get the party started on Wednesday night.

We arrived in Indianapolis shortly before midnight on Wednesday. Dan secured us a pretty amazing AirBnB that was basically a 3-bedroom, 2-bathroom house. Learning a very valuable lesson from previous cons, we decided it was absolutely necessary to go shopping for breakfast foods and snacks we could eat over the course of the weekend. One late-night trip to a grocery store later, we each ended up going to bed well after 2 a.m. This would pretty much set the trend for the rest of the weekend.

Thursday morning started relatively late, with us arriving at the convention center around 11a.m. We were immediately greeted by a large crowd, and an absolutely MASSIVE line for Will Call to pick up badges and tickets. While Dan and I were able to go to the Press Room to pick up our badges, unfortunately James and Dylan had to brave the line that weaved through the entire lobby and even out the west entrance of the convention center.

We didn’t spend much time in the Press Room, but it definitely set a good example for how the weekend would go… which was that this experience would be unlike any con I’ve ever been to. They had a whole bunch of games for the press to demo, as well as a few ones to take for free! I picked up a copy of the game Shit Happens, specifically the “50 Shades of Shit” version. I’ve only played it once, but I remember having a really good time with it. It’s in the same vein as Cards Against Humanity, so definitely not a family game!

I started my exploration in the gaming hall. I was immediately greeted by the sight of Blizzard’s massive booth and hundreds of tables running various tabletop war games, board games, and card games. I briefly visited a few areas, making sure to stop by the table running a game of Fallout: Wasteland Warfare. I wanted to get in on one of the games, but they had all sold out shortly before my press credentials were approved. I wasn’t too disappointed, because seeing the beautiful terrain set up to represent Vault 13 was incredible. I know that my games will probably never have anything that elaborate, but it’s always good to dream!

Dan and I met up around the Magic area and proceeded to look through the extensive GenCon program guide as well as the large coupon book for deals in the exhibitor hall. We were briefly distracted by the gaming area set up around Slugfest Games, the creators of the popular party game Red Dragon Inn. The game has players taking up personas based on classic fantasy character archetypes, all engaged in a drinking game at a local bar called the Red Dragon Inn. Players are eliminated as they either pass out drunk or get ejected from the bar for running out of money before paying their tab. Dan has many of the expansions to the game, allowing our games for a huge selection of characters to pick from. We were delighted to see new additions to the game as well as receive promotional cards from the guys running the booth! The “Prize” card adds a new element to the game’s gambling rounds, providing additional benefits to winning the pot.

Our journey continued into the exhibitor hall… which absolutely blew us away. It was 30 rows of pure nerdy awesomeness. We were immediately struck by hand-made goods, card dealers, new game demos, and enough dice to fill our entire car! My first stop was at the Critical Role booth. James hadn’t caught up to us yet, but I couldn’t resist visiting their store to purchase some of their new merchandise. Critical Role played a huge part of Gen Con, as all the fans (known as “critters”) flocked to celebrate their shared love of the show as well as attend the live recording of the week’s episode. Unfortunately, James and I weren’t able to get tickets for the live show before they sold out. Pretty much all of the Critical Role events were sold out for months before the convention. So James and I both paid a visit to the CR shop to buy some of the merchandise since we weren’t going to be able to get any of the live show exclusive stuff.

Dan and I walked through the tail end of the exhibition hall, checking out the demos for games like Star Realms, Fallout: Wasteland Warfare, and a hilariously horrible board game based on the characters from the web comic Looking for Group called Orphans and Ashes. You play the characters from the comic as they try to rescue children from an orphanage that’s burning down. Dan and Dylan sat down for a playtest while I took some photos of the game as well as some passing cosplayers. They had such a fun time with the game that we were all tempted to buy it. The only thing stopping me was the fact that I was almost completely unfamiliar with the comic so I felt like I’d have to read it to understand all the references. If I ever get around to it someday though, Orphans and Ashes will definitely make its way onto my game shelf.

After walking a few more aisles of the exhibitor hall, hunger seemed to strike us all simultaneously. Dylan had to leave us for a Magic even he’d signed up for, but the rest of us ventured out into downtown Indianapolis for some grub. Dan found us a really nice little Italian café called Fresco a few blocks away. The trip there was a bit rough, me being a bald guy carrying a bunch of camera gear, but we got to enjoy a nice stroll along the beautiful canal that cut through Indianapolis. The restaurant was right on the canal too, which made me wonder where a Lyft would have dropped us off if we decided not to walk there! One delicious sandwich and a refreshing Italian ice beverage later, we were on our way back to finish the day at the convention center.

Dan left us to register for the Magic 25th anniversary birthday draft, which was their biggest event of the weekend. I’ll let you read his recap for all the details on that, because I didn’t stick around long enough to spectate. Knowing we would try to enter some events over the course of the weekend, James and I decided it would be a good time to get some generic tickets. These were basically money vouchers that could be used to get into any event that had available spots. Unfortunately by the time we tried to get them, there was only one table still selling so we had to wait in a good 45 minute long line due to some technical issues with their printers. But alas, we persisted and got our tickets!

Since the exhibitor hall had already closed, we decided to check out some of the rooms hosted by game developers. We visited Czech Games Edition (CGE) and Rio Grande Games, both of which were still running demos of their games. The coupon book told us that CGE was giving out promo cards for some of their games, so I decided to pick up a pack for Codenames, the only game of theirs that I own. While looking through the room, I spotted demos for a game that sparked my interest. Adrenaline is marketed as a first-person shooter in tabletop format. This really caught my attention because that’s how I’m building the game that I’ve been developing for the past four years. I didn’t get a chance to play test Adrenaline, but I will definitely be looking more into it pretty soon!

We stopped in the Rio Grande Games room because James and I are both big fans of their deck building game Dominion. We have a couple expansions to the game, but have always had a hard time with the limitation of four players. Our average game nights usually consist of five or more players, so we are often limited in our selection. There are some expansions to Dominion that come with the cards we need to expand it to five or six players, but so far those expansions have eluded us. When we asked one of their game experts about it, he told us everything we needed to know and even hooked us up with some promo cards for the game! It was a very welcome surprise, as some of these cards add some very interesting and unique elements to the game.

Shortly after, we decided to head back to the AirBnB while Dan finished his run through the Magic birthday draft event. Dan kept us updated on his progress, playing well past midnight into Friday morning. Dylan, James, and I discovered in the GenCon program guide that a whole bunch of artists who have done work for Magic were at the con, so we dug through our cards for a few we’d like to get signed. We all ended up going to bed before Dan made it back, and we heard all about his draft the next morning.