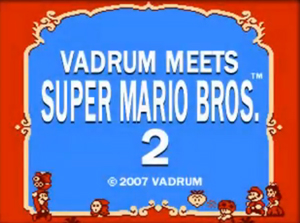 Check out the second encounter that the incredibly talented Italian drummer, Andrea Vadrucci, has with Super Mario Brothers. This time he plays along with the music from the second game. Once again, this is one of the coolest Super Mario Brothers music covers ever. Vadrucci is an amazing drummer. Enjoy the video!

Hi Guys! This is my SUPER drum medley of the “Super Mario Bros 2” theme by Koji Kondo. Thanks everyone for the awesome support, I have no words…You’re the best! ^_^
Check out this and other drum videos at http://www.andreavadrucci.com – http://www.myspace.com/vadrum