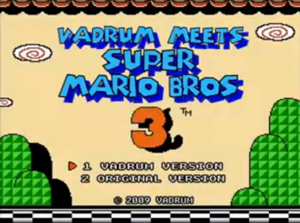 Check out the other “Vadrum Meets Super Mario Bros” Videos

Hi my friends, I’m back with a new video! This is my SUPER drum medley of the “Super Mario Bros 3” theme by Koji Kondo.
As always, THANKS EVERYONE for the awesome support, have fun and…happy new year! ^_^
Check out this and other drum videos at http://www.andreavadrucci.com – http://www.myspace.com/vadrum