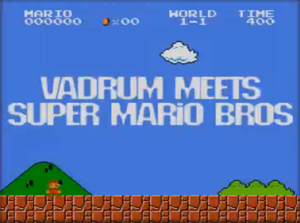 Check out the first encounter that the incredibly talented Italian drummer, Andrea Vadrucci, has with Super Mario Brothers. This is one of the coolest Super Mario Brothers music covers that I have ever heard. And I have to say that AV is one hell of a talented drummer!

This is my SUPER drum version of the “Super Mario Bros” theme by Koji Kondo. Check out this and other drum videos at http://www.andreavadrucci.com – http://www.myspace.com/vadrum