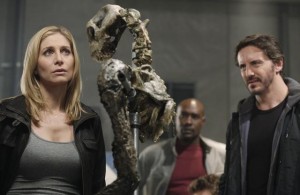 The episode begins with the world in chaos over what exactly is the red sky.  No one from Earth has the answer and this leaves Erica with wanting answers.  The captains of the 29 ships doubt that Anna is still in control.  Due to the release of red sky, they believe that she is starting to have human emotions.  Anna assures them that there is no need to panic, and just to be sure they get the point, she makes an example of one of the captains by brutally attacking him.

Anna banishes Ryan for wanting to free his daughter from the chamber that Anna has sealed her in.  Anna stills has some tests she wants to perform, and she hopes to use Ryan to destroy the Fifth Column from within.  In the meantime, Erica uses her son Tyler to gain access to the mothership.  She needs to ask Anna some questions regarding what exactly red sky is.

Anna answers these questions by releasing a message to the world telling all of humanity that red sky is meant to help everyone.  It will restore the Earth back to what it was before the humans damaged it so badly.  She then assures the people that they come in peace and will not betray them.  After the message, Erica leaves, but not before Lisa tells Erica to search for a Dr. Watts.

Erica finds Dr. Watts’ assistant, Sidney, who is actually who the V have actually been watching.  Sidney reveals that he had discovered a V skeleton years ago and has been experimenting on it to learn all he can.  We learn that a compound in red sky is also found in red sky, a form of phosporous.  The same type that V need to reproduce.  Erica remembers she was diagnosed with high levels of phosporous when Tyler was born.  Was she experimented on years ago by the V as a test subject? 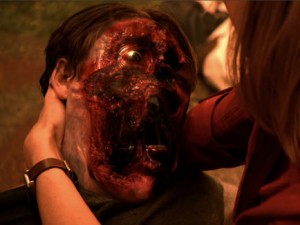 The episode ends with Anna killing the deformed survivors of the ggs she created in season 1.  She then transports herself to some sort of cave where a woman emerges.  Anna addresses the woman saying “Hello, mother”.

Let me first say that this was the first time I have ever watched an episode of V.  I was surprised at how easy it was to pick up.  Yeah, I have no idea what kind of relationships these people have had or what their past are, but the story was easy to follow.  With that said, I got what I was expecting.  I didn’t think it would be great just slightly entertainining.

I will say that I was impressed with some of the special effects.  But only some.  There is a scene in the opening of the episode in which Tyler’s face begins to decompose in his mother’s arms.  It was pretty well done and sufficiently creepy.  Also, the sequence where Anna attacks one of her own were pretty cool.  The skin being shredded to reveal the lizard underneath was a nice effect.

Overall, I was unimpressed with the acting.  Especially from Erica.  Is it just me or does she walk kind of awkwardly?  And the dialogue is as much to blame as the acting.  The actors were delivering some awkward one liners that just kind of slowed things down.

Overall though not bad.  It set up a nice story for the rest of the season to continue.  But it still makes no sense to me that a doctor who made what could be the greatest scientific discovery, in finding an alien skeleton, would not reveal it to anyone.  Until next week…

What did you think of the episode?  Better or worse than most os season 1?