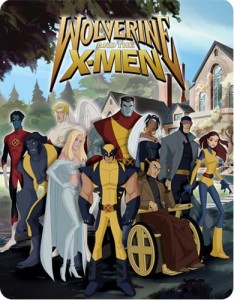 I remember watching the trailer for the new television cartoon Wolverine and the X-Men on youtube several years ago.  My first thought was that the action looked awesome.  Then, I thought about X-Men: Evolution which wasn’t terrible, but it missed the mark on a potentially great concept.  I was worried that the new show would only focus on hitting the audiences with as many mutants as possible with the focus on the action, not the story.

I soon learned that the show would be airing on the Nicktoons Network, a digital channel that my tv did not get.  I was extremely disappointed.  I remember reading positive reviews about the show, and some people called it just as good as the original X-Men: The Animated Series.  About a year later, I found the first three episodes on DVD.  I absolutely loved it.  I thought the artwork was great.  The voice acting was pitch perfect, and the characterizations were a blend of the classic concepts of the characters with some new touches.  The action was terrific as was expected.  I had to see more.  Unfortunately, Marvel Animation was only releasing single DVDs with an average of 4 episodes a disc.  I didn’t want to shell out the money for each disc individually.

Fortunately for all of us, in mid-October the complete series was released.  I have slowly been watching the series with my brother since I got it finishing it last night.  I am only left thinking what the title of this article says: Wolverine and the X-Men is the best animated X-Men show available.  And I love the original series.  I have all five volumes that make up the original.  So what makes this series so great?

After a musterious explosion at the Xavier mansion, and the resulting disappearances of Professor Xavier and Jean Grey, the distraught X-Men disband.  But soon Wolverine, Storm, Beast, and the others must join together again to not only battle the increasingly powerful Mutant Response Division, but also to prevent a catastrophic future that Xavier has warned Wolverine must never come to pass.  With help from their allies, the heroic X-Men wage war against formidable foes as the present and future collide.  But who will win? 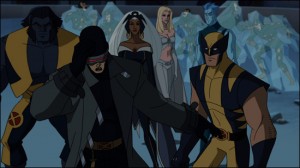 I really didn’t think the story would work.  I wasn’t sure how they would balance Xavier in the future talking to Wolverine while he was unconscious.  While most of the episodes are set in the present, there are a couple set in the apocalyptic future.  It’s cool to see Xavier teaming up with new mutants to battle the rise of the sentinels.  The story kept a solid focus throughout the season.  There were some side storylines, but overall it was about stopping the future from happening and trying to find Jean Grey.  It was fun to see how the writers creatively weave as many mutants in as they did.

As I said, the characterizations are perfect.  You get to see all of your favorite mutants from Nightcrawler to Gambit to Scarlett Witch to Domino.  They brought in a lot of mutants that have received little focus from either the movies or other tv shows.  The voice acting was perfect for each character.  I was particularly impressed with Quicksilver and Cyclops.  It was also nice to see Cyclops as not the boy scout we are used to.

The action is really the focal point in the show which is certainly not a bad thing.  We get to see some pretty unique fights with each mutant using there special powers.  I particularly liked watching Shadowcat take out a Sentinel on her own and Magneto’s first encounter with Wolverine and his newly formed team.  These fight sequences will get you excited to see what each new episode will bring.

I can’t praise this series enough.  I really enjoyed it much more than I thought I would.  The only drawback is that the series concludes with what could have been an outstanding season 2.  Marvel Animation had some disagreements with their financing partner so season 2 was subsequently cancelled.  It really is true that all of the best shows get cancelled.