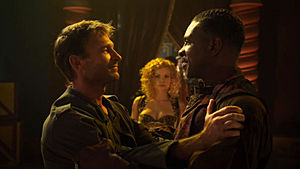 The episode opens with a young man being examined in a foreign prison.  The warden tells him that he won’t escape out of this one like he did the others.  The man smiles.  The guards put him in a cell.  Moments later the alarm sounds.  The guards rush to the cell to find one guard dead and the prisoner’s straight jacket.  The word “Kozmo” is written on the wall in blood.

Faraday goes back to the train yet wear he was framed to find clues.  He remembers the last name of one of the officers who captured him so he goes to ask him some questions.  The man refuses to talk even though Cape is threatening his life.  Cape drops him over the bridge, but the man lands on a truck and does not die.  Orwell becomes to question Cape’s techniques since Ark was almost able to trach her down since he waited so long with officer.

A new visitor shows up at the circus to visit Max.  It is Gregor, the escaped convict from the opening.  He calls Max Kozmo when he sees them.  Gregor is an old magician friend.  Gregor tells Max that he will leave once he gets back what was once his, the cape.  Max tells him he no longer has it.  After Gregor leaves, Max tells Faraday about the legend of Kozmo.  He is a moniker for a theif, murderer, escape artist that has been passed along through the ages.  Gregor would have been the next Kozmo, but Max saw him unfit and dangerous so he took the cape from him.

Faraday follows Gregor out the next night.  Gregor loses the tail and soon finds a poker game with some bad guys.  He questions them about where the cape is and who possesses it.  The men provide little answers because nothing is really known about the Cape.  Gregor kills all four men by throwing playing cards in their necks out of frustration.

Faraday confronts Gregor at dinner right before he is to leave.  Gregor disappears in a flash of smoke.  Faraday heads out to find him.  Gregor takes over the circus during a performance putting all of the performers into death traps.  Cape comes in at the last minute to save the day and stop Gregor.  Max tells him that no prison will be able to hold him, and as long as Gregor is alive, he will come back for the cape.  Cape says he is not a murderer.

I thought the episode was good.  You have to get over the fact the show is over the top and most of the acting is not that good.  But I really liked Gregor as a villain.  The opening of the episode was a great introduction to the character.  Also, I think that Chess is the best actor on the show, and I am excited for them to start using him more.  The episode not so subtlely implies that Orwell is Chess’s daughter.  Not shocking but it will be interesting to see how they play it out.

What did you think of the episode?  Will you continue to watch the series?