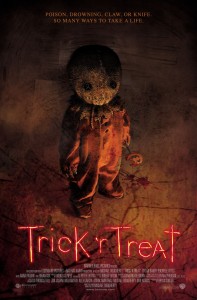 Michael Dougherty’s anthology film is in love with Halloween and captures the fun, dark, and creepiness of the holiday to success while also providing a fast paced and engaging film.

The film is a quick tale over the events of one night of Halloween in a small Midwestern town that embraces the holiday with open arms. Loosely connected and tying into one another we follow the path of a killer school principal, a group of young girls looking to de-virgin their young companion, a group of young students investigating the towns oldest ghost story, and an old shut in that hides from the night of Halloween inside his run down house. When the film settles on one story it pretty much sticks with it till its run its course, but Dougherty does a pretty good job at blending them all together into a more cohesive film that runs together rather than breaking it up with title cards are what have you; think Traffic or Syriana.

I guess I should throw a little history on this picture while I am at it as well as this flick has been sitting on Warner’s shelf now for the last few years, outside a couple of festival appearance, and has been pushed back from being release theatrically time and time again for some unknown reason until finally finding it’s way this fall direct to video. I think Warner missed out on a real chance to make some good bank with this picture as fresh and fun Halloween material is nowhere to be seen in most films marketed this time of year.

The film never reaches terrifying levels but also doesn’t dip into a well of pop up scares to get its kicks. The film will tense you up and put you on edge a plenty and the legend the younger students investigate is executed in a haunting and eerie flashback that is the highlight of the film. But most importantly the film is a blast to watch and a lot of fun which is what makes this film so easy to enjoy. It’s not a send up or straight up horror film, it lies somewhere in between and is always respectful to the genre and never spoofy. In fact, its linking protagonist is quite the little creepy but likeable creation that you can’t help but enjoy.

Dougherty’s writing has plenty of good laughs and its comic book inspirations and pacing really help things move forward. Never a dull moment in the picture, it doesn’t hurt anything that it is a shade under 90 minutes, in fact it works wonderfully to not over stay its welcome. The film is a nice little Halloween treat you can enjoy when you need to get in the holiday’s spirit.

The actors in the film also have quite a bit of fun with Dylan Baker getting the best stuff to work with. His tale is by far the darkest and most f’d up of the film but it also had me laughing the hardest and having a lot of fun with a really faux pas subject matter, kids dying. Brian Cox gets to have the most fun with his climatic clash of the film and the fighting is both fun and surprising while Cox chews up the scenery as his haven becomes his hell. Anna Paquin shot this pre-Sookie Stackhouse and she is cute and harmless as our stories little red ridding hood virgin who might get into more than she can handle. The real accomplishments in this film though come from the number of solid turns by the multiple kids in the film that play bit parts to leads depending on the story. Everyone involved with the local legend does some solid work and do a convincing job at keeping us on guard and unsuspecting of their plots next turn. There are a bevy of other cameos and parts for some familiar faces as well with everyone doing a just fine job in their little bits here and there.

In the end, Trick ‘r Treat is a fun and entertaining horror movie that is perfect for a little Halloween spirit. Providing a variety of characters and stories and moving along at a whips pace there is very little to complain about in this picture. It might not be the scariest horror film, or the cleverest homage to the genre ala Shaun of the Dead, but it will suck you in for the course of its run time and have your revisiting it on the holiday for years to come.