The New Model: I pay you $99 for a $600 portable computer, and in return I promise to pay you $20 a month for the next 2 years for the phone. If I don’t like your service, I’m free to go to another carrier whenever I want.

They’ll even buy back your phone at “fair market value” if you want to ditch everything altogether. But these T-Mo phones are also compatible with AT&T’s 3G and 4G (including LTE) radio frequencies, so switching is even easier. Most AT&T phones do not carry over to T-Mobile’s network, as AT&T only asks for their devices to work on their own networks. Sounds like a sweet deal for them: make you sign a contract for a phone that you can’t fully use anywhere else. And you can bet that they won’t discount your monthly bill for bringing your own phone along for the ride.

With T-Mobile, you’re basically buying your phone with a zero-interest installment plan. That’s the “catch” or the “gotcha” that you were looking for. But is it really that bad? Let’s dive into the new plans:

When you combine the cost of the device along with the plan, T-Mobile is still the best value. To pay $90/mon on AT&T, you’d have to cut your minutes from Unlimited to 450, drop texting completely, and settle for a 5GB limit instead of unlimited data. That’s a lot of compromising, and you still pay twice as much for the device up front. Sprint has the pleasure of being the cheapest option by $10/month.

Sprint’s coverage in St. Louis may be better, but T-Mobile’s data speeds are 10 times faster. Would you rather get 0.5-2Mbps all the time or 5-20Mbps most of the time? And 4G LTE is around 3-5 times faster than that, with better coverage than either technology. If T-Mobile brings LTE to the Lou before Sprint, I envision a mass exodus of Sprint customers hopping over to T-Mobile. LTE is Sprint’s only hope at keeping their seat at the table.

T-Mobile has made a bold start in trying to catch up to the others. They lit up seven markets with 4G LTE last Tuesday:

No telling when St. Louis will get the LTE love from Magenta, but Sprint still hasn’t mentioned our name in any of their press releases. My guess would be Sprint LTE arriving sometime this summer, with T-Mo bringing it after that (possibly at the end of the year but more than likely in 2014). If you’re due for a new phone and want to be ready, here’s a list of some of the more popular phones and their off-contract pricing across the Big Four carriers: 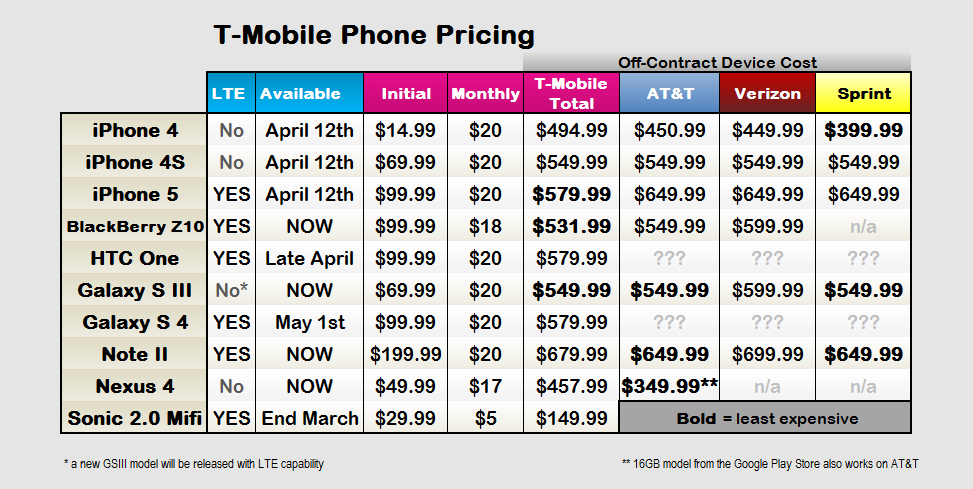 The more popular phones out right now have the best price over at T-Mobile, with only a $100 buy-in. Combined with offering true unlimited 4G data over 42Mbps HSPA+ and LTE, T-Mobile is poised to shake-up the wireless industry, even without a curse word to grab your attention. I’ll be damned.

iPhone 5 Gets a T-Mobile Release Date!

Many were excited when the next hit on Thursday that T-Mobile is finally officially getting the iPhone. Last year they promoted bringing unlocked iPhones over to their network, but the time has finally come to sell Apple’s flagship device.

T-Mobile will start selling the iPhone 5 on Friday, April 12 2013 – but is taking down contact information for future updates on when pre-orders start. Find out more information at t-mobile.com/iphone-5.