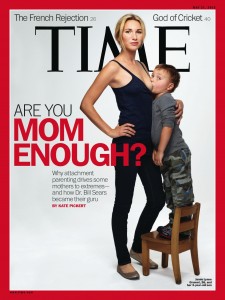 Time Magazine: "Are You Mom Enough?" Cover for the Upcoming Issue

Time Magazine released their upcoming cover for the May 21st issue, featuring a cover story on attachment parenting. But what sparked a debate across the internet was not as much the article as it was the controversial cover. The magazine shows a 26-year-old mother (Jamie Lynne Grumet) standing while breastfeeding her 3-year-old child, who climbed up on a chair to reach his mother’s breast.

The publication has raised a number of concerns, from whether or not it is appropriate to put the image on newsstands to should the mother be breastfeeding past 3. And of course, internet users everywhere have weighed in on the topic. Today.com held a poll about the cover, where 131,000 users weighed in. The results showed only 27% said “It’s great!” where a whopping 73% said “Eh, I don’t really want to see that.”

So with this much controversy, the question is: was it a success? I would say yes.

The May 21 issue doesn’t even come out for another week and a half, and it was become the number one searched term on Google. That’s not to mention all of the publicity they are getting on television, radio, social media and everywhere else. That’s what we call free marketing.

If you want to find out what they are actually talking about in the article, you can visit Time Magazine’s website. This is what you get:

The Man Who Remade Motherhood

Joanne Beauregard is nothing so much as she is a mother. When she and her husband had trouble conceiving, Joanne quit her job as an accountant to focus full time on getting pregnant. When she did, she chose to give birth at home, without pain medication. Then, for months, Beauregard sat on the couch in her Denver-area living room, nursing her infant from sunup to sundown. She nursed much of the night as well, since the baby slept in bed with Beauregard and her husband Daniel, a software engineer.
When Beauregard got pregnant with her second child, she continued breast-feeding her…

So basically nothing. You either have to buy an online subscription, or pick up the magazine from newsstands to figure out what the crazy cover is actually all about. Pretty genius if you ask me. So what does this mean for traditional media? I haven’t heard this much buzz about Time Magazine in… ever.

Here is video from the Today Show Friday, where Jamie Lynne Grumet defends her choice to be on the cover, as well as her attachment parenting techniques that landed her there:

What do you think about the cover? Is it appropriate to put on the shelves for all to see? Tell us in the comments below.