“I think that’s the best I’ve ever seen.”

“The sets were amazing.”

These were the first words I heard as the curtain closed after the opening night performance of Marry Poppins at the Peabody Opera House. And I have to say that I couldn’t agree more.

Of course, growing up I watched Mary Poppins, the classic Disney musical starring Julie Andrews and Dick Van Dyke, several times. The story was always intriguing, and the music was such fun and so clever. So naturally when I heard that it had been adapted into a musical, I was excited – but a bit skeptical as well. Skeptical not because I didn’t think it would make a good play, but because I wondered if they could pull off the magic of the beloved film. And the answer is yes, “in the most delightful way.” 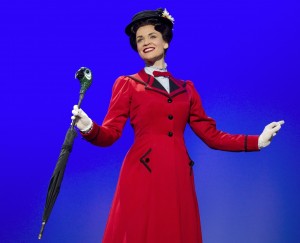 Marry Poppins takes place in London, England during the early 1900s. The show takes place on Cherry Tree Lane, primarily at Number 17 where George (Michael Dean Morgan) and Winifred (Elizabeth Broadhurst) Banks live with their two troublesome children – Jane (Marissa Ackerman) and Michael (Zach Timson). Bert (Case Dillard) is a chimney sweep and jack of all trades who guides the audience through the show. After scaring away nanny after nanny, the kids decide to place an advertisement of their own for the perfect caretaker. Their father finds it ridiculous and tears it to pieces, only to have none other than Marry Poppins (Rachel Wallace) magically appear in their household. However strange it seems, the Banks are left with no other choice but to give her a chance – and what follows is pure magic.

Rachel Wallace is absolutely delightful and remarkably cheerful as the “Practically Perfect” Mary Poppins. Her portrayal is of the prim and proper caretaker is out of this world, as she transforms dreary London into a colorful playground before our eyes. Her British accent is spot on, and her demeanor is perfect for the role. 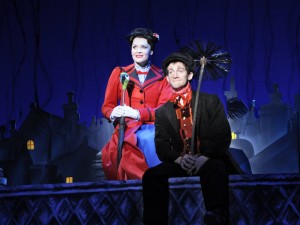 Case Dillard, who plays Bert, steals the show whenever he comes on stage. Dillard lights up the stage with his charismatic portrayal of the lovable sweep, whose intentions are as pure as gold. His charm and exuberance is undeniable during the show, and the energy he puts into his performance keeps things lively from beginning to end.

The music is wonderful, featuring many of the classic songs we have come to love over the years as well as some new ones. I couldn’t help to smile once “A Spoonful of Sugar” started after much anticipation, and their rendition of “Supercalifragilisticexpialidocious” is absolutely incredible. Major credit goes to Matthew Bourne and Stephen Mear for the choreography on that number. The entire cast recites a mouthful of letters in the musical number, while jumping around and spelling out the word letter by letter with their bodies. It was incredible to watch how masterfully they pulled it off, and it truly was a sight to see. “Step in Time” with Bert and the rest of the sweeps was one of the numbers I most looked forward to, and I really enjoyed the way it turned out. 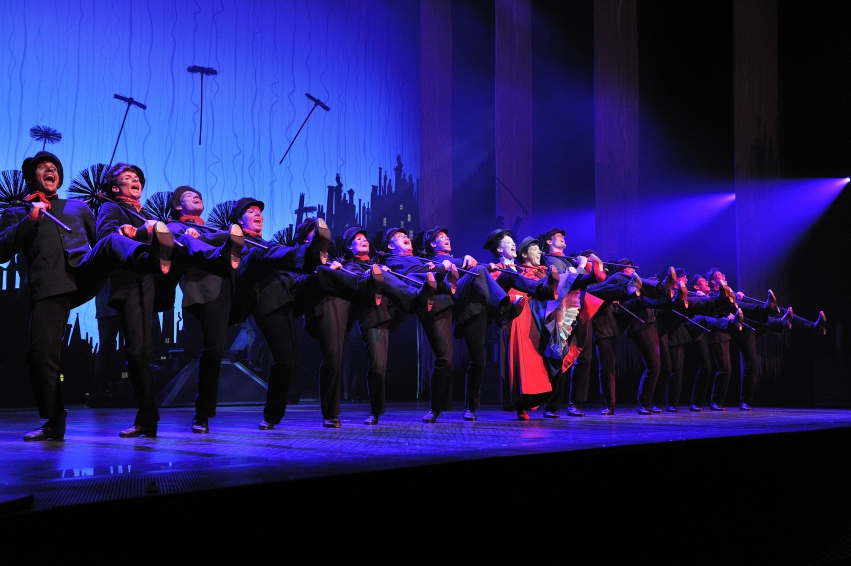 The Cast of "Mary Poppins" performing "Step In Time"

The set for Mary Poppins is one of the most creative I have ever seen in a live show. Number 17 Cherry Tree Lane literally unfolds before your eyes, as what appears to be a giant dollhouse transforms into the Banks residence. It is an extremely clever concept for a set, and was magnificent to behold as the show transitioned from scene to scene. But that isn’t where the visuals ceased to amaze. The way that scenes would go from boring and dull to bright and colorful in an instant with Marry Poppins’ help was amazing. That was one of the things I was worried about, wondering how they could pull off the magic from the movie. But it went off without a hitch, and exceeded my expectations.

I couldn’t have been happier with the way that Marry Poppins turned out. It met and exceeded all of my expectations, and captured the magic and fun that I remembered so dearly growing up. The show is family friendly and fantastic for children of all ages – making for one of the most fun performances I have seen. The show truly has that Disney magic that we have come to love over the years, and I bet you would be hard pressed to find someone who didn’t thoroughly enjoy themselves after the performance.