If you’re not excited about Cardinals baseball by now, I dunno what to tell ya.

This team is good.

Enjoying the only off day in May today, they’ll enter a three game series against the Atlanta Braves with a 20-11 record and a 3.5 game lead over Cincinnati. The team concluded an unusual streak of 27 straight games against division opponents, and they managed to go 16-11 against them, winning seven of the nine series. They got to Arizona, considered a contender in the NL West, and hit their pitchers so hard, their grandchildren will be feeling it. Enjoy this, folks. In the last four games, the team has outscored their opponents 30-10.

For the season, the team has scored 174 runs and permitted just 99, both second-best in the majors. They’ve racked up an impressive run differential of 75, seven better than the second-best Rangers.

Now, it’s pretty early in the season. Too early to declare this team one of the greatest of all time or anything. At this pace, though, they’ll win 105 games, which would tie the 2004 team for the second most wins in franchise history, two behind the 1942 team, which played only 154 games. For the record, the best total ever was 116 by the 1906 Chicago Cubs, who played only 152 games (other teams have won 116, but played more games to do so).

More remarkably, this team has scored runs at a more prolific rate than any Cardinals team in the last 80 years. They’re scoring 5.6 runs a game, which would put them on pace to score 909 for the season. Only the 1930 team scored more than 900, and they managed an absurd 1,004 runs in 154 games.

Think about that. Even without Pujols, this team’s cranking the ball. Even in the last 20 years, when we’ve had some mashers on the team, they haven’t come close to this. The closest any Cardinals team has come was the 2000 team, when they scored 887. Even the highest-scoring MV3 team, the 2003 Cardinals, only managed 855.

Now, the pace will likely slow, as some of the Cardinals have jumped out to incredibly hot starts.

Rafael Furcal ranks fifth in the league, hitting .361 average. He’s in the midst of a nine-game hitting streak, having gone 18 for 38 (.474) in that stretch. Among shortstops, he ranks third in OPS.

Carlos Beltran, it’s safe to say, has found his stroke, having gone 11 for 28 in his last eight games with five home runs and a ridiculous 16 RBI, thanks in large part to two career games in which he drove in seven and six runs. He leads the team in OPS with a slashline of .284/.391/.569 and also leads the team in home runs (10) and RBI (27). He’s second among all right fielders in OPS.

Allen Craig recently returned from the disabled list and has quickly shown his post-season form. In just seven games, he has three home runs and 11 RBI.

Even after a relatively slow start, Matt Holliday’s picked up the pace. In his last nine games, he’s gone 14 for 35 (.400) and driven in nine runs.

So much offense. That’s not even mentioning Yadier Molina (.302, 16 RBI so far) or super fill-in Matt Carpenter (16 RBI in just 78 at-bats). How about the 27 stolen bases the team’s already accrued? Mike Matheny said this team would be running, but…damn.

Holding up their end, the starting pitching has been ridiculously good. Lance Lynn leads the league in wins (6), and his ERA (1.40) and WHIP (0.85) are also among the league leaders. Kyle Lohse has been strong as well, going 5-1 so far with a 2.08 ERA. Jake Westbrook, one of the most maligned pitchers last year, already has four wins and a 1.76 ERA. He’s probably benefited the most from the improved middle infield. A true worm-burner, having Furcal at shortstop is a pretty vast improvement over Ryan Theriot. Even Adam Wainwright, who started off a bit slowly, is regaining his ace form, having gone 2-0 with a 2.70 ERA in his last three starts. The bullpen has had some shaky moments, but overall it’s been solid, with Mark Rzepczynski, Mitchell Boggs, Victor Marte, and Kyle McClellan all off to decent starts. The closer, Jason Motte, is still throwing heat and now has six saves on the still-nascent season.

The best part of all this? They’ve managed to do this even with some of their stars injured. Lance Berkman’s missed the last 22 games with a strained calf, and Chris Carpenter hasn’t even thrown a pitch.

Now, I know, it’s still pretty early, and there’s a long way to go. Guys will wear down or get hurt. That’s the thing, though. This team has the depth to absorb the loss of some of their every day guys and still roll on. So far, Cincinnati’s been the only team that’s been able to roll with the punches; the rest of the Central is either six or seven games back. Milwaukee’s had the roughest go of it. Predicted before the season to be a contender, has had to deal with the loss of three starters for the rest of the season: first baseman Matt Gamel and shortstop Alex Gonzalez both tore their ACL, and starting pitcher Chris Narveson underwent shoulder surgery. In addition, their starting center fielder Carlos Gomez is on the 15-day DL and reigning MVP/retainer of the world’s best appeals lawyer Ryan Braun is dealing with a sore Achilles. 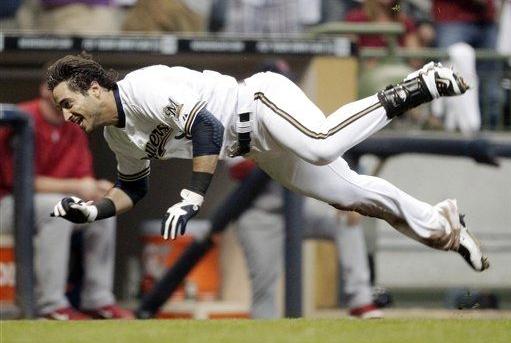 You, uh, you missed a step.

And no, I haven’t forgotten about the Blues and the Rams. When I get a chance, I’ll do a bit of a write-up on the Blues’ season and the Rams’ draft. I’ve been working on setting up the volunteers for a couple major beer festivals this summer, and that’s drained a lot of my free time. Soon enough you’ll be treated to my mediocre writing on a regular schedule.