Theatre Review: The Rep’s PRIDE AND PREJUDICE Offers a Fresh Take On An Old Classic 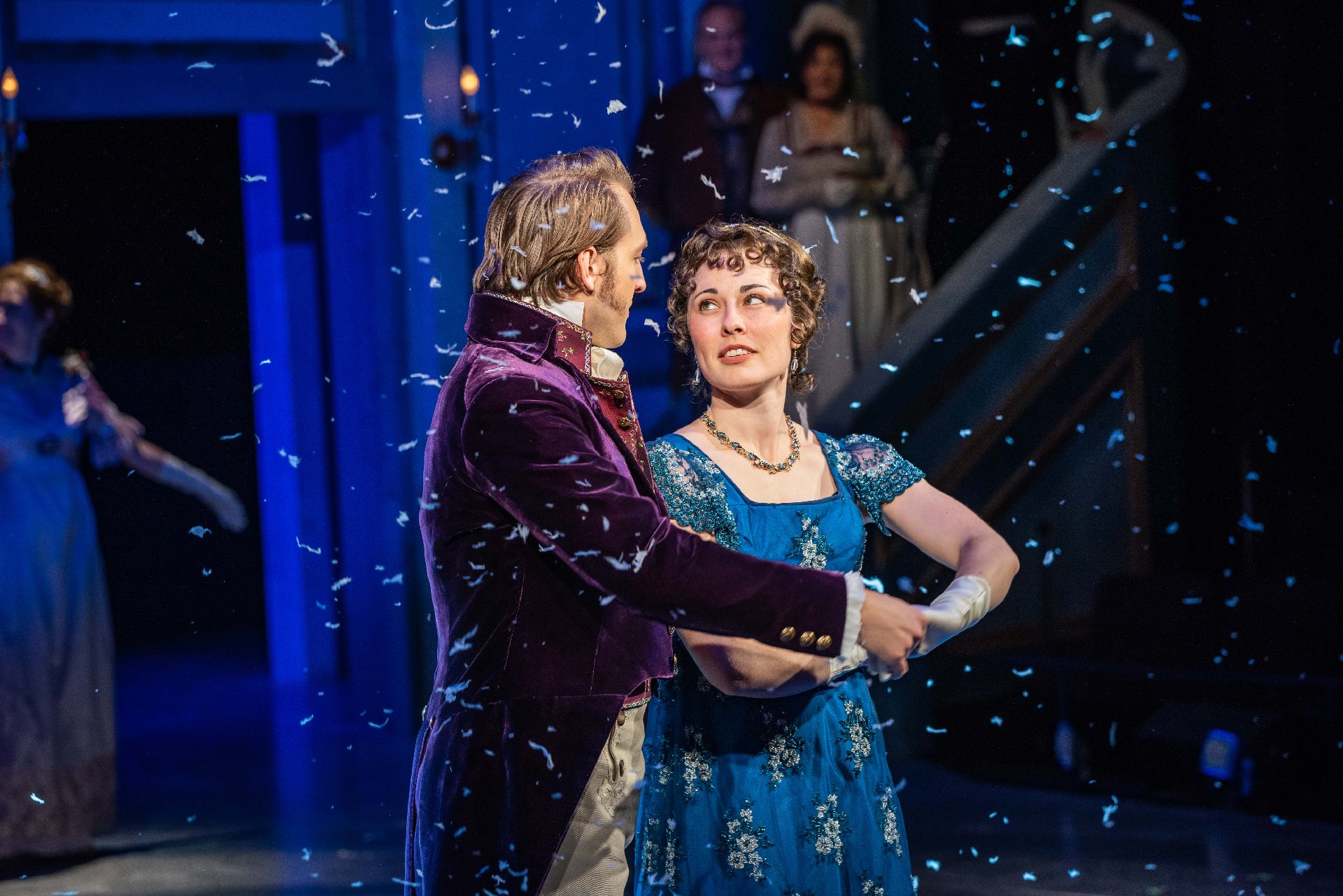 They don’t call it a classic for no reason.

Jane Austin’s Pride and Prejudice is one of the most well-known novels in existence, with numerous stage productions and film adaptations over the years. Yet, The Repertory Theatre of St. Louis has not simply staged just another copy of the beloved story. Artistic Director Hana S. Sharif helms this production and brings to it a lively, updated flair that both keep it endlessly captivating and true to the author’s intent.

You know the story; Mr. Bennet (Michael James Reed) and Mrs. Bennet (Michelle Hand) are discussing the latest resident of Netherfield – the most eligible of bachelors, Mr. Bingly (Grayson DeJesus). With him comes his sister Caroline (Jennie Greenberry) and his oldest friend, Mr. Darcy (Nick Rehberger). The Bennet’s four daughters – Jane (Rebecca Haden), Elizebeth (Katie Kleiger), Mary (Maison Kelly), and Lydia (Sydney Leiser) are interested to hear more about Mr. Bingly – although it is customary that the eldest, Jane, would be paired off first if such occasion presented itself. Much to the girls’ surprise, Mr. Bennet has already introduced himself to Mr. Bingly, and a ball has been arranged at his behest.

Adapted for the stage by Christopher Baker, the play makes a smooth transition from the page.

Although the story revolves around all of the Bennets, it focus on the romance between Elizabeth and Darcy. At first glance, the audience couldn’t imagine how the two would ever fall in love. Yet, think of every romantic comedy or film you have ever seen, and doesn’t the situation sound familiar? This really is the archetype for the modern love story. 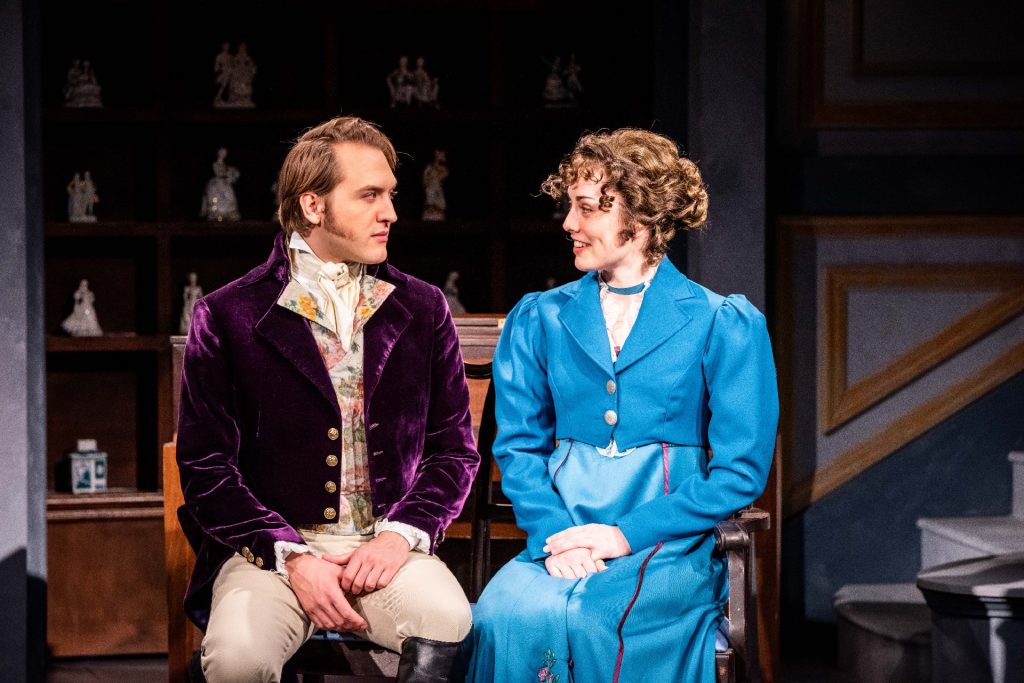 The entire cast is marvelous. There isn’t a week spot in the show as far as acting is concerned.

Reed and Hand are wonderful as the heads of the Bennet family; their bickering and banter are amiably delivered with the lovingness that any married couple can understand and appreciate. And both actors are able to garner laughs without saying a word, simply by giving a look or carrying themselves a certain way as they walk around the set.

Haden is delightful as the eldest Miss Bennet, whose kindness is always apparent in the character. Her chemistry with DeJesus is wonderful, as we watch the rollercoaster of her relationship with Bingly head down the tracks. Kelly makes for a fine Mary, curious and eager to show off her piano skills. Leiser plays the youngest Bennet, naive and anxious to grow up – as most children are. All of the girls are fantastic.

The stars of the show are unsurprisingly Katie Kleiger and Nick Rehberger as Elizabeth and Darcy. 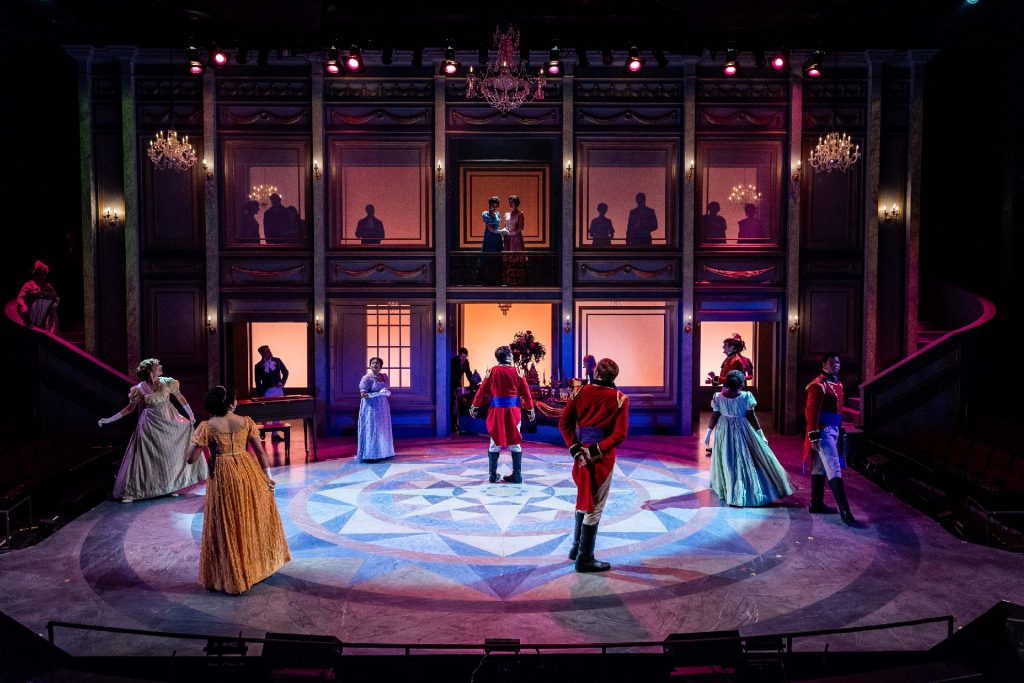 Kleiger has a magnetic personality, appearing as intelligent and charming as the character was written. She is superb at delivering the witty dialogue and exhibiting the strength of woman who is ahead of her time. The second-eldest Miss Bennet is never afraid to speak her mind, or stand up for her beliefs. And when it comes to Darcy, who is as eligible a bachelor (if not more) as Bingly, she doesn’t hesitate to mince words.

Meanwhile, Rehberger is the perfect Darcy. The actor comes across as stoic, cold, and unpleasant until we get to know him. But slowly that starts to change as he and Elizabeth get to know one another. Over time he lets his guard down, as the actor emotes with his eyes and body language. Darcy is quiet, but there is much to be said by his character. Rehberger is masterful in this display, and gets the chance to shine in ACT II when his character is inspected more closely.

The two leads have a great chemistry, and it’s exhilarating to watch these beloved characters fall in love once again. 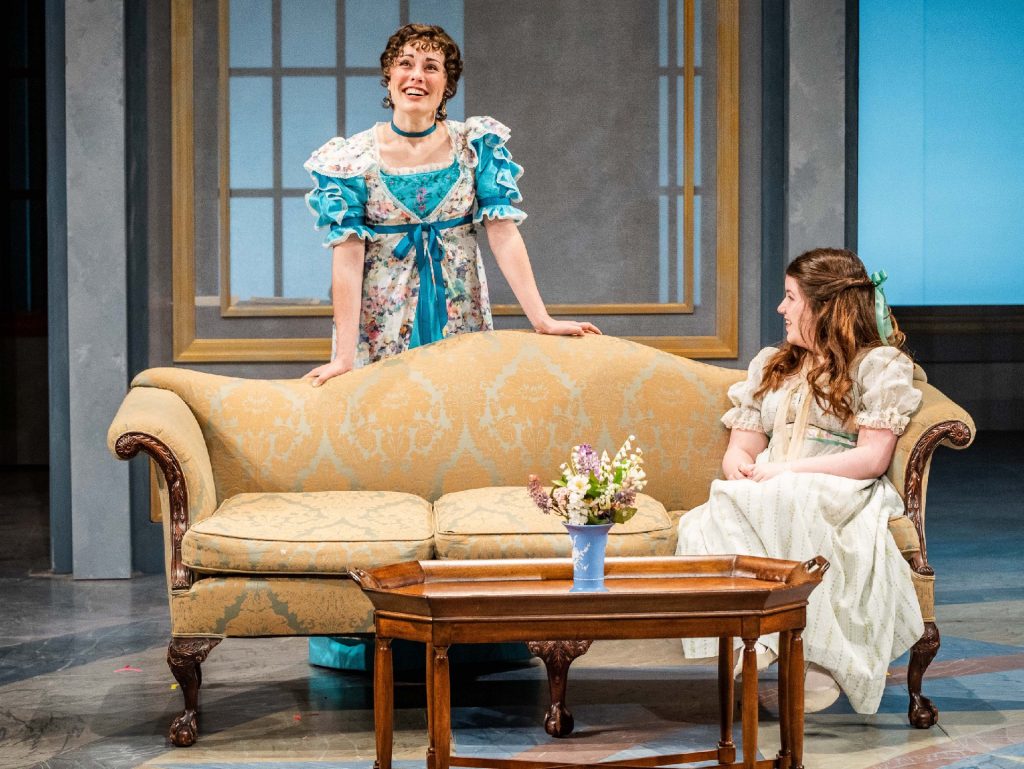 The scenic design from Scott Bradley is gorgeous, something I’ve come to expect from The Rep. Through a mixture of practical sets and creative video projection lead by Alex Basco Koch, the audience is able to travel around England and through numerous estates with minimal disruption or wait times during transitions.

The actual actors in the show were filmed for transition pieces that were quite powerful, especially set to the brilliantly placed anachronistic music – a modern, hip-hop infused spin on the sounds of the time period composed by Nathan A. Roberts and Charles Coes.

Any time you are going to see a period piece, the costumes are characters unto themselves. Dorothy Marshall’s designs are stunning, and especially mesmerizing to watch during the party and dance scenes.

Pride and Prejudice has long been one of my favorites, and The Rep’s latest production excels under the leadership of Hana S. Sharif. With an excellent cast, wonderful sights and sounds, and some fun updates – this is one of the best versions of this story I’ve seen yet.