Another Take on STAR WARS: THE RISE OF SKYWALKER

(Excuse my brief history with the franchise. I promise I get into Episode IX: The Rise of Skywalker a few paragraphs down.)

Star Wars. Oh, what an incredible journey it has been. 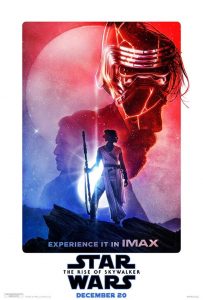 It’s been years since I’ve attended midnight showings of the prequel trilogy where every seat was filled and additional people sat on the floor in the aisles to watch a new Star Wars movie. It’s been years since I’ve had lightsaber battles in my friend’s backyard at three in the morning following those midnight showings. It’s been even longer since the VHS tapes of the original trilogy were in constant rotation in my childhood home while my brothers and I made our myriad of Star Wars toys come to life simply with our imagination. I remember checking out Star Wars books in the school library and playing video games, board games, or just running around with toys dedicated to Star Wars with my friends in our backyards.

The point is Star Wars is huge, but you know that. You’d be hard-pressed to find anyone who doesn’t know where “May the Force be with you” originates from. It has inspired so many people of all ages since being introduced in 1977, and the fiery passion the fans hold in their hearts for the property burns hotter than the two suns of Tatooine. Just check Twitter.

Since Disney purchased LucasFilm in 2012, they’ve kept the Star Wars spirit alive by expanding the universe with the juggernaut that was Episode VII: The Force Awakens and the incredibly divisive Episode VIII: The Last Jedi, (not to mention the two side stories in between with Rogue One and Solo). Needless to say, Disney has been busy with the property, which brings us to the inevitable conclusion to the new trilogy and the entire episodic space opera itself now-dubbed “The Skywalker Saga” – Episode IX: The Rise of Skywalker.

Much like any blockbuster film and even more so by it being Star Wars, it’s going to be difficult to dissect the film in this review in too much detail without giving away spoilers. Rest assured, I’ll say what I can without giving anything away but trust me when I say there is A LOT to discuss when it comes to this epic conclusion to the saga and if the past four years have been any indicator, the fans’ voices will be heard both now and for years to come.

In The Rise of Skywalker, our new cast is continuing where they left off in the previous films. While deeper with her connection to the Force, Rey (Daisy Ridley) is still working toward becoming a full-fledged Jedi, now under Leia’s instruction. Finn (John Boyega) is no longer trying to run away as we’ve seen in the previous films and has found a home with the Resistance, and Poe Dameron (Oscar Isaac)…well he’s still the best-damned pilot in the galaxy, but this time, we get to see a lot more of him in action with a more leading role.

On the other side of the Force, Adam Driver returns with perhaps his best performance in the trilogy as the Supreme Leader, Kylo Ren. Kylo is investigating a familiar voice in his head leading him to the darkest trenches of the galaxy to discover a sinister plot unfolding that hopes to eliminate the Resistance and the last remaining Jedi once and for all.

From here, in typical Star Wars fashion, we’re led on a journey through several beautiful new worlds as Leia and the Resistance catch wind of the looming threat from scouts and spies placed throughout the galaxy, even including one in the evil First Order itself (how convenient!) At the same time, however, our heroes begin to play a game of following the next McGuffin to move the plot along. First, it’s this device that our heroes need and then it’s that gadget that’s needed to move the story along, but at least it’s entertaining along the way.

JJ Abrams is back in the director’s chair after directing Force Awakens but sitting out for Rian Johnson’s The Last Jedi. While Johnson is, to this day, still heavily chastised by fans for some bold decisions that he made with his film, I can’t help but feel like some of the decisions made in Rise were weighed down by Abrams trying to cater to the disgruntled fans. It almost felt, at times, like two movies being told at once which makes it feel a little convoluted, despite moving at a brisk pace. There wasn’t necessarily any retconning of the decisions made by Johnson, but more of a “what if” being asked when expanding on them all while trying to remain unpredictable. (Did I mention it’s really hard to say what I want to say without spoiling anything?)

It’s no lie, Rise of Skywalker has its back up against the wall with the task of closing out not only the new trilogy, but the entire nine-episode saga itself. I think it succeeds in capturing the spirit of Star Wars in a lot of different ways. The John Williams score is fantastic, as always. The cinematography is, at times, breathtaking (though I think I’d still put it behind Rogue One and Last Jedi). On top of that, I think the film produces some of the most emotionally gripping scenes in the franchise as a whole, including a tear-jerking callback to Empire and another scene I’d even liken to that Endgame moment from earlier this year.

As a lifelong fan of the franchise, I was enamored throughout most of the film, having no idea what was to come and anxiously waiting to find out. So much fan-service is provided through callbacks and cameos that should have all the fans smiling as I was from ear to ear and maybe even welling up at the emotional beats too. Although flawed, this truly is a love letter to the original trilogy most of us grew up watching and I’m just happy to be thirty-two years old and feeling like a kid again, if only for two and a half hours.