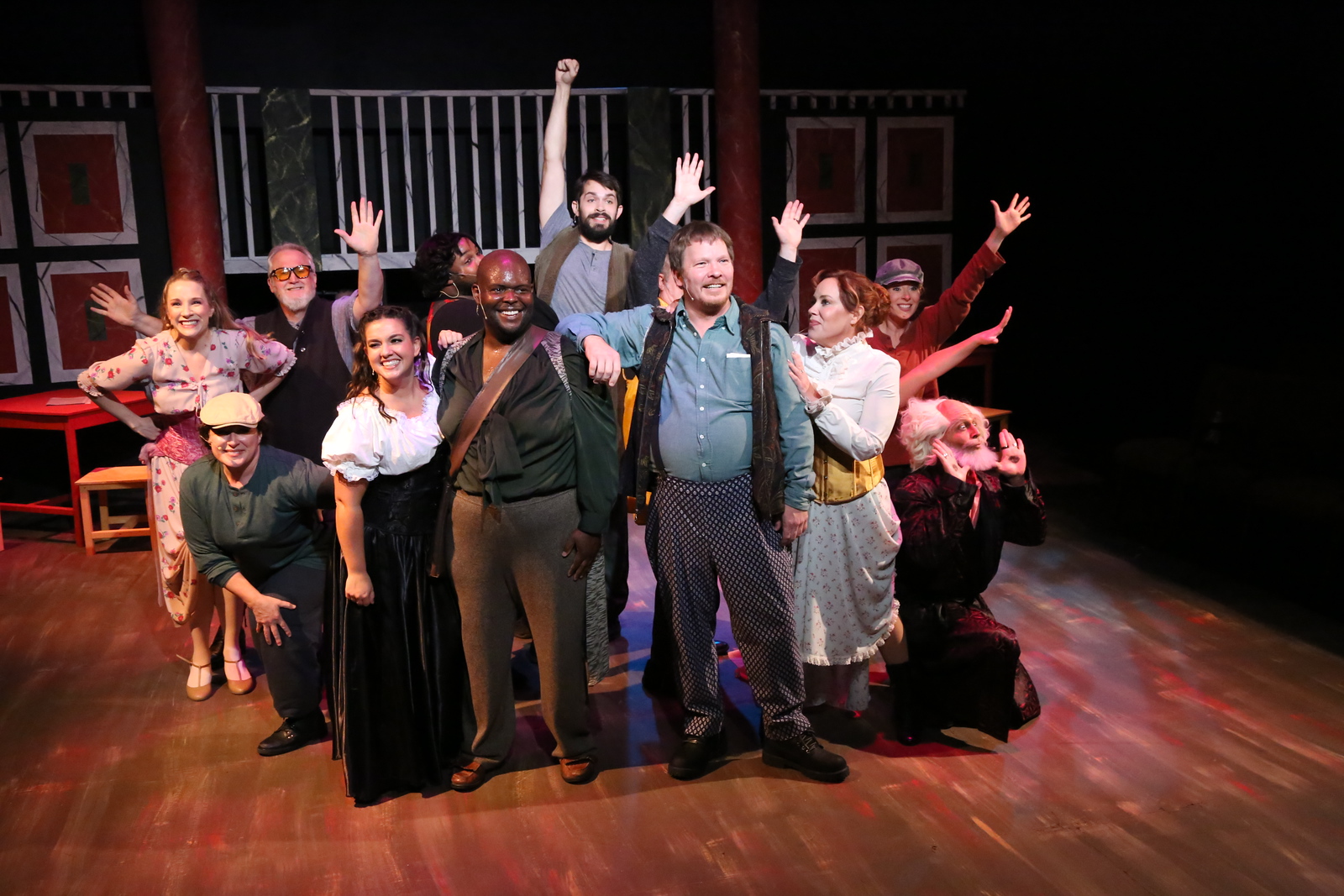 No matter if it’s a big Broadway show or a promising tryout that flew under the radar, St. Louis audiences know they can expect great productions from New Line Theatre. In the case of Something Rotten!, currently playing The Marcel through Oct. 15, they’ve taken the hit musical comedy and turned it into an intimate evening song, dance, and lots of laughs.

Nominated for ten Tony Awards, Something Rotten! follows Nick (Chris Kernan) and Nigel (Marshall Jennings) Bottom, playwrights and brothers who are forced to compete with William Shakespeare (Clayton Humburg) in 1595 London. After making his frustrations with the Bard well known (“God, I Hate Shakespeare”), Nick visits a soothsayer – Thomas Nostradamus (Jeffrey Izquierdo-Malon) – to find out what the next big thing in plays will be. In an incredible vision of song and dance (“A Musical”), full of dozens of references to iconic shows, Nostradamus convinces him to create the first musical. Meanwhile, Nigel has fallen in love with Portia (Melissa Felps) – whose father, Brother Jeremiah (Jason Blackburn) is a Puritan who loathes the theatre. With the odds against them, the brothers do everything they can to get out from under Shakespeare’s shadow before he can write his next hit.

Written by John O’Farrell and Karey Kirkpatrick, with music and lyrics by real-life brothers Karey and Wayne Kirkpatrick, Something Rotten! is one of the funniest shows of all time. The premise alone is hilarious, with a book full of witty dialogue and clever anachronisms. And the songs are fantastic, with memorable numbers coming one after another. In addition to the adforementioned numbers, other standouts include “Right Hand Man,” “Will Power,” “Bottom’s Gonna Be on Top,” and “Hard to Be the Bard.” The New Line Band lead by conductor Mallory Golden sounded superb all evening.

New Line has put together a terrific cast for the production. Chris Kernan is fantastic as Nick, a character who channels his frustrations into doing whatever it takes to beat Shakespeare. The actor has a terrific knack for comedy, and perfectly pulls off the angry-yet-lovable character. Jennings is also great as his sweet and a bit naive younger brother, who has a phenomenal singing voice. And joining them on the periphery of their antics is Carrie Wenos as Nick’s wife Bea, who constantly fights against society’s views of the time period of what is acceptable for a woman. Her chemistry with Kernan is wonderful, and her rendition of “Right Hand Man” is outstanding.

I’ve always loved the way the show presents Shakespeare as a rock star, with groupies following him around and worshipping his every move. I first saw Adam Pascal as the Bard during the national tour, and Clayton Humburg has the charisma and the demeanor to step right into those shoes. The actor is sensational, pulling off the idolized character with every bit of charm and swagger – not to mention ruthlessness – that the role calls for. It’s clear that he is having a blast, and the audience is right there along with him. It’s a very funny performance, with great singing and dancing as well.

Another standout performance comes from Jeffrey Izquierdo-Malon as Thomas Nostradamus, who plays such a fun part in the story. His predictions of musicals and Broadway are endlessly funny, as the actor brings non-stop charisma to the role. The stage can barely contain how much fun they are having during the show-stopping “A Musical,” and his silliness and physical comedy never fails. I adored everything about this portrayal.

Speaking of comedic talent, Melissa Felps is wonderful here as always. And her scenes with Jennings are equally as sweet as the “star-crossed lovers” navigate thier feelings for one another. And Jason Blackburn is riotously funny as Portia’s father who speaks almost entirely in euphamisms, unbeknownst to him.

Robery Doyle plays the humerous Shylock and Lord Clapham, while Chris Moore is the Minstrel who opens the show and Peter Quince (a member of the Bottom’s theatre troupe). Also starring Kent Coffel as Robin Starveling, Brittany Kohl Hester as John Snug, Ian McCreary as Tom Snout, Maggie Nold as Helena/Psychic, and Alyssa Wolf as Miranda/Astrologer.

The sets, crafted by the talented Rob Lippert, are minimalistic for this show – letting the outstanding writing and performances speak for themselves. The audience is placed around three sides of the stage, creating an immersive experience. Sarah Porter’s period-appropriate costumes look great, and Alyssa Wolf’s choreography is delightful.

I’ve hoped for New Line to produce Something Rotten! since I saw that first tour, and I’m so glad they finally had the chance. Director Scott Miller has another winner on his hands, as audiences get to see one of the funniest, cleverist, and more original musicals of the past decade. Tickets are selling out fast for this one, so make sure to check it out while there is still time.

Something Rotten! plays New Line Theatre at The Marcel through October 15. Tickets and more information are available at newlinetheatre.com.