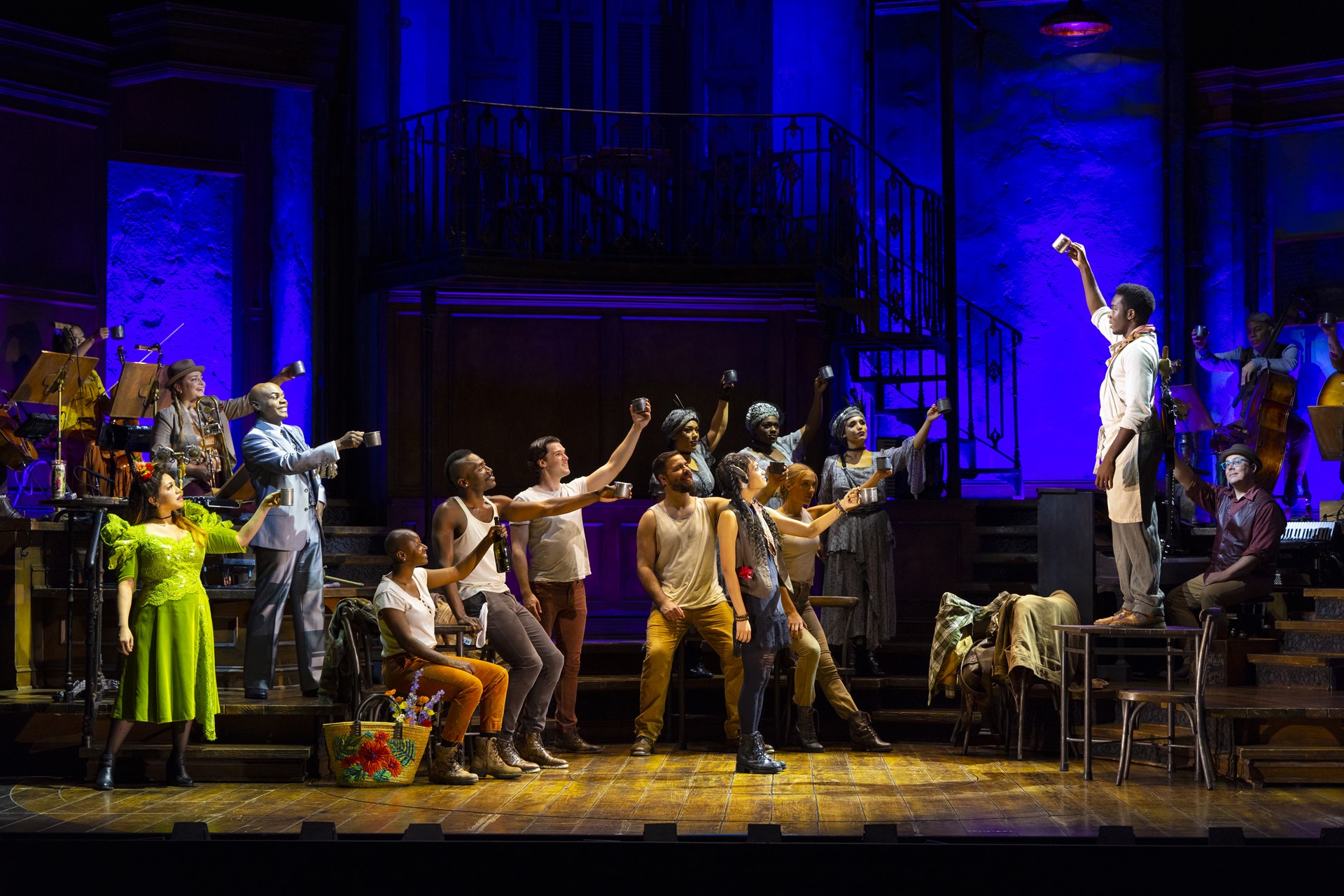 Winner of 8 Tony Awards, including Best Musical, Hadestown has made a stop in St. Louis at The Fabulous Fox through October 23.

Based on the Greek tragedy of Orpheus (Chibueze Ihuoma) and Eurydice (Hannah Whitley), Anaïs Mitchell (book, music, lyrics) created a concept album in 2010 that would be developed into the Broadway show that debuted in 2019. In this telling, Hermes (Nathan Lee Graham) acts as a narrator who guides the audience from a railway line to Hell (“Road to Hell”) to way down under the ground to Hadestown (“Way Down Hadestown”) – ruled by none other than Hades himself (Matthew Patrick Quinn). Due to the king of the underworld’s strained relationship with Persephone (portrayed by understudy Shea Renne at my performance), the seasons are out of control – causing blistering summers and harsh winters. Cold and hunger lead Eurydice to Hadestown, where Orpheus follows to save her. But the road is long and dangerous, and when people go that far down – they don’t usually come back.

Full of captivating performances, moving musical numbers, and stunning scenic design – Hadestown is an experience for which words fail to do justice. The show asks many questions pertaining to relationships, politics, climate change, and why we tell the same stories over and over. What lessons do we learn from the past, and how might things be different – even though we know how the story ends? What about hope, and what that can do for humanity?

Nathan Lee Graham is magnificent as Hermes (the role which won André De Shields the Tony for Best Featured Actor in a Musical in 2019), who sometimes breaks the fourth wall as he tells the story to the audience through song and dialogue. There are several of these moments throughout the show, solidifying that we are being told a story much like people have been doing for hundreds of years. Graham sounds terrific, and also quite a bit like De Shields – which helps those familiar with the iconic portrayal. The actor’s charismatic singing and dancing grab hold of the audience and pull them into the story, to be taken on a wild rollercoaster ride of emotions.

Ihuoma and Whitley are terrific as Orpheus and Eurydice, both with beautiful singing voices and giving heartwrenching performances. It is love at first sight for the characters, and you instantly feel a connection that holds on from start to finish. Together they delight with “Wedding Song” and “Promises,” while Ihuoma shines with his renditions of “Epic I, II, and III” and Whitley brings the emotions with “Flowers.” Ihuoma also plays guitar for much of the show, reminding me of shows like Once where the musicians are part of the story. 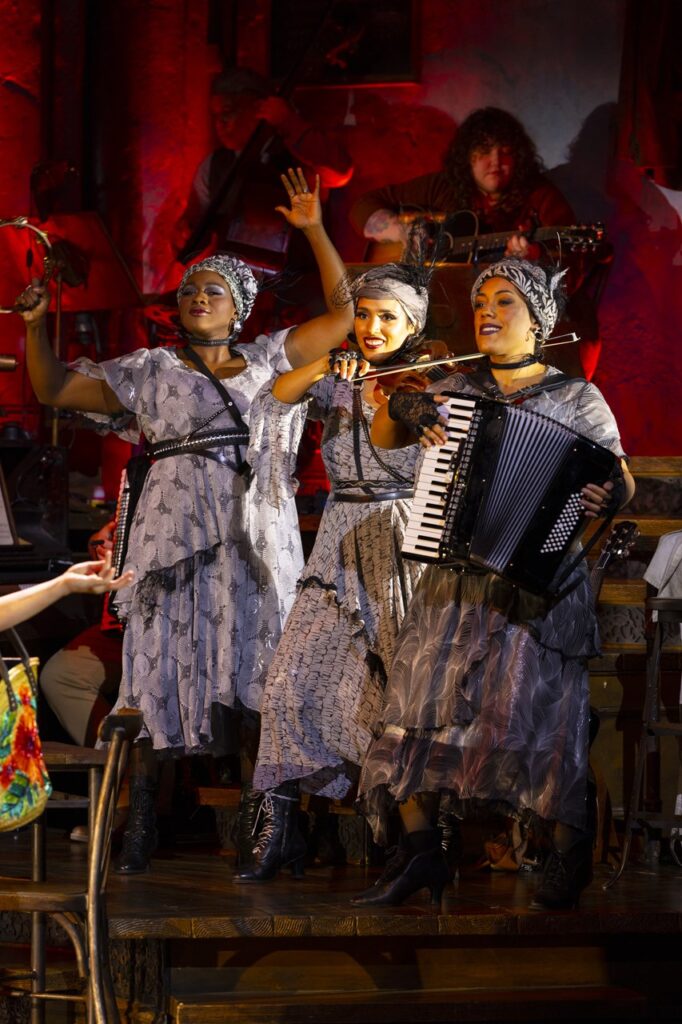 The Fates, played by Dominique Kempf, Belén Moyano, Nyla Watson, are all three fantastic as they act as the Greek chorus of the story. They help guide our characters and narrate, often while playing musical instruments themselves (like the rest of the band, save for drummer Eladio Rojas who is backstage).

Matthew Patrick Quinn is a force to be reckoned with as Hades, an evil businessman in the story who tricks workers into signing away their souls to be indentured to his horrible factory in the underworld. There he rules with an iron fist, convincing the workers they are free within his walls. His jazzy numbers are hypnotic, like in “Hey, Little Songbird,” but quickly turn frightening with a commanding, intimidating “Why We Build the Wall.” Quinn’s rich bass vocals are impressive.

Meanwhile, Persephone can’t get away from Hadestown fast enough. Shea Renne does a fantastic job with the role, switching from a bubbly, fun-loving goddess to someone who is fed up with her surroundings. The talented actor is charming and sounds great in the role.

Speaking of “the wall,” the enormous set opens up before the end of ACT I when we finally get a good look at Hadestown. No wonder Rachel Hauck won the Tony for Best Scenic Design, this impressive set is gorgeously crafted and meticulously detailed. When the stage starts to shift and opens up into the terrifying underground factory, the scale is unlike anything I’ve ever seen before on-stage. The touring production does a great job of capturing the feel of the Broadway set.

Hadestown is a love story, a cautionary tale, and an inspirational message of hope all rolled into an entertaining night of musical theatre. The toe-tapping music, influenced by New Orleans Jazz, is catchy and sounds great thanks to the orchestra led by conductor Nathan Koci on the piano. This modern telling of the classic myth is outstanding – full of excellent performances and memorable songs. It’s a testament to great storytelling, asking questions that will stick with you long after you leave the theatre.

Hadestown is now playing The Fabulous Fox Theatre in St. Louis through October 23. Tickets and more information can be found by visiting fabulousfox.com.