Theatre Review: THE MARVELOUS WONDERETTES at The Rep (Through Jan. 28) 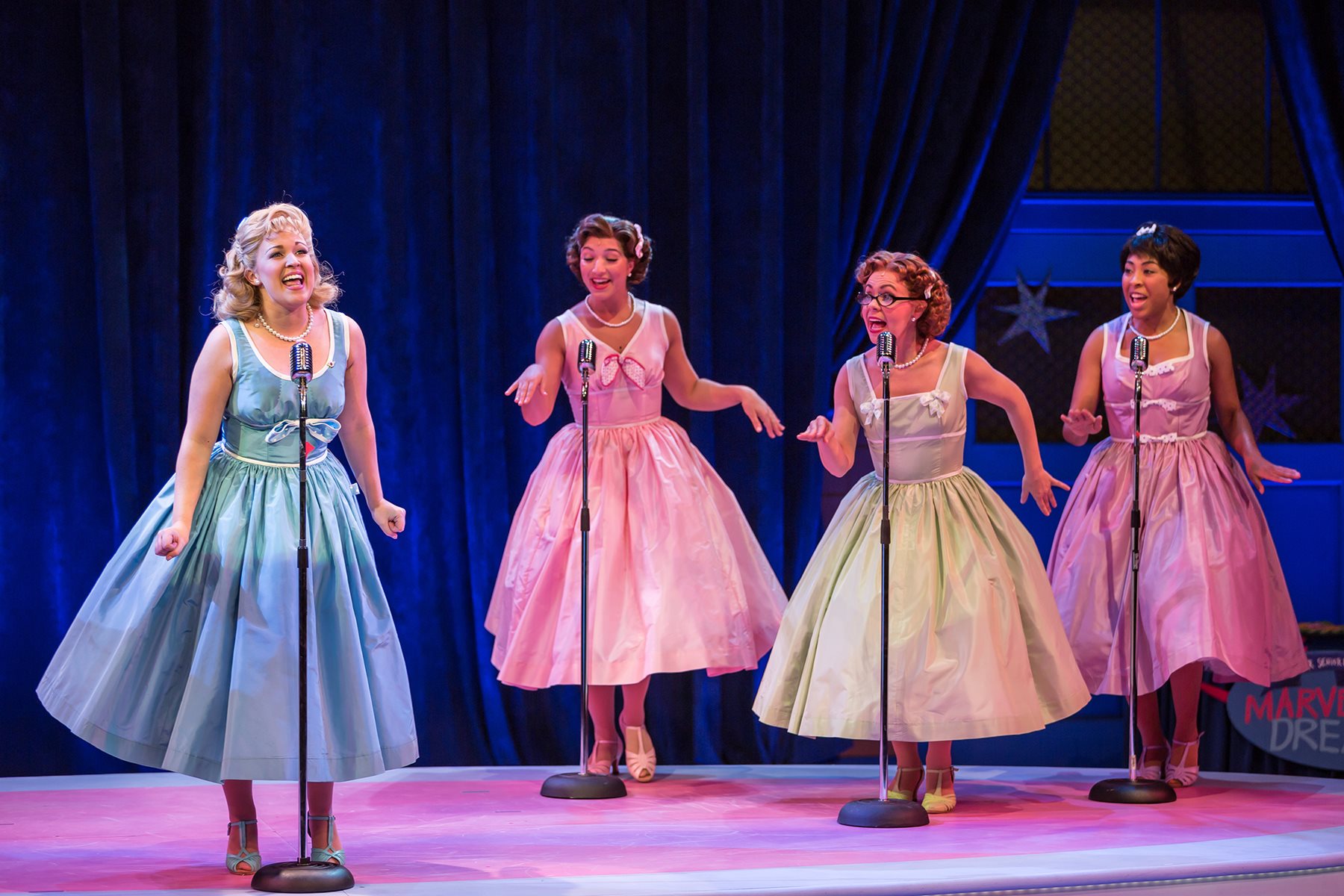 If I could travel back in time for music, the ’50s and ’60s would be high on my list of destinations. Experiencing artists like The McGuire Sisters (“Sugartime,” “Sincerely,” “Goodnight, Sweetheart, Goodnight”), The Chordettes (“Lollipop,” “Mr. Sandman”), and Connie Francis (“Stupid Cupid” & “Lipstick on Your Collar”) in real-time would be an incredible experience. Although time travel isn’t technically possible, THE MARVELOUS WONDERETTES does a great job of taking you on a musical journey from over half a century ago.

It’s 1958 at the Springfield High School Senior Prom. The original band got into trouble, so “The Marvelous Wonderettes” – comprised of Missy (Morgan Kirner), Suzy (Leanne Smith), Cindy Lou (Chiara Trentalange), and Betty Jean (Iris Beaumier) – landed the gig. The four actors share a fantastic chemistry as they navigate the pop hits of the 1950s, while also dealing with normal teenage drama. ACT I is a medley of favorites from the era, intermixed with plenty of humor and entertaining banter from the performers. 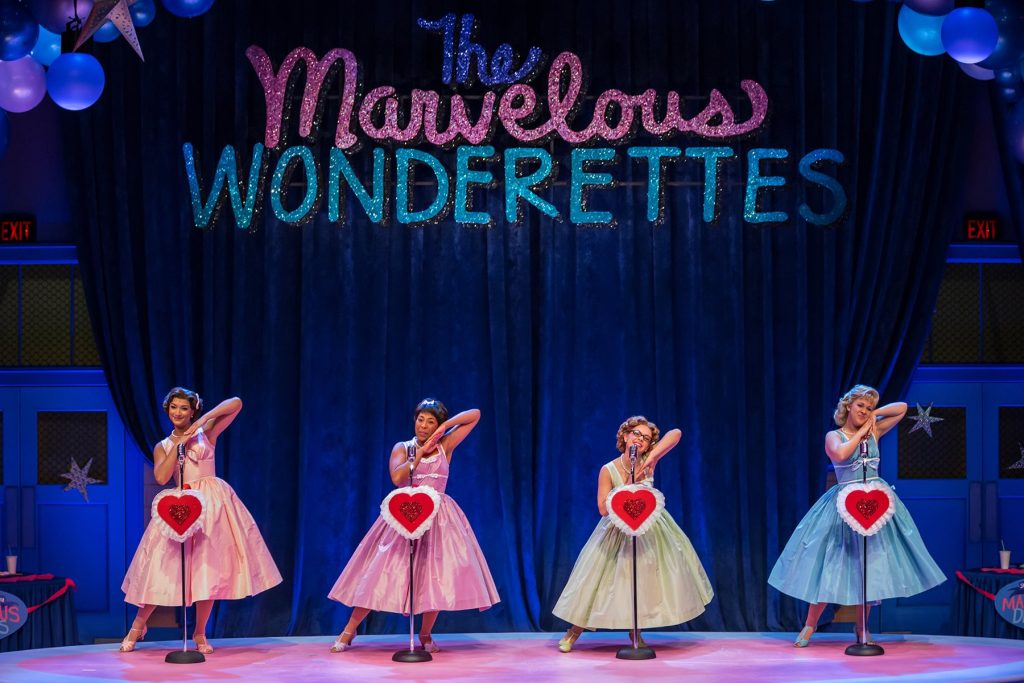 Flash forward ten years, where ACT II takes place in 1968 during the Springfield High School reunion. The Marvelous Wonderettes have all returned, and we get to see how they have changed after all these years (a fifteen-minute intermission in real-time). The women have traded in their ’50s dresses for ’60s go-go boots, and are now performing the biggest hits from Lesley Gore (“You Don’t Own Me,” “It’s My Party,” “Maybe I Know”), Dusty Springfield (“Son of a Preacher Man,” “I Only Want To Be With You”), The Blossoms (“That’s When the Tears Start”) and many more.

The four actors give performances so delightful that, when the time came for the audience to vote on the prom queen at the end of ACT I, I was torn on who to choose. I loved all of these characters, and thought their portrayals were wonderful. 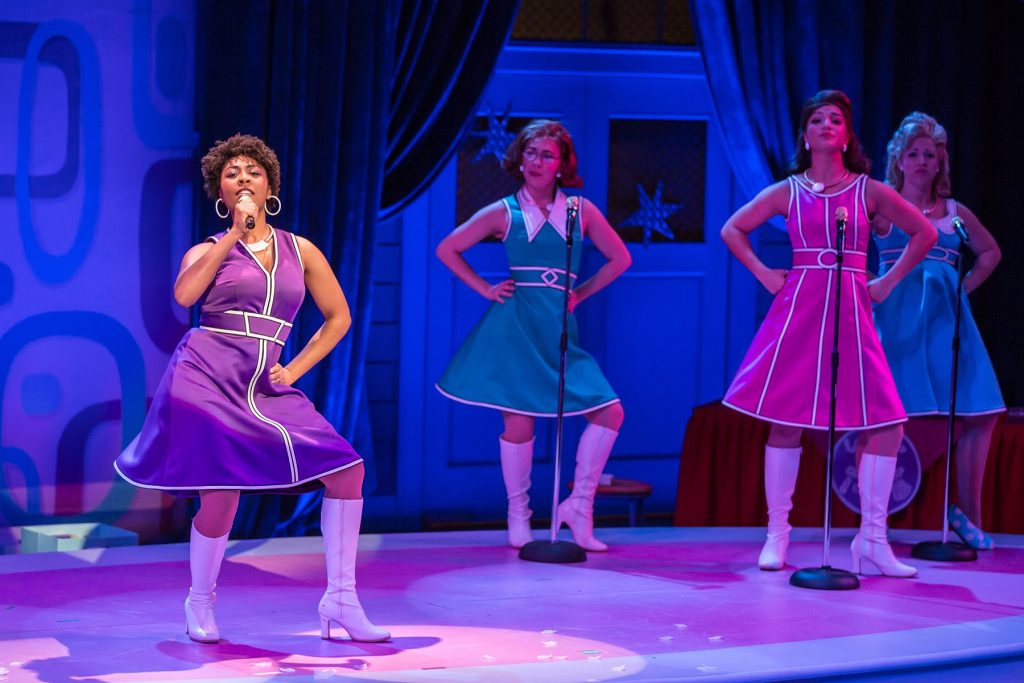 Iris Beaumier gives such a wide array of emotions through her facial expressions and body language – both comedic and dramatic at times. Some of her best moments come when she is trying to step out from behind Cindy Lou’s shadow. Chiara Trentalange plays the modern equivalent of a “mean girl,” who has let her popularity and need for attention overshadow her friendships. She does a fantastic job as her character grows throughout the show.

Morgan Kirner is always bubbly and charming as Missy, the brains behind the Wonderettes. The actor exudes an energy which makes it impossible not to smile while she is front and center.  And Leanne Smith plays Suzy, who plays a bit of an airhead – sticking her gum on the microphone before singing and, of course, retrieving it afterwards. She sells the character exceptionally well, garnering big laughs from the audience whenever she has lines. That is until she starts to sing, and all attention is directed toward her beautiful singing voice. The same goes for all of the women in the show, who dazzle throughout the evening while marvelously emulating the sounds of the ’50s and ’60s. 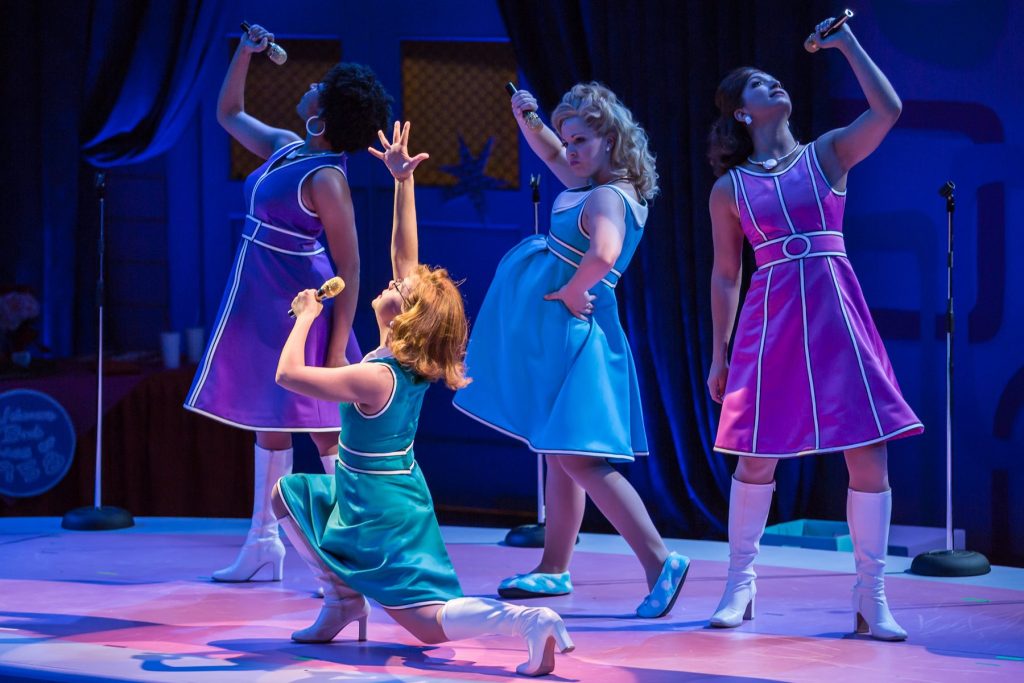 Adam Koch, who wowed us last season with his scenic design for Million Dollar Quartet, has crafted another impressive work of art for the stage. This time Koch has taken the versatile canvas of The Rep and transformed it into a gymnasium floor – which anyone can recognize from their school days. The stage is decorated just like a school dance would be, with careful attention to every detail. Koch’s designs really sell the look and feel of the prom / reunion. Nothing is missed, even the decorated basketball hoops at either side of the auditorium.

The show is directed and choreographed by Melissa Rain Anderson, who perfectly captures what I imagine a ’50s prom would be like. She ensures that the audience really feels like they are there, and makes it easy to get lost in the moment for a couple of hours. I wouldn’t have thought that the choreography would be so impressive for such a simple premise, but I was mistaken. The dancing and movements are all wonderful as the women are constantly switching places and rearranging on-stage. The seamless execution was more of a ballet than I would have ever expected. 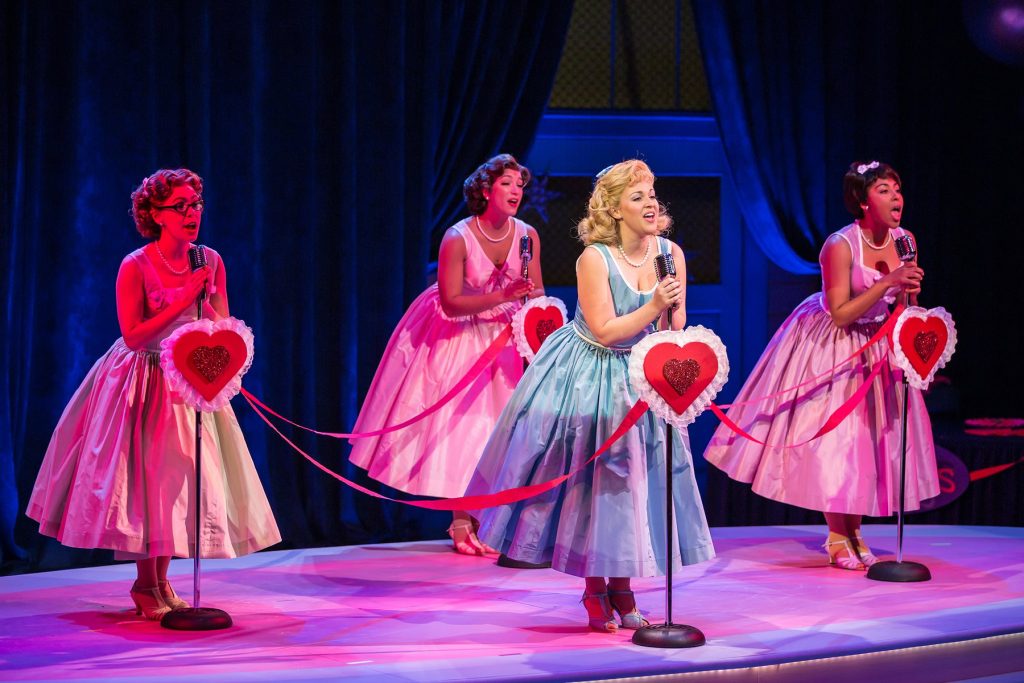 Much like the superb vocals throughout the evening, the instrumentals are extremely important. Music Director Joshua Zecher-Ross does a fantastic job leading the band while also playing the keyboard. I noticed that his job almost never ends, as I eyed the monitor on the side of the stage. Even in-between each number, he is providing the soundtrack for the show from behind the stage. It was a fantastic performance by all of the musicians in the 5-piece band.

The ’50s and ’60s were long before my time, so I never had a chance to experience the eras in person. Until now I’ve lived it only through records, television, and films growing up. But I feel like I’ve finally been able to experience at least a little piece of that Americana, and had a blast in doing so.  THE MARVELOUS WONDERETTES is show full of incredible music, talented performances, and plenty of laughs. It’s had me feeling nostalgic ever since – for a time that I’ve never really lived through. But I feel a little bit closer now.

THE MARVELOUS WONDERETTES plays The Repertory Theatre of St. Louis now through January 28. The running time is 1 hour, 42 minutes, performed with one 15-minute intermission. For tickets and more information, visit repstl.org. 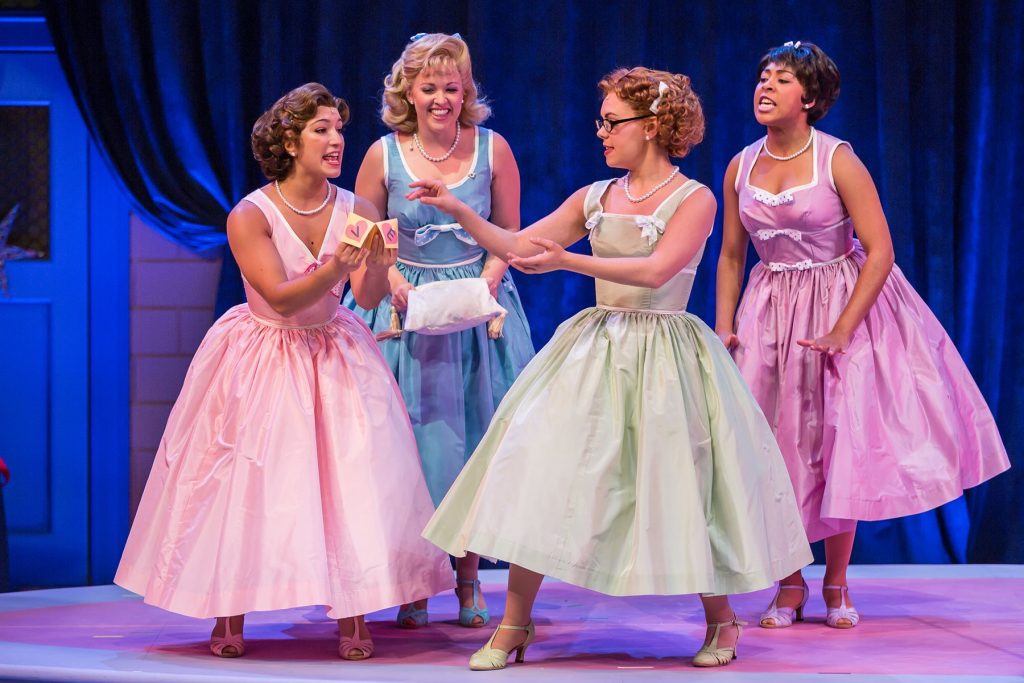