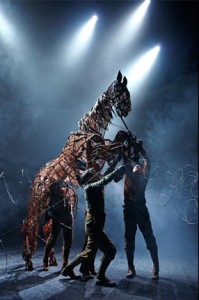 There are many things that come to mind upon seeing War Horse, the first of which is the impressive puppetry work done within the show. The next thing is how the play accomplishes so much with so little. The setting starts out shortly before World War I in Devon, England, where young Albert Narracott, has just received a new horse from his father. His father, Ted, won the horse to spite his brother Arthur, and has spent the family’s mortgage money because of the heated sibling rivalry. Despite the way in which this came about, and the displeasure of his mother, Albert tries quickly to train and raise the horse, which he has named Joey.

We watch Joey grow up on stage, and blossom into a thoroughbred horse, which isn’t needed on the Narracott farm. When Albert’s father makes a bet with his brother for the horse, we see the true resolve of Albert and Joey. In order to keep the horse, Albert must teach Joey how to plow within a week, a daunting task given his breeding history. If he succeeds, he gets a promise from his father that he can keep the horse.

This is the first major plotline in War Horse, and one that takes up almost the first third of the production. Later in the play we experience war through the eyes of a horse, and his displaced owner.  The plotline stretches all across World War I and pieces of Europe.  As the play stretcheed on William Tecumseh Sherman’s quote, “War is hell.” kept crossing my own mind.

The biggest draw of War Horse is the fantastic puppetry of the horses within the show. Three actors control every movement of the horse, and give it a lifelike quality that allows for true empathy for the animal portrayed in the story. It is something that has to be seen to be believed. Every movement is concise and natural, and has a realistic quality that is slightly eerie. The puppeteers are aided by a unique design that incorporates them slightly into the story. They are dressed as farmhands, and the puppeteer who is controlling the head and neck, looks like a guide for the horse. The look of the puppeteers allows them to blend seamlessly with their character, and draws the focus on the horse itself.

This isn’t a Broadway style production with elaborate sets, instead letting the puppetry and cast weave the story, rather than over the top sets. The production lets you fill in the blanks, and adds only little elements to give a setting. Above the stage is a ripped piece of parchment, which has sketches projected on it, and the rest of the set is a black stage filled with actors. It’s amazing how well the style works. It allows the eye to be drawn to the actors and the puppets, rather than focus on objects around them.

Equally impressive is the cast. Like a lot of larger productions, many actors fill multiple roles within the production. As the play jumps around to different parts of the war, it’s hard to remember that some of these actors were just recently playing completely different characters just moments ago. The supporting cast is just as strong as the main cast, and contributed no weak links in the production.

Carrying the production is Alex Morf as Albert Narracott. Morf does a great job of lending a human element to the story, and giving a reason as to why we should care about Joey. He does an impressive accent, and never breaks character throughout the course of production. There were a couple actors who slipped with their dialects from time to time, but Morf stays consistent throughout the entirety of his time on stage.

One other standout in the production is John Milosich, who guides the show with a series of songs that break up scenes, and move the play along when needed. Milosich has a clear and beautiful voice with an atmospheric quality that rounds out the rest of the production.

War Horse is a great show for new theatre patrons. The show is fairly quick paced for its length, and has easily relatable characters, despite taking place a century ago. Those who want to check out a show at the Fox Theatre, but aren’t a fan of musicals, would be better to see something like War Horse. The show continues at the Fox until March 24th.