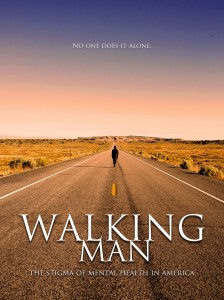 With the success of Rob Thomas’s recent Veronica Mars project, film oriented Kickstarter projects are being given new light. While some have demonized the Veronica Mars project as a major Hollywood studio using Kickstarter to leverage its investment, there are a number of truly deserving campaigns that use Kickstarter to organize real grassroots movements. One of these projects is a documentary by local filmmakers Josh Salzberg and Eric Norwine.

Their film Walking Man is currently in development and intends to shed light on the stigmas surrounding mental health through the story of Mark Norwine. Throughout his life, Mark was told he suffered from the common mental health condition of depression. It wasn’t until more recently that Mark learned depression was only half his battle. The other half involves periodic bouts of what mental health clinicians call Mania and the diagnosis of Bipolar Disorder. Bipolar Disorder is characterized by cycling between periods of depression and mania, where elevated mood and very high levels of energy are common.

Mark believes that many others have suffered like him and hopes to bring attention to the realities of mental illness and the stories of those like him. The filmmakers will follow Mark from their kickoff event in Kansas City along the Katy Trail to St. Louis in an effort to not only process the issues he has struggled with, but to start a statewide and perhaps national discussion.

For their documentary on Mark, filmmakers Eric Norwine and Josh Salzberg will chronicle his journey and interview various mental health experts to provide new insight to the role of mental health care in America.

It isn’t every day that local St. Louis filmmakers are on the verge of national recognition for their accomplishments in film. Josh and Eric intend for Walking Man to be showcased at international film festivals such as Cannes, Sundance, Tribeca, Toronto and Traverse City. This is our opportunity to support local filmmakers creating a film in Missouri for a great cause.

For more details, check out Walking Man’s Official Website and their Kickstarter page to be a part of this project.

Do you or someone you know suffer from Bipolar disorder or other mental illness. Start the conversation in the comments section below.