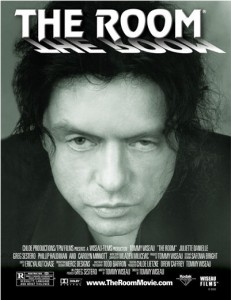 “The Citizen Kane of bad movies.” This is how The Room is often described. It isn’t far off. It might actually be one of the most unintentionally funny films you will ever see in your life. Add in the fact that creator and star Tommy Wiseau put $7 million into the project, and you might find yourself a little depressed.

The room is described as a melodrama, but it comes off as more of a dark comedy by a team of poorly trained actors. The film stars Tommy Wiseau as the well meaning Johnny, who only wants to provide for his fiance, Lisa (Juliette Danielle). Everything appears to be moving fine for the couple, we are even treated to a long love scene where Johnny appears to make love to her stomach for half of it. Although, trouble brews as she decides (out of left field) that she wants Tommy’s best friend, Mark (Greg Sestero). The rest of the film is populated with close calls between the lovers.

It is really hard to explain just how awful The Room is. Everything from the stilted dialogue, to the painfully bad acting are convincing enough to earn it’s worst movie ever title. Dialogue jumps from ludicrous point to the next. In one scene Juliette’s mother jumps from talking about a back stabbing brother, to a positive breast cancer result, and it is never mentioned again. (Click here to watch the clip.)  Characters toss around a football for no apparent reason, and when I say toss, I mean literally toss.  One specific scene takes place in an alleyway where characters stand feet apart, and toss the pigskin. Even more amazing, is that a throwaway character seems to get hurt in this scene for no reason.

The film is chock full of ridiculous moments, which make you wonder how no one noticed it was this bad during the filming? If Quentin Tarantino is the person that proves you don’t need an expensive film school education to make a great film, Wiseau is the counter to that rule. Just about everything bad thing that can occur during a film does throughout the course of the film.

List of a handful of ridiculous elements in The Room:

These are just a few of the numerous inconsistencies, and other odd things within the film. It is worth the price of admission just to have a good laugh, and serve as a what not to do in filmmaking course.

Grade: F (but A+ if you are going in expecting to laugh at a bad movie)