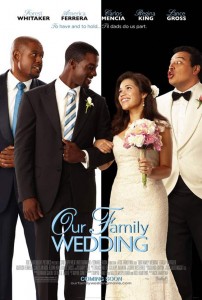 This week I saw two romantic comedies, both of them were derivative, both of them had an impressive cast list, but only one of them was fun to watch. (Read our review of She’s Out of My League.) Unfortunately, Our Family Wedding was the loser of the draw, and the product of one of the worst times I’ve had at the theater in a while.

Racial tensions flair in the most uncomfortable way in Our Family Wedding. Lucia (America Ferrara) and Marcus (Lance Gross) are in love, but they have yet to tell their family of their plans to get married. They go to LA in hopes of telling their family their plans, and hope for their blessing. However, a little turn of events causes their fathers to meet before the fateful dinner. This first meeting sours their outlook on each other, and causes much of the tension throughout the film.  The lovers must fight against the pressures of their family, especially their fathers.

The biggest problem with Our Family Wedding is that most of the main characters are entirely irredeemable.  The amount of forced conflict created by the plot it beyond ridiculous. When one character apologizes, the film finds another silly way to keep tensions flowing. Every bit of comedy seems wrung from its cast in a pained way that leaves it flat. For a story about tensions between an interracial couple the film is surprisingly racist.  The film devolves so much into stereotype that it leaves everyone around it looking moronic.

There are a good amount of quality actors in this film that are left high and dry by an awful script. Among these are Regina King who manages to scrape out the best performance of the film, and one of the few characters that you don’t hate throughout. America Ferrara and Lance Gross do seem to have enough chemistry to the role, but their casted families have none.

Both Forrest Whittaker and Carlos Mencia should be ashamed of themselves. These are the type of roles that you hope no one sees. You know it is bad when you hope for a cataclysmic event to end two main character’s lives to take them out of the film. Whittaker is especially a esteemed enough actor by now to know not to take a role like this. Nothing good can come from the overly stupid plot points and bad decisions made by characters.

There isn’t much good I have to say about Our Family Wedding, and this is why I can’t recommend it to anyone. If you are fan of films where the characters make continually bad choices that seem out of character only to move along a stale plot, then this might be the film for you.  Hopefully this doesn’t kill the careers of some of the more talented actors in the film. I nominate Carlos Mencia to suffer.