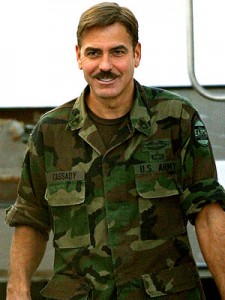 Ha, this has to be one of the funniest trailers I have watched in a while. I hadn’t really read too much on this movie, other than it’s spectacular cast, which includes Ewan McGregor, George Clooney, Kevin Spacey, and Jeff Bridges. Those people working together give me enough reason to go see it. It looks damn hilarious too. Clooney is very good at picking his roles (unlike McGregor and Spacey), so he is an actor I trust. Bridges is another actor who seems to usually choose his roles pretty wisely. All this together with this laugh out loud funny trailer, and I think I have another film on my must see list.

A reporter (Ewan McGregor) delves into the world of military psychic regiments during the Iraq War in this adaptation of the Jon Ronson book The Men Who Stare at Goats. George Clooney, Kevin Spacey, and Jeff Bridges star in the Smoke House/BBC Films production. – Jeremy Wheeler, All Movie Guide