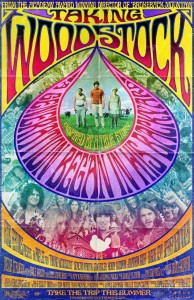 Ang Lee’s latest is his lesser effort as of late as he starts off on the right foot but slowly dissolves into a bit of a mess with no narrative to speak of for the second half.

Elliot Teichberg is a want a be artist living in New York City, only to see most of his income be thrown into his families inn that resides in upstate NY. Scrapping to get by, his mother is a stingy Jewish woman that is a bit crazy on top of that while his father just quietly sits by and lets things happen. Forced to move back home,Elliot begins to find new ways to spruce up his families inn to attract new business while splitting time as being the local chairman on the commerce committee of White Lake. Elliot who keeps one ear to the arts and music scene learns about a music festival that can’t find a home has been looking for a place to call home in the surrounding Catskills communities and Elliot invites them up to his inn as a potential site for the festival. Michael Lang is the face of Woodstock Ventures and when he arrives to White Lake he and Elliot find the perfect spot for their festival and begin to put in motion a final attempt to get their “little” music festival off the ground.

The film starts off really great as a building up and making things happen sort of film as the principle players try and pull off Woodstock in White Haven with Elliot’s family serving as a counter lifestyle getting thrown upside down by the hippie invasion of their inn. The first hour of the film is a well paced and executed story that is really interesting and engaging only to have all that build up disappear once the actual concert starts. From here we dive into a trippy three day bout of self discovery for Elliot that fails to capture the excitement and engage us as the first half of the film did.

The first half of the film gave us some tastes to this eventual direction as there is a bit of let’s throw it at the screen and see if it sticks mentality of the themes that Lee tries and squeezes into the picture. And I think one of the big problems with this film is its inability to really define itself as what it wants to be. Social commentary on prejudice of the day, a hippie culture showcase, a look behind the curtain of how Woodstock came to be, a look at anti-Semitism, an interpretation of the aspects of drug culture, a coming of age film, a homosexual self discovery film, I mean you can classify this film as any of these themes and probably even more; it is quite the smorgasbord of ideas. And I’m not saying these aren’t worthy themes, it’s just that Lee can’t really decide what he wants to focus on while never really doing much justice to each of these themes, they all feel rather just thrown in.

The complete lack of direction for Elliot’s “experience” over the course of the three days of Woodstock makes a bit of sense concerning the drugs and culture around the event but there is no rhyme or reason to any of it, and I don’t find it terribly profound by any means. We come across some Woodstock staples, LCD trip, mudslides, electrified grounds, but nothing particularly is all that interesting. Lee’s timidity around the homosexuality of Elliot is also quite odd, sure it was a secret to his family but that doesn’t mean he has to shy away from showing his feelings to the viewer.

The actors on display are thankfully very, very good though and make the film more worthwhile than it probably deserves. Henry Goodman is quite but extremely effective as Elliot’s father, and it’s almost scary to see how close he resembles Eugene Levy who is also quite good in the film. I thought he was playing to parts, the father and a farmer, but Goodman is fantastic, where as Levy plays just a twist on Levy as usual, but he is quite funny. Emile Hirsch is good in a bit part as a Vietnam vet local that is dealing with being back home. Jonathan Groff is delightfully sublime as Michael Lang, always carrying a wry smile and looking blissful. Liev Schreiber is the stand out in the group as a cross dressing “security advisor” providing a number of laughs and silliness. Imelda Staunton is also quite spectacular, if a bit over the top, as Elliot’s stingy mother, but she completely disappears into the character. Paul Dano also makes a cameo appearance as a Woodstock “almost” patron on a hill and his mellowed out drug induced speech is quite believable. Lastly there is Demetri Martin as Elliot and he is a bit all over the place. His quite and calm demeanor works for the character a majority of the time and he drops a number of good one liner’s as well. What hurts him is the dramatic stuff that sometimes he just seems not quite up to the task for. He gives it a good effort and he is a rather new actor, but he doesn’t quite have the chops yet to really carry an entire picture.

In the end, Taking Woodstock is an average effort from an extraordinary director that almost created something special. Starting off on the right foot the film quickly dissolves during the second half of the film. The film feels like a bunch of ideas and themes just kind of thrown out there and hoping something resonated with the crowd and nothing really does anything special. The film is quite good when it is a making of Woodstock film but Elliot’s journey is far less interesting. Now, granted, I wasn’t even a thought process in my parents mind when Woodstock happened, so maybe the imagery and scene won’t resonate with me, but the story still should be able to pull me in as it goes, not lose me.

Taking Woodstock is a C-