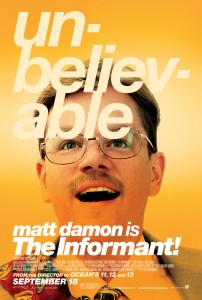 First off, let me explain to everyone that I am a former Decatur resident. I have spent more than half my life living off Lynnwood Dr., hanging out at Scovill Zoo. And most of my in-laws and family members are either former or current ADM (Archer Daniels Midland) employees. So with that being said, when I heard around two years ago that the same team of producers, actors, and the director of “Ocean’s 11” were going to film a movie in old Dtown – I was excited. Did the movie live up to my excitement? In one word… yes.

“The Informant!” is about a serious subject; something that happened in real-life right in the town of Decatur, IL. Mark Whitacre, played by Matt Damon, is a whistle blower who spied for the FBI. He does so to expose what could have been a huge international corporate corruption. Steven Soderbergh directed the screenplay written by Scott Burns, approaching it more of a comedic fashion than his own “Erin Brockovich.” He does this for a reason. The reason, you ask? Mark Whitacre is bipolar – and the film is shot in away that makes you feel you ARE Whitacre.

Whitacre, who is just a regular guy, graduated from Ohio State University with a PhD in Biotechnology. He became the youngest Vice President that ADM ever had. But he ends up getting over his head. Damon keeps you on your toes with Whitacres’s happy, not a care in the world personality. One trick that seems to throw all of the audience off is the running interior monologue, which is a series of voice overs which provides musings on everything from indoor pools to buying ties from Bacharach’s. 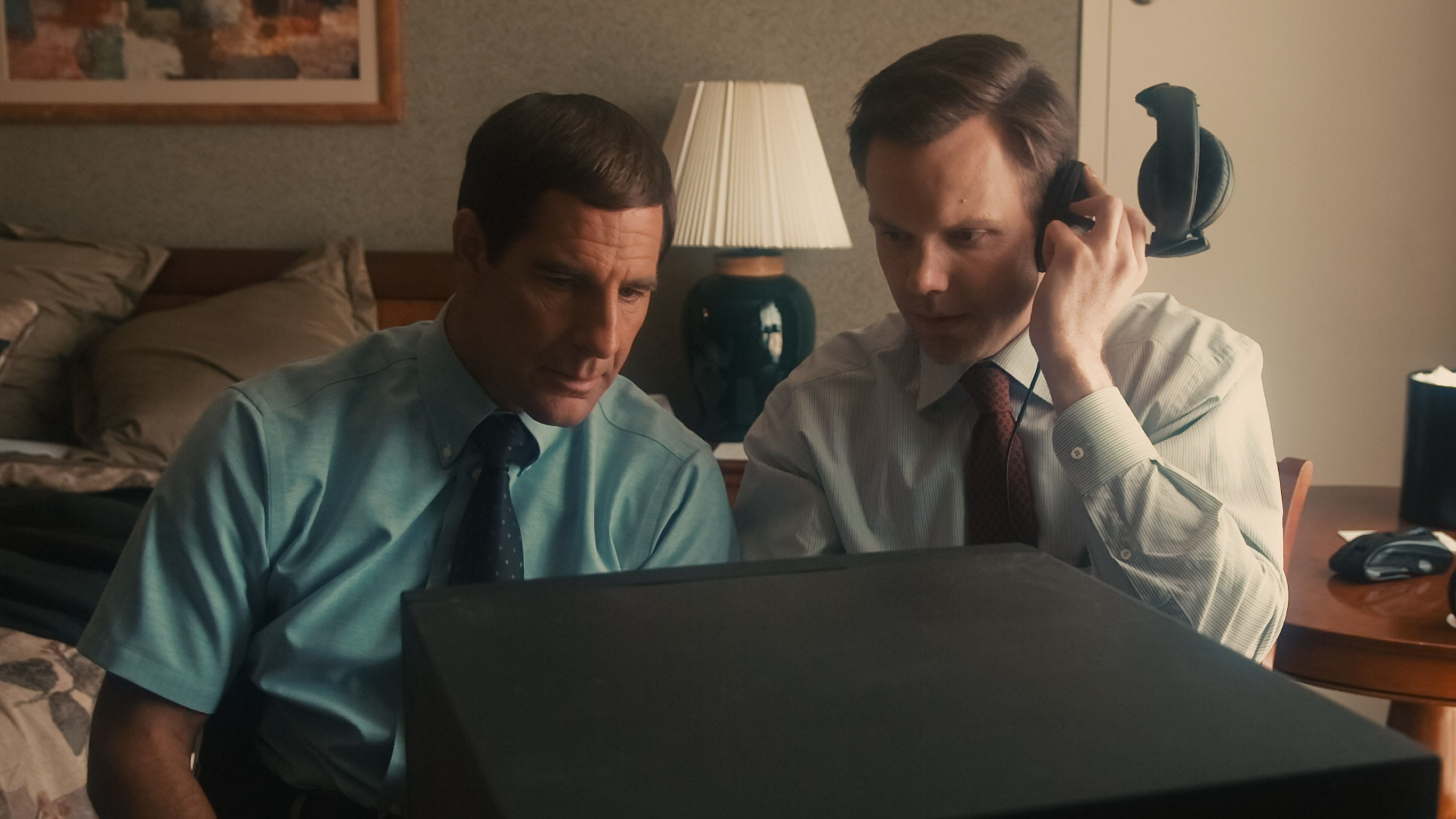 Throughout the film you get an understanding of why ADM is called the “supermarket to the world,” which is because ADM was fixing prices on most everything you would buy at your local supermarket. Whitacre being brought in as president of the new BioProducts Division, had a responsibility to determine why ADM’s production of lysine had faltered. And he had to do something about it. So he tells his boss that the company has been sabotaged by the Japanese. This brings in FBI Special Agents Brian Shepard and Bob Herndon, played respectively by Scott Bakula and Joel Mchale. Whitacre then informs the FBI that he and his bosses had been fixing prices, but agrees to cooperate with the FBI in order to take down the wrong-doers at ADM. Hence the title of the film, “The Informant!”

The film does not follow Whitacre around the entirely around Decatur, but rather a few places in town – including the old Holiday Inn, Lake View Motel, and of course ADM. During the period that Whitacre says he is “0014… because I’m is twice as smart as 007,” we see almost and endless amount of blunders that a real FBI agent would never have done. We follow Whitacre, a hidden tape recorder, and his bosses while traveling around Decatur and the world -meeting with global competitors about price fixing. He is so oblivious as to what he should and shouldn’t do, that at times we see him walk around his office talking into his shirt. And another time he holds a staring contest with a lamp that he suspects contains a hidden video camera that the FBI had planted in a conference room. These incidents, and many similar moments, make the film humorous and very entertaining.

The Informant! is a black comedy about white collar crime. You will laugh out load. People in Decatur will see the Lincoln Lounge turned into a Chinese restaurant, as well as area Hotels, streets, and other parts of town that you have grown to love and hate. Some things you won’t see are scenes that were shot in the Mall, as well as most downtown shots that were also cut. I found myself laughing many times throughout, and I think that people who have lived in Decatur will especially enjoy the film because of their perspective on the situation. But overall, the film is well done and will do very well in theaters. Matt Damon plays a great informant.

“The Informant!” is a B+. I would have to tell you that it is a must see movie, especially if you are from Decatur.

Another Take By Zac: (not from Decatur)
Steven Soderbergh’s latest is a unique picture that spins a pretty serious and messed up character study into a comedy by applying a silly tone and ramping up the absurdity that this actually happened and the results are pretty good for the most part.
Mark Whitacre is a bit out of his element. He is a PHD in biochemistry but was promoted to an executive level at his company ADM and quickly became a valuable asset to the company and began making large sums of money in his new role. One day he receives a phone call from an employee from a rival Japanese company that claims they have a mole in ADM’s midst and he is sabotaging their lysine production and that he needs ten million dollars to make this problem all go away. When the FBI is brought in to assist with the embezzlement proceedings, Whitacre begins to get nervous and he decides to turn informant on his own company as he is afraid that the FBI will uncover the company’s price fixing frauds. From here, the film dives into Whitacre’s exploits as an informant as the story around the man slowly gets weirder and weirder.
Now, Mark Whitacre is a real individual and he did turn informant like the trailers lay out, but the previews are unable to really dive into what the picture is to avoid spoiling things. This is both a good and a bad thing, good because there is a lot that unfolds you don’t see coming, bad because I think I was really caught off guard by how convoluted and weird the story gets. Again this isn’t at all a bad thing, in fact I think the film will play even better the second time around since you know what you are getting into, but just be warned things get a bit crazy. In fact, it is refreshing to see material that is so different and unpredictable, especially in the hands of such talented film makers like Soderbergh and Matt Damon.
The writing in the film is also quite fantastic with the real stand out of it all being the little thoughts of Whitacre’s head that just pop up through out the film. They will give you a laugh every time and some of them are flat out hilarious at times. Any bits where we get lost for a moment in the narrative are quickly corrected as well and things get back on track fairly easily as things tend to get a bit confusing from time to time for a moment as the story jumps around quite a bit. The music selection and score also deserves to be praised as it completely sets the mood and tone of the film as the subject matter could be taken quite seriously. But then you hear this silly carnival like music that reminds you we are having a bit of fun with this and to not get all serious; it really helps the picture cue how you should be taking things in the moment.
Above all else, the main reason to see this film is Matt Damon as Whitacre. Damon is absolutely fantastic, completely handing himself over to the role and making you forget you are watching a man act. The way Damon carries Whitacre is so confident yet so clueless at times it makes it impossible to get a ready on him. We never know to trust Whitacre yet we want to all the same and get swept up by everything he says. Damon has rarely been better than he is here and deserves all the accolades he is sure to garner. The supporting cast is a surprising group of comedians that are surprising because all of them play serious roles for the most part. Joel McHale, Tom Papa, and Patton Oswalt, to name a few, all come in and play against the type we are used to seeing them and the results are quite good. The fact that a lot of the supporting cast are comedians in a serious role lends itself to the fact the film is first and foremost a comedy and I think Soderbergh did a fine job with this casting quirk. Scott Bakula is the second biggest character in the film as Whitacre’s FBI contact and he does a great job of nailing the dry comedy in the role and bounces off Damon just right so that we take his character both seriously but can laugh at everything still. Melanie Lynskey also deserves mention as Whitacre’s wife as she plays the supportive role but like Damon hides something just behind the surface that everything might not be what it seems.
In the end, The Informant! is a unique and fresh comedy that is not only funny but relevant for a story that is now almost fifteen years old. The corporate greed message comes across loud and clear without preaching and Soderbergh tells the story in such a way that we can laugh at the travesty of big business screwing the public. Damon is in top form and is worth the price of admission alone, and as an added bonus you will get to see a clever and unexpecting comedy unfold that is made even stranger in the fact that it is based off a true story.
The Informant! is a B 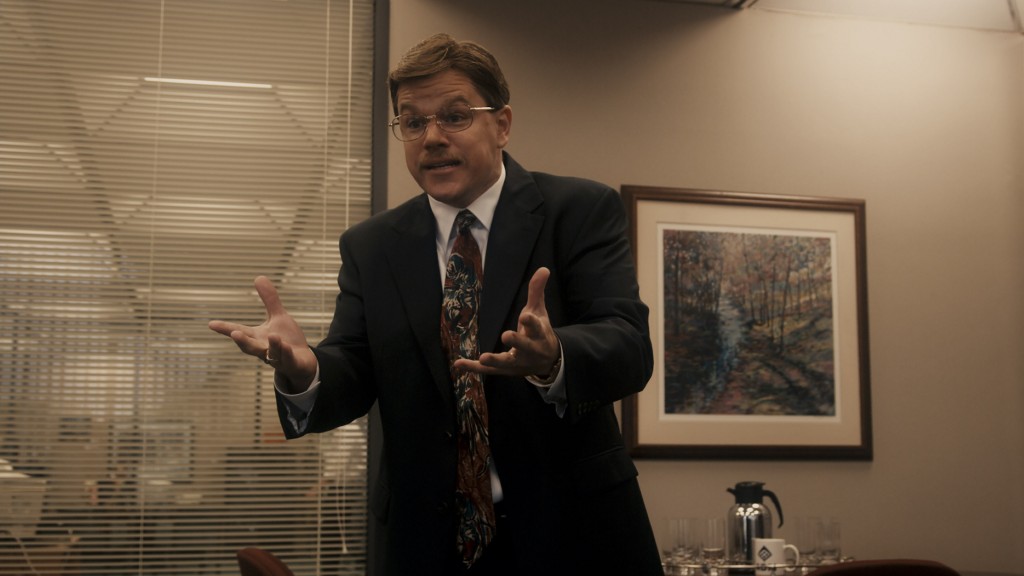