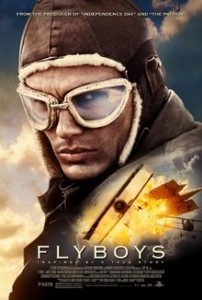 Flyboys is far from a perfect film.  There are much better war films available, and there are certainly much better love stories.  I knew very little about the film going into it.  It seems the movie kind of flew under the radar and stayed there.  But with James Franco as the lead and good aerial fight sequences, its hard not to at least have fun with the film.

The film follows the adventures of the Lafayette Escadrille, young Americans who volunteered for the French military before the U.S. entered World War I, and became the country’s first fighter pilots.  Blaine Rawlings is one of the newest recruits.  After he gets shot down in one of his first dogfights, Blaine is taken care of by the beautiful Lucienne.  The two quickly fall in love in between Blaine’s many fights in the sky.

We are all friends here so let’s be honest, the dialogue and story are inconsistent to say the least.  There are a few moments where you really laugh at what the characters are saying.  And the shifts in pacing and plot can be frustrating.  But the aerial fights featured in this film are truly amazing that you almost forget about the flaws.  The CGI really is impressive with the fights exciting and thrilling to watch.

The other aspect that makes this film worth a watch are the leads.  I have not always been a James Franco fan.  I hated him in Spider-Man 2 and 3, but after those films he has really impressed me.  Now this is far from an Oscar worthy performance, but Franco is a likeable guy who is easy to get behind and root for.  Jennifer Decker is also quite good as Lucienne.  This is probably the only film audiences have seen her in.  All of her other films have been French.

Flyboys isn’t an amazing film.  It’s not my favorite film, but I do think it is underrated.  The film is not completely accurate in its portrayal of weapons, technology, and fighting groups but not many films are now a days.  I suggest you check this out if you haven’t already.  Worst case scenario you can fast forward to the aerial fights.

Have you seen this film?  What did you think?  Let us know in the comments below.