The Rams – Looking Back and Ahead

Well, if last night didn’t lead to an increase in blood pressure medicine being prescribed, nothing will. But, hindsight’s 20/20, and overall 2010 can’t be considered anything less than a massive success for the Rams. I’m gonna look back at last night’s game, the season overall, and look ahead at 2011 and beyond. 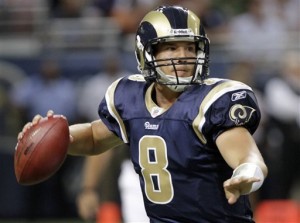 The Rams choked. Plain and simple. Poor execution, poor coaching, poor play-calling. The fact that the refs appeared to be paid off by the Seahawks didn’t help, either.

The biggest culprit last night was the offensive play-calling. Abandoning the run was an unwise decision. Steven Jackson had just eleven carries, but managed 45 yards on those carries. The Seahawks were one of the worst run defenses in the league.

Yet for some reason, Pat Shurmur decided it was a better idea to throw receiver screens. Jackson’s starting to decline, but he’s still one of the top seven or eight backs in the league. Give him 30-35 carries and see how he does.

Jackson’s been an unfortunate victim of circumstances in his career. He’s played for some horrendous teams and only made the playoffs once. He’s sacrificed his body through the years, carrying the load, and although he’s gotten individual accolades, he hasn’t had the chance to play for a championship. And so now, when they have a chance to make the playoffs, Shurmur decided to take the ball out of his hands.

Shurmur really hasn’t done a terrible job this season. A lot of people rip on him for some of his decisions, which have been questionable. But with the dearth of talent at wide receiver, he’s had to cobble together gameplans, and some of them have worked beautifully. Last night, however, was a lesson in frustration.

Pat wasn’t the only person to shoulder blame, however. The Rams’ receivers apparently watched the Colts and Packers play and decided to emulate their receivers, as they dropped several catchable passes from Sam Bradford, who finished just 19 of 36 for 155 yards and a pick. Danario Alexander in particular had a bad game, dropping two perfectly catchable passes and finishing with just three receptions for a total of 14 yards.

Defensively, well, it’s tough to maintain an edge when you’re on the field so much after the offense goes three-and-out so often. That’s the problem they faced last year and last night. Aside from a few plays, the Rams didn’t give up huge chunks of yardage in big plays. Giving up 16 points is usually decent enough to win. The defense stayed tough in the red-zone, giving up just the initial touchdown.

One key difference between the Seahawks’ defense and the Rams’ was the coverage on screens. The Rams tend to play soft coverage, giving up small yards =to prevent giving up big plays. This let the Seahawks get 6-7 yards a play on their screens, whereas the Rams got 2-3.

Questionable penalties and unchallenged plays also contributed to the Rams’ downfall. In particular, the opening scoring drive saw a marginal holding call against Ron Bartell that led to a fresh set of downs for the Seahawks which led to the game’s only touchdown. By contrast, the Seahawks got away with quite a bit the first few series.

I’m getting a little loquacious about last night’s game. Needless to say, the game was easily winnable; poor execution and poor game planning was the difference.

Coming off a 1-15 season, the Rams had low expectations for this season, even after drafting a quarterback first overall.

Fortunately for the Rams, they picked the right guy to lead them. Bradford had a record-setting rookie season, establishing new marks for completions, attempts, and attempts without an interception. His numbers ended up being relatively modest for a quarterback [354/590, 60% completion rate, 18 TD, 15 INT, 76.5 rating], but given the fact that he’s a rookie and was working with a modest receiving corps, those numbers are a solid foundation and were far superlative to last year’s production by Rams quarterbacks. Bradford is a fast learner and his durability questions have been answered. There are a lot of comparisons out there contrasting Bradford’s rookie season with those of the contemporary superstars, so I’m not gonna go into one. There aren’t any guarantees he’s going to have a Hall of Fame-worthy career, but odds are he will be an elite quarterback within a few years, luck permitting.

Jackson had another 1,000 yard rushing season, finishing with 1,241 yards on 330 carries and six touchdowns. However, his 3.8 yards-per-carry average was the lowest of his career by 3/10 of a yard. Years of shouldering the offensive burden are beginning to take their toll. Still, he managed to make the Pro Bowl, the Rams’ lone representative. He managed to overtake Eric Dickerson as the Rams’ career rushing leader with 7,948 yards. He also added 348 receiving yards, pushing his career total to 2,670 yards. Ken Darby, the primary backup, averaged only 3.1 yards a carry, showing the Rams’ need for a capable backup.

I’ll say this, the Rams receivers have the potential to be a solid group. Losing Donnie Avery in the preseason was a big blow; say what you want about him, but he’s the team’s best deep threat. Mark Clayton came over in a trade and took over as the top receiver, getting 23 receptions for 306 yards and two touchdowns, but then he was lost for the season in the game against Detroit. Alexander has shown flashes of potential, but needs to work on his consistency. He did manage  20 receptions for 306 yards and a TD in eight games; durability will remain an issue. Danny Amendola [85 receptions, 689 yards, 3 TD] and Brandon Gibson [53 receptions, 620 yards, 2 TD] were the Rams’ top two receivers. Amendola is a solid slot/possession receiver, but he lacks the size and speed to be a true number one. Gibson has made improvements to his catching and consistency, but he too lacks the top-end talent of a star.

Tight end production was improved from last year, as well. Daniel Fells [41 receptions, 395 yards, 2 TD] and Billy Bajema [14 receptions, 145 yards, 2 TD] provided solid targets for Bradford. The tight end on the roster with the most potential is Mike Hoomanawanui, who had 13 receptions for 146 yards and three TD, but a rash of injuries prevented him from playing a full season. Ditto Fendi Onobun, who only had two receptions for 14 yards.

The offensive line got a little more consistency this year than last year. Roger Saffold, the second-round pick from Indiana, took over as starter at left tackle and played very well. Jason Smith switched to right tackle and fought through injuries to have a solid sophomore season. It looks like the ends of the offensive line will be in place for years. Jacob Bell, Adam Goldberg, and Jason Brown formed the interior line, and although they did a pretty solid job of protecting Bradford, their run-blocking was inconsistent. Still, they held up pretty well over the course of a full season, avoiding serious injury. The continuity no doubt helped their chemistry.

Defensively, the Rams improved in most statistical categories, thanks in no small part to the improved offense. With more time on the sidelines to rest and plan, the defense stayed stronger longer in the game and kept the team in most games. The front four was able to consistently pressure the quarterback. The team totaled 43 sacks, with James Hall [10.5] and Chris Long [8.5] leading the team. James Laurinaitis has emerged as a vocal and demonstrative leader. Getting him in the second round last year was an absolute steal.

On special teams, Josh Brown set a career high with 33 field goals in 39 attempts. He was particularly strong from long range, going 7 for 9 from 40-49 yards and 3 for 4 from beyond 50 yards. Donnie Jones, a Pro Bowl alternate, averaged 45.5 yards per punt and a 40.0 yard net. He has consistently been one of the Rams’ top performers and the fact that he has yet to make a Pro Bowl is a shame.

Fortunately, 2010 provided a solid foundation upon which to build for the future. The Rams made great strides and should have the best quarterback in the West again. A nine or ten win season is not out of the question if the Rams continue to improve. It won’t be easy, however, as next year the Rams visit the Giants, Steelers, and Packers, and host the Ravens, Eagles, and Saints. But the Rams could easily go 5-1 or 6-0 against the division and play the Redskins, Bengals, Cowboys, and Browns.

The number one priority in my opinion [although I don’t think I’m alone] that the Rams need to address is wide receiver. Hypothetically, Avery, Clayton, Alexander, Gibson, and Amendola would make a solid group of receivers; however, with the exception of Amendola, reliability and durability are major concerns. Bradford is a major talent and he needs a solid number one receiver to throw to. Imagine if the Rams were able to procure a superstud like A.J. Green or Alshon Jeffery. Mardy Gilyard will get another chance next season, but his stunning lack of progress this season might put him on a very short leash.

There are several other areas that need to be addressed, as well. The Rams need to start developing a running back to replace Jackson, as he will most likely wear down within a year or two. They also need a change-of-pace back to spell Jackson, perhaps a speedy back who can run around the tackles instead of going between them. A solid run-blocking guard could help solidify the inside of the offensive line, although this could be addressed through free agency or later in the draft.

Defensively, Chris Long has established himself as a solid defensive end, and James Hall had a career year, but he is nearing the end of his career. The Rams could use another solid pass rusher. Linebacker and cornerback are two other areas of concern for the Rams. Laurinaitis is a strong mike LB, but the team could use a solid strong and weak LB. Other than Bradley Fletcher, the cornerbacks aren’t exactly a forte for the team, either. Ron Bartell is capable of making tremendous plays, but he’s also prone to giving up big plays.

As far as coaching, Steve Spagnuolo has emerged as a solid leader who knows how to treat the team. His turnaround of the team has been remarkable. On the other hand, he needs to remember that he is a defensive-minded coach and must remain hands-off when it comes to offensive playcalling. He must either turn complete control over to Pat Shurmur and let him loose the dogs or find another offensive coordinator who can take full advantage of this team’s talent. The Rams could easily have had ten wins this season; going into your shell when you have the lead just isn’t the answer. The Rams must have an aggressive, go-for-the-kill mentality.

On defense, the Rams have made strides under Ken Flajole; now, they need to continue improving. They reduced the amount of points scored per game; now, they have to work on the yardage given up. The Rams got a lot of sacks and a decent amount of negative-yardage plays, but they also gave up some big plays and high-average gains. Cut down the yardage-per-game by 50, 60 yards, and the Rams will give themselves a much better chance to reach double digits in wins.

Many of the tools are in place. The Rams are just another solid draft away from being true competitors in the NFC. A lot of the bandwagon fans that abandoned the team in their lean years are starting to return. 2010 was a pivotal year in the return to respectability. 2011 could be the year they make the full leap.