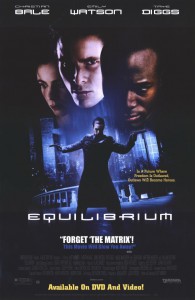 The first time I saw Equilibrium was opening weekend.  My dad and I were two of the few people who saw it then seeing as made only $541,512 those first three days.  I knew nothing about the film going into it.  My dad had heard of it online and asked if I wanted to join him.  I never turned down an opportunity to see a movie for free.  I left the theater in love with everything about the film.  The look, the action, the actors, the sets were all just so perfect to me.  Since that first viewing, I have learned that Equilibrium was not nearly as original and unique as I thought.  But it still stands as a film that I enjoy watching again and again.

In the nation of Libria, there is always peace among men. The rules of the Librian system are simple. If you are happy, you will be arrested. If you cry, the law will hunt you down. If you read a contraband book or so much as look at a smuggled painting, you’ve committed a crime. To keep the peace, citizens must take their daily doses Prozium, a powerful designer drug that stops feelings dead and keeps everyone on an even keel. Refuse to take the drug and special police will find you. Up until now, top-ranking government official John Preston has believed in this system, has upheld the system as a highly-trained “Cleric” who seeks out and destroys those who don’t take their pills. But then he skips his own dose of Prozium–and discovers an incredible new world of sensation that gives him the passion to fight for freedom.

Christian Bale headlines the cast as John Preston.  There is not much that can be said about Bale in the performance.  He has turned in outstanding work in almost every film he has been in.  This is no different.  It’s amazing to watch him through the film discover the emotions that he has been trying so hard to suppress.

Bale isn’t the only one to turn in great work.  Sean Bean has a bit part in the opening of the film.  Though small, he makes use of his time well.  Taye Diggs is fantastic as Preston’s newly appointed partner.  The scenes with Bale and Diggs together are some of my favorite in the movie.  They play the dialogue between them very well in particular a training fight sequence that is choreographed quite nicely.  William Fichtner and Emily Watson also play supporting characters who have already given into their emotions.

While the acting is great the highlight of this film is the action.  Director Kurt Wimmer invented his style of gun kata in his backyard which is used in the film.  What exactly is gun kata?  Gun kata is a martial arts technique that bases stance and gun fire on statistical….just see the movie.  They explain it better in there.  We get gun fights.  We get swords fights.  We get pistol whip fights.  We get training staff fights.  Everything an action fan needs.

As stated before, this is not an original story.  Think 1984 and Brave New World with action.  But I do love this film.  And Christian Bale is always amazing to watch.  I definitely think this is a film that needs to be seen.

Fun Fact: The film was not given a wide release because it had already run into profit as a result of overseas sales, and Miramax didn’t want to risk turning a money maker into a loss.