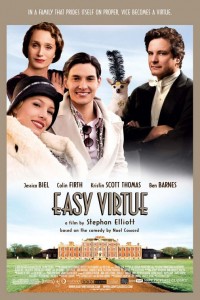 My dad is a tough cookie.  There are very few comedies that he enjoys.  There are even less that he wants to see.  But Easy Virtue is not your typical comedy that comes out these days.  It doesn’t star a great comedic actor.  It doesn’t have a gratuitous amount of sex, drug, or alcohol jokes.  This is Meet the Parents in the English country side in the 1940s.  And a little classier.

John Whittaker, a young Englishman, falls madly in love with Larita, a sexy and glamorous American woman, and they marry impetuously. However when the couple returns to the family home, his mother Mrs. Whittaker has an instant allergic reaction to her new daughter-in-law. Larita tries her best to fit in but fails to tiptoe through the minefield laid by her mother-in-law. Larita quickly realizes Mrs. Whittaker’s game and sees that she must fight back if she’s not going to lose John. A battle of wits ensues and sparks soon fly. Mrs. Whittaker manipulates every situation to undermine her, while Larita remains frustratingly calm and engineers sassy counter attacks. Before long, Mrs. Whittaker’ s manipulation starts to work on John and Larita feels their love is in danger of slipping away.

This is a film led by its performances, and every actor here fits their parts perfectly.  Jessica Biel hasn’t exactly had a shining career.  The only other film she has done that I really love is The Illusionist, but that was due largely to Edward Norton.  She does a fine job here though as the bold Larita.  Ben Barnes entered into the audiences radar in 2008 with The Chronicles of Narnia: Prince Caspian.  Fortunately he has branched out from that dying franchise.  Roles like this and the Dorian Grey remake released earlier this year really show the man can act.

The movie truly belongs to Kristin Scott Thomas and Colin Firth as Mr. and Mrs. Whittaker.  Colin Firth’s part is much smaller, but the scenes he is in are fantastic.  It’s amazing to see Firth make even a small part memorable.  Kristin Scott Thomas is wonderful and completely believable as the family matriarch.  She wants nothing but the best for her son and believes that Biel is certainly not it.  I have only seen Thomas in a few films, but from what I read she is a fantastic actress who turns in work like this regularly.

Easy Virtue is not great.  It’s predictable a predictable story that has been done before.  But it is a lot of fun.  The characters are likeable, and the movie made me laugh on a consistent basis.  Unfortunately, this film never saw a wide release so it flew right under a lot of people’s radar.  If you are looking for a fun comedy then look no further.

Have you seen this film?  What did you think?  Let us know in the comments below.